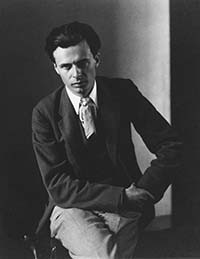 Aldous Huxley published The Perennial Philosophy in 1945, just after the end of the Second World War, sending into a divided world a much needed work of unification. His book is grounded in the idea of the ‘philosophia perennis’, the idea that all religions in the world have in common the human yearning to experience the divine. In this passage, taken from the chapter, ‘Truth’, Huxley looks at different types of knowledge, essentially cleverness versus spiritual wisdom, lamenting society’s current obsession with the former while acknowledging that it is only through a nurturing of the latter that a person can move closer towards a true knowledge of the divine.

Non-rational creatures do not look before or after, but live in the animal eternity of a perpetual present; instinct is their animal grace and constant inspiration; and they are never tempted to live otherwise than in accord with their own animal dharma, or immanent law. Thanks to his reasoning powers and to the instrument of reason, language, man (in his merely human condition) lives nostalgically, apprehensively and hopefully in the past and future as well as in the present; has no instincts to tell him what to do; must rely on personal cleverness, rather than on inspiration from the divine Nature of Things; finds himself in a condition of chronic civil war between passion and prudence and, on a higher level of awareness and ethical sensibility, between egotism and dawning spirituality.

The “wearisome condition of humanity” is the indispensable prerequisite of enlightenment and deliverance.

But this “wearisome condition of humanity” is the indispensable prerequisite of enlightenment and deliverance. Man must live in time in order to be able to advance into eternity, no longer on the animal, but on the spiritual level; he must be conscious of himself as a separate ego in order to be able consciously to transcend separate selfhood; he must do battle with the lower self in order that he may become identified with that higher Self within him, which is akin to the divine Not-Self; and finally he must make use of his cleverness in order to pass beyond cleverness to the Intellectual vision of Truth, the immediate, unitive knowledge of the divine Ground. Reason and its works “are not and cannot be a proximate means of union with God.” The proximate means is “intellect,” in the scholastic sense of the word, or spirit.

At no period in history has cleverness been so highly valued or, in certain directions, so widely and efficiently trained as at the present time.

In the the last analysis the use and purpose of reason is to create the internal and external conditions favorable to its own transfiguration by and into spirit. It is the lamp by which it finds the way to go beyond itself. We see, then, that as a means to a proximate means to an End, discursive reasoning is of enormous value. But, if in our pride and madness, we treat it as a proximate means to the divine End (as many religions have done and still do), or if, denying the existence of an eternal End, we regard it as at once the means to Progress and its ever-receding goal in time, cleverness becomes the enemy, a source of spiritual blindness, moral evil and social disaster. At no period in history has cleverness been so highly valued or, in certain directions, so widely and efficiently trained as at the present time. And at no time have intellectual vision and spirituality been less esteemed, or the End to which they are proximate means less widely and earnestly sought for. Because technology advances, we fancy we are making corresponding progress all along the line; because we have considerable power over inanimate nature, we are convinced that we are the self-sufficient masters of our fate and captains of our souls; and because cleverness has given us technology and power, we believe, in spite of all the evidence to the contrary, that we have only to go on being yet cleverer in a yet more systematic way to achieve social order, international peace and personal happiness.

From: The Perennial Philosophy

1 thought on “Aldous Huxley on Cleverness and the Perennial Philosophy”