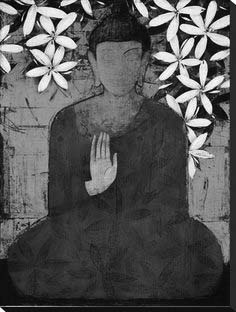 Sherab Chödzin Kohn is a student of Tibetan meditation master Chögyam Trungpa, and lives in Boulder, Colorado. His book, The Awakened One, is a biography of the Buddha. This extract describes the key moment of Buddha’s liberation when he ‘saw through the very last trace of ignorance in himself’ at the first light of dawn.

At the end of the third watch, at the first light of dawn the bodhisattva saw through the very last trace of ignorance in himself. Thus he attained complete and utter enlightenment and became the Buddha. The first words that came to him were these:

Seeking but not finding the House Builder,
I traveled through the round of countless births:
O painful is birth ever and again.
House Builder, you have now been seen;
You shall not build the house again.
Your rafters have been broken down;
Your ridge pole is demolished too.
My mind has now attained the unformed nirvana
And reached the end of every kind of craving.

Then he thought: “I have attained the unborn. My liberation is unassailable. This is my last birth. There will now be no renewal of becoming.”

From: The Awakened One