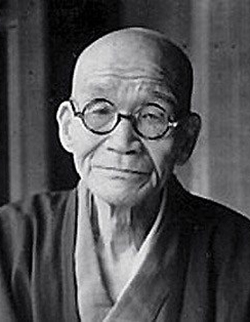 Kodo Sawaki’s reluctance to ever fully associate himself with a temple or a Zen institution earned him the nickname, ‘The Homeless Kodo’. He was considered one of the most important figures of Japanese Zen in the 20th century for his direct approach to teaching across all social levels. The book, Teachings of the Homeless Kodo, was compiled many years after his death by Shohaku Okumura, a dharma heir of Kodo Sawaki’s student Kosho Uchiyama. The book features short quotes by Kodo Sawaki followed by commentaries by Uchiyama and Okumura. This particular chapter refers to Master Longya’s koan about a thief slipping into an empty house and the meaning of the nothingness found therein. It’s a way of looking at emptiness, Okumura writes, that “is not a negation of life; it’s simply stilling ourselves in the here and now without chasing satisfaction.”

Once a monk asked Master Longya, “How did the ancient master finally cease doing things and completely settle down?”

Longya replied, “It was like a thief slipping into a vacant house.”

A burglar breaks into an empty house. He can’t steal anything. There’s no need to escape. Nobody chases him. It’s nothing. Understand: It’s nothing.

Satori is like a burglar breaking into an empty house. Although he had difficulty getting in, there’s nothing to steal. He doesn’t need to run. Nobody’s after him. The whole thing is a flop.

Discussing Buddhist teachings is totally different from ordinary discussion, which is based on common sense. We must listen carefully to a teacher and read texts with a calm mind; I recommend not trying to understand them on your own.

This “burglar breaking into an empty house” is Sawaki Roshi’s translation of Longya’s saying,

“It was like a crook slipping into a vacant house.” This is the answer to the question, “How do we finally settle down?” or “Where’s the true refuge in our lives?” After all his efforts, the thief gets into a vacant house. There’s nothing to steal, nobody to flee from. There’s nothing but the self that is only the self in the empty house. At this point, there’s nothing to give or take, and there’s no relation to others. We might feel such a life is not worth living. But satori, the final place to settle down in one’s life, is to take this basic attitude: “That which lives out my life is nothing other than myself.” Satori is simply settling down here and now, where things are unsatisfactory.

Longya Judun (835—923), known in Japanese as Ryuge Koton, was a disciple of Dongshan Liangjie (807—69). Known in Japanese as Tozan Ryokai, Dongshan was the founder of the Caodong school, the Chinese school that Dogen Zenji studied before he founded the Soto school in Japan. The ancient master in the monk’s question refers to Shishuang Qingzhu (807— 88), or Sekiso Keisho in Japanese. Shishuang was Dongshan’s Dharma cousin.

The koan continues. After Shishuang’s death, his attendant asked the head monk the meaning of this saying. The monk replied, “It clarifies the matter of absolute oneness.” The attendant didn’t agree. Then the head monk died in zazen. The attendant patted his back and said, “You don’t understand the late teacher’s meaning even in a dream.”

Later a monk asked Longya about the meaning of Shishuang’s “cease doing.” Longya said, “It’s like a crook slipping into a vacant house.” This saying shows Longya’s understanding is very different from the head monk’s. He understands ceasing as relinquishing the struggle for gain based on our desires and settling down here and now. For the head monk, ceasing is equivalent to death. This is a common misunderstanding of the Buddhist teaching of emptiness.

But as Sawaki Roshi and Uchiyama Roshi have said, our zazen is not a negation of life; it’s simply stilling ourselves in the here and now without chasing satisfaction. According to Uchiyama Roshi, this is the attitude of living out our lives by ourselves, without relying on others or any particular dogma.

The Japanese haiku poet Masaoka Shiki (1867-1902) died of tuberculosis at thirty-five. In his final days he suffered unbearable pain caused by spinal decay. He couldn’t even shift in his bed. About three months before his death, he wrote in an essay for a newspaper: “Until now, I have misunderstood satori in Zen. I mistakenly thought that satori was to die with peace of mind in any condition. Satori is to live with peace of mind in any condition.”

From: The Zen Teaching of Homeless Kodo