“We do not simply live in this universe. The universe lives within us.” 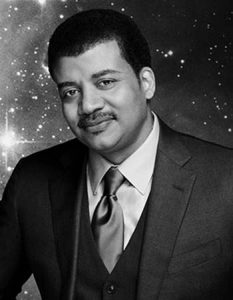 Neil deGrasse Tyson’s bestseller, Astrophysics for People in a Hurry is a user-friendly summary of the current state of scientific knowledge and research, as regards the cosmos. At the end of the book, he includes a reflective chapter titled The Cosmic Perspective, in which he synthesizes all the vast amounts of data with something personal and meaningful, contemplating the astounding state of humans in the universe. We marvel at our intelligence, he writes, but what we often miss is the miracle of our own interconnectedness with everything else, contained in the water we drink, the air that we breathe, and every molecule that makes up just one human body.

Back in January 2000, the newly rebuilt Hayden Planetarium in New York City featured a space show titled Passport to the Universe, which took visitors on a virtual zoom from the planetarium out to the edge of the cosmos. En route, the audience viewed Earth, then the solar system, then watched the hundred billion stars of the Milky Way galaxy shrink, in turn, to barely visible dots on the planetarium’s dome.

Within a month of opening day, I received a letter from an Ivy League professor of psychology whose expertise was in things that make people feel insignificant. I never knew one could specialize in such a field. He wanted to administer a before-and-after questionnaire to visitors, assessing the depth of their depression after viewing the show. Passport to the Universe, he wrote, elicited the most dramatic feelings of smallness and insignificance he had ever experienced.

How could that be? Every time I see the space show (and others we’ve produced), I feel alive and spirited and connected. I also feel large, knowing that the goings-on within the three-pound human brain are what enabled us to figure out our place in the universe.

Powerful forces in society leave most of us susceptible

Allow me to suggest that it’s the professor, not I, who has misread nature. His ego was unjustifiably big to begin with, inflated by delusions of significance and fed by cultural assumptions that human beings are more important than everything else in the universe.

In all fairness to the fellow, powerful forces in society leave most of us susceptible. As was I, until the day I learned in biology class that more bacteria live and work in one centimeter of my colon than the number of people who have ever existed in the world. That kind of information makes you think twice about who—or what—is actually in charge.

From that day on, I began to think of people not as the masters of space and time but as participants in a great cosmic chain of being, with a direct genetic link across species both living and extinct, extending back nearly four billion years to the earliest single-celled organisms on Earth.

I know what you’re thinking: we’re smarter than bacteria.

No doubt about it, we’re smarter than every other living creature that ever ran, crawled, or slithered on Earth. But how smart is that? We cook our food. We compose poetry and music. We do art and science. We’re good at math. Even if you’re bad at math, you’re probably much better at it than the smartest chimpanzee, whose genetic identity varies in only trifling ways from ours. Try as they might, primatologists will never get a chimpanzee to do long division, or trigonometry.

Imagine a life-form whose brainpower is to ours as ours is to a chimpanzee’s. To such a species, our highest mental achievements would be trivial. Their toddlers, instead of learning their ABCs on Sesame Street, would learn multivariable calculus on Boolean Boulevard. Our most complex theorems, our deepest philosophies, the cherished works of our most creative artists, would be projects their school kids bring home for Mom and Dad to display on the refrigerator door with a magnet. These creatures would study Stephen Hawking (who occupies the same endowed professorship once held by Isaac Newton at the University of Cambridge) because he’s slightly more clever than other humans. Why? He can do theoretical astrophysics and other rudimentary calculations in his head, like their little Timmy who just came home from alien preschool.

We might be entitled to walk around thinking we’re distant and distinct from our fellow creatures. But no such gap exists.

If a huge genetic gap separated us from our closest relative in the animal kingdom, we could justifiably celebrate our brilliance. We might be entitled to walk around thinking we’re distant and distinct from our fellow creatures. But no such gap exists. Instead, we are one with the rest of nature, fitting neither above nor below, but within.

Take water. It’s common, and vital. There are more molecules of water in an eight-ounce cup of the stuff than there are cups of water in all the world’s oceans. Every cup that passes through a single person and eventually rejoins the world’s water supply holds enough molecules to mix 1,500 of them into every other cup of water in the world. No way around it: some of the water you just drank passed through the kidneys of Socrates, Genghis Khan, and Joan of Arc.

How about air? Also vital. A single breathful draws in more air molecules than there are breathfuls of air in Earth’s entire atmosphere. That means some of the air you just breathed passed through the lungs of Napoleon, Beethoven, Lincoln, and Billy the Kid.

A single breathful draws in more air molecules than there are breathfuls of air in Earth’s entire atmosphere.

Time to get cosmic. There are more stars in the universe than grains of sand on any beach, more stars than seconds have passed since Earth formed, more stars than words and sounds ever uttered by all the humans who ever lived.

Want a sweeping view of the past? Our unfolding cosmic perspective takes you there. Light takes time to reach Earth’s observatories from the depths of space, and so you see objects and phenomena not as they are but as they once were, back almost to the beginning of time itself. Within that horizon of reckoning, cosmic evolution unfolds continuously, in full view.

Want to know what we’re made of? Again, the cosmic perspective offers a bigger answer than you might expect. The chemical elements of the universe are forged in the fires of high-mass stars that end their lives in titanic explosions, enriching their host galaxies with the chemical arsenal of life as we know it. The result? The four most common, chemically active elements in the universe—hydrogen, oxygen, carbon, and nitrogen—are the four most common elements of life on Earth, with carbon serving as the foundation of biochemistry.

We do not simply live in this universe. The universe lives within us.

From: Astrophysics for People in a Hurry

1 thought on “Neil deGrasse Tyson and the Cosmic Perspective”