“It seems to me that science not only purifies the religious impulse of the dross of its anthropomorphism but also contributes to a religious spiritualization of our understanding of life.” 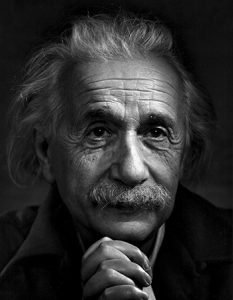 This is the third and final installment of Albert Einstein’s essay on science and religion, (read Part 1 and Part 2) in which he calls upon religious leaders to allow reason in to the phenomenology of their faith, and not to allow dogmatic superstition to supersede what is tried and tested. He writes that for some scientists, the pursuit and gradual recognition of a unifying principle is in itself a spiritual endeavor encompassing what he refers to as religion ‘in the highest sense of the word’.

The main source of the present-day conflicts between the spheres of religion and of science lies in this concept of a personal God. It is the aim of science to establish general rules which determine the reciprocal connection of objects and events in time and space. For these rules, or laws of nature, absolutely general validity is required—not proven. It is mainly a program, and faith in the possibility of its accomplishment in principle is only founded on partial successes. But hardly anyone could be found who would deny these partial successes and ascribe them to human self-deception.

“The main source of the present-day conflicts between the spheres of religion and of science lies in this concept of a personal God.”

The fact that on the basis of such laws we are able to predict the temporal behavior of phenomena in certain domains with great precision and certainty is deeply embedded in the consciousness of the modern man, even though he may have grasped very little of the contents of those laws. He need only consider that planetary courses within the solar system may be calculated in advance with great exactitude on the basis of a limited number of simple laws. In a similar way, though not with the same precision, it is possible to calculate in advance the mode of operation of an electric motor, a transmission system, or of a wireless apparatus, even when dealing with a novel development.

To be sure, when the number of factors coming into play in a phenomenological complex is too large scientific method in most cases fails us. One need only think of the weather, in which case prediction even for a few days ahead is impossible. Nevertheless no one doubts that we are confronted with a causal connection whose causal components are in the main known to us. Occurrences in this domain are beyond the reach of exact prediction because of the variety of factors in operation, not because of any lack of order in nature.

We have penetrated far less deeply into the regularities obtaining within the realm of living things, but deeply enough nevertheless to sense at least the rule of fixed necessity. One need only think of the systematic order in heredity, and in the effect of poisons, as for instance alcohol, on the behavior of organic beings. What is still lacking here is a grasp of connections of profound generality, but not a knowledge of order in itself.

The more a man is imbued with the ordered regularity of all events the firmer becomes his conviction that there is no room left by the side of this ordered regularity for causes of a different nature. For him neither the rule of human nor the rule of divine will exists as an independent cause of natural events. To be sure, the doctrine of a personal God interfering with natural events could never be refuted, in the real sense, by science, for this doctrine can always take refuge in those domains in which scientific knowledge has not yet been able to set foot.

But I am persuaded that such behavior on the part of the representatives of religion would not only be unworthy but also fatal. For a doctrine which is able to maintain itself not in clear light but only in the dark, will of necessity lose its effect on mankind, with incalculable harm to human progress. In their struggle for the ethical good, teachers of religion must have the stature to give up the doctrine of a personal God, that is, give up that source of fear and hope which in the past placed such vast power in the hands of priests. In their labors they will have to avail themselves of those forces which are capable of cultivating the Good, the True, and the Beautiful in humanity itself. This is, to be sure, a more difficult but an incomparably more worthy task. After religious teachers accomplish the refining process indicated they will surely recognize with joy that true religion has been ennobled and made more profound by scientific knowledge.

“True religion has been ennobled and made more profound by scientific knowledge.”

If it is one of the goals of religion to liberate mankind as far as possible from the bondage of egocentric cravings, desires, and fears, scientific reasoning can aid religion in yet another sense. Although it is true that it is the goal of science to discover rules which permit the association and foretelling of facts, this is not its only aim. It also seeks to reduce the connections discovered to the smallest possible number of mutually independent conceptual elements. It is in this striving after the rational unification of the manifold that it encounters its greatest successes, even though it is precisely this attempt which causes it to run the greatest risk of falling a prey to illusions.

But whoever has undergone the intense experience of successful advances made in this domain, is moved by profound reverence for the rationality made manifest in existence. By way of the understanding he achieves a far-reaching emancipation from the shackles of personal hopes and desires, and thereby attains that humble attitude of mind towards the grandeur of reason incarnate in existence, and which, in its profoundest depths, is inaccessible to man. This attitude, however, appears to me to be religious, in the highest sense of the word. And so it seems to me that science not only purifies the religious impulse of the dross of its anthropomorphism but also contributes to a religious spiritualization of our understanding of life.

The further the spiritual evolution of mankind advances, the more certain it seems to me that the path to genuine religiosity does not lie through the fear of life, and the fear of death, and blind faith, but through striving after rational knowledge. In this sense I believe that the priest must become a teacher if he wishes to do justice to his lofty educational mission.