“Whatever way you are feeling now, whether you like it or not, whether it is inspired or depressed, right or wrong, sane or crazy, it is what it is in this moment.” 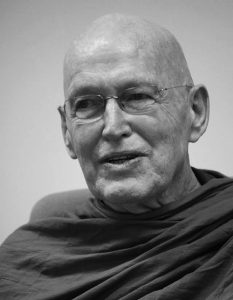 Ajahn Sumedho was a student of Ajahn Chah and one of the most prolific figures in the introduction of the Thai Forest School tradition of Theravada Buddhism to the west. In his book, The Sound of Silence, he talks about the subtlety and silence that underlies all life being something that humans can awaken to and experience directly. In this passage, taken from a chapter called Refuge in Awareness, he emphasizes the importance of starting with here and now. ‘This is the way it is’ is not a proliferating thought, he argues, but a reflective one. It’s a thought we can employ to tune into the present without birthing a chain of follow-on thoughts and, like in Master Dongshan’s poem, merging with suchness as it is.

One of the reflections I found helpful for myself is to start where you are, here and now. To be able to recognize the way you are feeling or the state of mind you are in or your body in the present, rather than operating from “Ajahn Sumedho said to listen to the sound of silence and I don’t hear anything—what did he mean by the sound of silence?” That is another thought. The main point is not the sound of silence or anything else but realizing the way it is now. So whatever mental state you are in, like wondering what Ajahn Sumedho is talking about—if you are aware that you are thinking that, that is awareness.

Listen to yourself and notice this relationship of sati (mindfulness) to the thought process or the emotional reactions you are experiencing, and then use this expression “they are what they are” or “it is what it is” as a way of looking, not judging. So it is what it is, the suchness. I remember reading about Zen Buddhism where they talk about suchness. I thought, “What is suchness?” because it didn’t mean all that much to me at the time. In Pāli they have the word tathā. The Buddha referred to himself as the tathāgatha, which means suchness, that which is now, rather than “I’m Gotama, the Buddha, born to Queen Māyā and King Suddhodana in Lumbini, and when I was born I took seven steps on seven lotuses.” So after his enlightenment there was no Buddha, no Gotama, nothing, nobody, but that which is now, the suchness of that which is present now. So this word tathatā has the sense of as-is-ness, suchness.

“It’s not analyzing, criticizing, figuring out, defining, or anything else, but it is using language to help us to look at something, remind us, because whatever you are experiencing now is what it is, it’s an honest statement.”

In Thai “suchness” is pen yang nun eng. Ajahn Buddhadāsa—at Suan Mokkh monastery in the south of Thailand—was great. I asked him once what would he want with him if he were isolated on a desert island, and he said just a little note saying pen yang nun eng: “this is the way it is,” tathā. Because this is a reflective thought; it’s not a proliferating thought, is it? It’s not analyzing, criticizing, figuring out, defining, or anything else, but it is using language to help us to look at something, remind us, because whatever you are experiencing now is what it is, it’s an honest statement. People have said, “You know, I experience memories from a previous life,” or some kind of unusual psychic experiences, and they want to know what does this really mean, what is the significance of all this—and it is what it is. No matter if it’s psychic or coming from another galaxy, or a memory of yesterday or whatever, a mood or a feeling, what we are doing is recognizing it, we are receiving it, and it’s the way it is: tathā.

This is not a way of pushing anything away, but of receiving it. Because if we have extraordinary experiences then we want to make them into “really fantastic things that are happening to me,” and then we get carried away with being interested or fascinated or even frightened by unusual mental experiences. If it is just the same old boring, repetitive thoughts or memories or negative states, it is what it is. So we have this way of reflecting, using this statement “it is what it is”; tathā is a word that points to, reminds us, that we are not trying to make anything out of it, dismiss it, deny it, exaggerate it, or proliferate on it. Whatever way you are feeling now, whether you like it or not, whether it is inspired or depressed, right or wrong, sane or crazy, it is what it is in this moment. Now that’s an honest statement. You can’t beat that.

From: The Sound of Silence