Skip to content
May 10, 2020May 20, 2020 Vanessa Able
Holly Kelso’s Suspended takes place in the space of a pause, walks during a period of isolation near the poet’s home at the base of a mountain, and at the edge of both a desert and a lake. The poem takes up the metaphors provided by nature– ants, vultures on the desert thermals- as well as borrowing from the discussions about life and death with her children.
Suspended
Even the ants have slowed their industry today,
their long black bodies carrying their equivalent
in weight and worry, they move so slowly
across the smile in the desert floor where they’ve emerged
I stop to see that they’re still living, this colony.
We’ve walked down toward the lake every day
of the quarantine, each time a little further.
Today my son is talking about a conversation
with a friend, an intern in Chicago, the way
they’d debated the worst ways to die,
these two healthy young men, working in physics,
each understanding our proximity to death
as an algorithm: distance traveled divided by time.
This intern is from a village in Africa
and had a neighbor once who fell asleep
against a tree with his machete out of reach,
he awoke to being swallowed by a python.
This was the worst we could think of,
my son says, of death.
We are entering the fifth mile through the desert,
we see a kettle of vultures, their vermilion heads and wattles
a contrast against their dark bodies and the sunless sky
as they float on the thermals of this morning,
as though they are suspended, in time, as though
they don’t know infinitely more than us about dying. 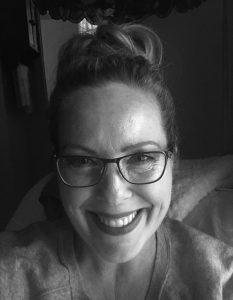 Holly Kelso is a career educator who has spent 24 years teaching literacy to children and adults. Her writing appears in a variety of online literary journals. She lives in Boulder City, Nevada, where she teaches reading to middle school students.