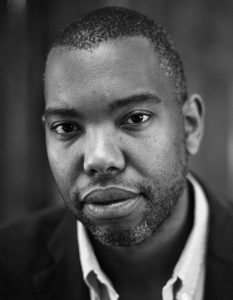 “You have been cast into a race in which the wind is always at your face and the hounds are always at your heels. And to varying degrees this is true of all life. The difference is that you do not have the privilege of living in ignorance of this essential fact.”

Between the World and Me is author and journalist Ta-Nehisi Coates’ letter to his teenage son about the feelings and reality associated with being black in the United States. His book draws on his own experiences growing up in West Baltimore in the 1980s and describes the fear that was soaked into his everyday life. In this excerpt from an article published in The Atlantic prior to the release of his book, Coates talks about the gap he felt between his own world and the world he saw through the TV set, as well as the perplexity and disingenuity of being fed a stream of non-violent role models at school. The essay in the magazine finishes with this stirring paragraph:

‘I am sorry that I cannot make it okay. I am sorry that I cannot save you—but not that sorry. Part of me thinks that your very vulnerability brings you closer to the meaning of life, just as for others, the quest to believe oneself white divides them from it. The fact is that despite their dreams, their lives are also not inviolable. When their own vulnerability becomes real—when the police decide that tactics intended for the ghetto should enjoy wider usage, when their armed society shoots down their children, when nature sends hurricanes against their cities—they are shocked by the rages of logic and the natural world in a way that those of us who were born and bred to understand cause and effect can never be. And I would not have you live like them. You have been cast into a race in which the wind is always at your face and the hounds are always at your heels. And to varying degrees this is true of all life. The difference is that you do not have the privilege of living in ignorance of this essential fact.’

I remember being amazed that death could so easily rise up from the nothing of a boyish afternoon, billow up like fog. I knew that West Baltimore, where I lived; that the north side of Philadelphia, where my cousins lived; that the South Side of Chicago, where friends of my father lived, comprised a world apart. Somewhere out there beyond the firmament, past the asteroid belt, there were other worlds where children did not regularly fear for their bodies. I knew this because there was a large television in my living room. In the evenings I would sit before this television bearing witness to the dispatches from this other world. There were little white boys with complete collections of football cards, their only want was a popular girlfriend and their only worry was poison oak. That other world was suburban and endless, organized around pot roasts, blueberry pies, fireworks, ice-cream sundaes, immaculate bathrooms, and small toy trucks that were loosed in wooded backyards with streams and endless lawns. Comparing these dispatches with the facts of my native world, I came to understand that my country was a galaxy, and this galaxy stretched from the pandemonium of West Baltimore to the happy hunting grounds of Mr. Belvedere. I obsessed over the distance between that other sector of space and my own. I knew that my portion of the American galaxy, where bodies were enslaved by a tenacious gravity, was black and that the other, liberated portion was not. I knew that some inscrutable energy preserved the breach. I felt, but did not yet understand, the relation between that other world and me. And I felt in this a cosmic injustice, a profound cruelty, which infused an abiding, irrepressible desire to unshackle my body and achieve the velocity of escape.

‘The meek shall inherit the earth’ meant nothing to me. The meek were battered in West Baltimore, stomped out at Walbrook Junction, bashed up on Park Heights, and raped in the showers of the city jail.

Before I could escape, I had to survive, and this could only mean a clash with the streets, by which I mean not just physical blocks, nor simply the people packed into them, but the array of lethal puzzles and strange perils that seem to rise up from the asphalt itself. The streets transform every ordinary day into a series of trick questions, and every incorrect answer risks a beat-down, a shooting, or a pregnancy. No one survives unscathed. When I was your age, fully one-third of my brain was concerned with whom I was walking to school with, our precise number, the manner of our walk, the number of times I smiled, whom or what I smiled at, who offered a pound and who did not—all of which is to say that I practiced the culture of the streets, a culture concerned chiefly with securing the body.

The culture of the streets was essential—there was no alternative. I could not retreat into the church and its mysteries. My parents rejected all dogmas. We spurned the holidays marketed by the people who wanted to be white. We would not stand for their anthems. We would not kneel before their God. “The meek shall inherit the earth” meant nothing to me. The meek were battered in West Baltimore, stomped out at Walbrook Junction, bashed up on Park Heights, and raped in the showers of the city jail. My understanding of the universe was physical, and its moral arc bent toward chaos then concluded in a box. That was the message of the small-eyed boy, untucking the piece—a child bearing the power to body and banish other children to memory. Fear ruled everything around me, and I knew, as all black people do, that this fear was connected to the world out there, to the unworried boys, to pie and pot roast, to the white fences and green lawns nightly beamed into our television sets.

How could the schools valorize men and women whose values society actively scorned? How could they send us out into the streets of Baltimore, knowing all that they were, and then speak of nonviolence?

Every February my classmates and I were herded into assemblies for a ritual review of the civil-rights movement. Our teachers urged us toward the example of freedom marchers, Freedom Riders, and Freedom Summers, and it seemed that the month could not pass without a series of films dedicated to the glories of being beaten on camera. Why are they showing this to us? Why were only our heroes nonviolent? Back then all I could do was measure these freedom-lovers by what I knew. Which is to say, I measured them against children pulling out in the 7-Eleven parking lot, against parents wielding extension cords, and the threatening intonations of armed black gangs saying, “Yeah, nigger, what’s up now?” I judged them against the country I knew, which had acquired the land through murder and tamed it under slavery, against the country whose armies fanned out across the world to extend their dominion. The world, the real one, was civilization secured and ruled by savage means. How could the schools valorize men and women whose values society actively scorned? How could they send us out into the streets of Baltimore, knowing all that they were, and then speak of nonviolence?

Some things were clear to me: The violence that undergirded the country, so flagrantly on display during Black History Month, and the intimate violence of the streets were not unrelated. And this violence was not magical, but was of a piece and by design. But what exactly was the design? And why? I must know. I must get out … but into what? I saw the design in those in the boys on the corner, in “the babies having babies.” The design explained everything, from our cracked-out fathers to HIV to the bleached skin of Michael Jackson. I felt this but I could not explain it. This was two years before the Million Man March. Almost every day I played Ice Cube’s album Death Certificate: “Let me live my life, if we can no longer live our life, then let us give our life for the liberation and salvation of the black nation.” I was haunted by the bodily sacrifice of Malcolm. I was haunted because I believed that we had left ourselves back there, and now in the crack era all we had was a great fear. Perhaps I must go back. That was what I heard in the rapper’s call to “keep it real.” Perhaps we should return to ourselves, to our own primordial streets, to our own ruggedness, to our own rude hair. Perhaps we should return to Mecca.

Adapted from: Between the World and Me

3 thoughts on “The Inscrutable Energy that Preserves the Breach”