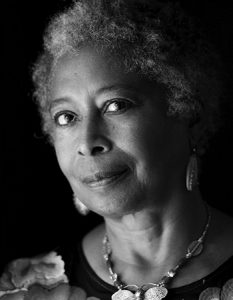 In this essay about anger and injustice, writer and social activist Alice Walker begins by presenting a curse prayer found by Zora Neale Hurston that is more than a century old. The prayer, she suggests, is the voice of a woman of color, an ‘aboriginal’ inhabitant of a land expropriated and occupied by whites. As Walker says, it is a ‘marvel’ of precise anger and absolute bitterness that Walker allows to flow through her own writing here, in her affinity to the anonymous hand that composed the curse. The curse, she argues, is finally playing out; in 1982, when Walker wrote this essay, the issue was around the dangers of nuclear power. Today, there are a different set of concerns, but Alice Walker’s words continue to resonate.

TO THE MAN GOD: O Great One, I have been sorely tried by my enemies and have been blasphemed and lied against. My good thoughts and my honest actions have been turned to bad actions and dishonest ideas. My home has been disrespected, my children have been cursed and ill-treated. My dear ones have been backbitten and their virtue questioned. O Man God, I beg that this that I ask for my enemies shall come to pass:

This is a curse-prayer that Zora Neale Hurston collected in the 1920s. And by then it was already old. I have often marveled at it. At the precision of its anger, the absoluteness of its bitterness. Its utter hatred of the enemies it condemns. It is a curse-prayer by a person who would readily, almost happily, commit suicide, if it meant her enemies would also die. Horribly.

I am sure it was a woman who first prayed this curse. And I see her-black, yellow, brown or red, “aboriginal” as the Ancients are called in South Africa and Australia and other lands invaded, expropriated, and occupied by whites. And I think, with astonishment, that the curse-prayer of this colored woman—starved, enslaved, humiliated, and carelessly trampled to death—over centuries, is coming to pass. Indeed, like ancient peoples of color the world over, who have tried to tell the white man of the destruction that would inevitably follow from the uranium-mining plunder of their sacred lands, this woman—along with millions and billions of obliterated sisters, brothers, and children—seems to have put such enormous energy into her hope for revenge that her curse seems close to bringing it about. And it is this hope for revenge, finally, I think, that is at the heart of many People of Color’s resistance to the present antinuclear movement.

In any case, this has been my own problem.

When I have considered the enormity of the white man’s crimes against humanity. Against women. Against every living person of color. Against the poor. Against my mother and my father. Against me … When I consider that at this very moment he wishes to take away what little freedom I have died to achieve, through denial of my right to vote . . Has already taken away education, medicine, housing, and food .. That William Shockley is saying at this moment that he will run for the Senate of my country to push his theory that blacks are genetically inferior and should be sterilized … When I consider that he is, they are, a real and present threat to my life and the life of my daughter, my people, I think—in perfect harmony with my sister of long ago: Let the earth marinate in poisons. Let the bombs cover the ground like rain. For nothing short of total destruction will ever teach them anything.

And it would be good, perhaps, to put an end to the species in any case, rather than let white men continue to subjugate it, and continue their lust to dominate, exploit, and despoil not just our planet, but the rest of the universe, which is their clear and oft-stated intention; leaving their arrogance and litter not just on the moon, but on everything else they can reach.

“What they have done to the Old, they will do to the New. Under the white man every star would become a South Africa, every planet a Vietnam.”

If we have any true love for the stars, planets, the rest of Creation, we must do everything we can to keep white men away from them. They who have appointed themselves our representatives to the rest of the universe. They who have never met any new creature without exploiting, abusing, or destroying it. They who say we poor (white included) and colored and female and elderly blight neighborhoods, while they blight worlds.

What they have done to the Old, they will do to the New. Under the white man every star would become a South Africa, every planet a Vietnam.

Fatally irradiating ourselves may in fact be the only way to save others from what Earth has already become. And this is a consideration that I believe requires serious thought from every one of us.

“If by some miracle, the Earth is spared, only justice to every living thing will save humankind.”

However, just as the sun shines on the godly and the ungodly alike, so does nuclear radiation. And with this knowledge it becomes increasingly difficult to embrace the thought of extinction purely for the assumed satisfaction of—from the grave—achieving revenge. Or even of accepting our demise as a planet as a simple and just preventive medicine administered to the universe. Life is better than death, I believe, if only because it is less boring, and because it has fresh peaches in it. In any case, Earth is my home—though for centuries white people have tried to convince me I have no right to exist, except in the dirtiest, darkest corners of the globe.

So let me tell you: I intend to protect my home. Praying—not a curse—only the hope that my courage will not fail my love. But if by some miracle, and all our struggle, the Earth is spared, only justice to every living thing (and everything is alive) will save humankind.

And we are not saved yet.
Only justice can stop a curse.

Alice Walker
From: In Search of Our Mothers’ Gardens

1 thought on “Only Justice Can Stop a Curse”