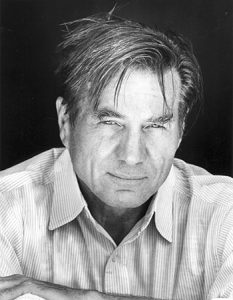 though sometimes it is necessary
to reteach a thing its loveliness,
to put a hand on its brow
of the flower
and retell it in words and in touch
it is lovely

In a 2001 interview with The Christian Science Monitor, poet Galway Kinnell talked about seeing beyond the usual clichés of things: “‘Pig’ is a pejorative word, but if you get to know them, get a feeling for them, you see that they have an extraordinary beauty. When creatures don’t have an extraordinary beauty, it’s because the person in contact with them is not seeing it. I feel more and more in love with other creatures as I get older.” Kinnell, who was for many years a civil rights activist and whose work reflected a deep engagement with the the truth of experience, never liked the term ‘spiritual’ that was often used to describe his poetry; rather, he said he preferred to address his work ‘to being.’ Kinnell counted Walt Whitman, Theodore Roethke and Ranier Maria Rilke among his influences.

Saint Francis and the Sow

The bud
stands for all things,
even for those things that don’t flower,
for everything flowers, from within, of self-blessing;
though sometimes it is necessary
to reteach a thing its loveliness,
to put a hand on its brow
of the flower
and retell it in words and in touch
it is lovely
until it flowers again from within, of self-blessing;
as Saint Francis
put his hand on the creased forehead
of the sow, and told her in words and in touch
blessings of earth on the sow, and the sow
began remembering all down her thick length,
from the earthen snout all the way
through the fodder and slops to the spiritual curl of the tail,
from the hard spininess spiked out from the spine
down through the great broken heart
to the sheer blue milken dreaminess spurting and shuddering
from the fourteen teats into the fourteen mouths sucking and blowing beneath them:
the long, perfect loveliness of sow.