“When I sitting heard the astronomer where he lectured with much applause in the lecture-room,
How soon unaccountable I became tired and sick” 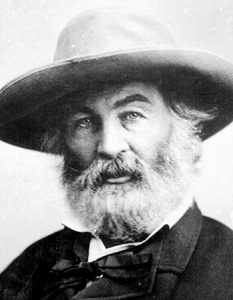 ‘The known universe has one complete lover and that is the greatest poet,’ wrote Walt Whitman in the foreword to his book Leaves of Grass. The classic short verse below is exemplary of the poet’s relationship with the natural world and of his dispassion for a dissecting academic approach to the things that inspired a sense of magical wonder in him. After laboring under a tiresome litany of proofs, figures, columns, charts and diagrams, he wanders off, ‘rising and gliding’ into the ‘mystical moist night air’ to contemplate the stars in his own quiet way, alone. The key to understanding his experience is the phrase ‘perfect silence‘; the absence of all words in the experience that followed the astronomer’s lecture. Which is not to say that he condemned the astronomer: in another extract from the foreword to Leaves of Grass, he includes astronomers in a list of professions who ‘are not poets, but they are the lawgivers of poets and their construction underlies the structure of every perfect poem.’

When I Heard the Learn’d Astronomer

When I heard the learn’d astronomer,
When the proofs, the figures, were ranged in columns before me,
When I was shown the charts and diagrams, to add, divide, and measure them,
When I sitting heard the astronomer where he lectured with much applause in the lecture-room,
How soon unaccountable I became tired and sick,
Till rising and gliding out I wander’d off by myself,
In the mystical moist night-air, and from time to time,
Look’d up in perfect silence at the stars.