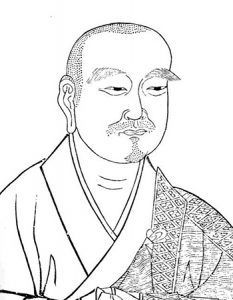 “When wonder exists in serenity, all achievement is forgotten in illumination. What is this wonder? Alertly seeing through confusion is the way of silent illumination and the origin of subtle radiance.”

Hongzhi Zhengjue was a 12th century philosopher and Zen master in China who authored a large number of philosophical texts as well as the seminal collection of koans, The Book of Serenity. Zhengjue’s emphasis and central teaching theme was ‘Shikantaza‘, the form of silent meditation (‘just sitting’) that is at the heart of Soto Zen practice. This poem, Guidepost of Silent Illumination, is a suggestive guideline for silent meditation built on – among others – the legacy of Zhengjue’s predecessors Shitou and Dongshan.

Silent and serene, forgetting words, bright clarity appears before you.
When you reflect it you become vast, where you embody it you are spiritually uplifted. Spiritually solitary and shining, inner illumination restores wonder,
Dew in the moonlight, a river of stars, snow-covered pines, clouds enveloping the peaks. In darkness it is most bright, while hidden all the more manifest.
The crane dreams in the wintery mists. The autumn waters flow far in the distance. Endless kalpas are totally empty, all things are completely the same.
When wonder exists in serenity, all achievement is forgotten in illumination.
What is this wonder? Alertly seeing through confusion
Is the way of silent illumination and the origin of subtle radiance.
Vision penetrating into subtle radiance is weaving gold on a jade loom.
Upright and inclined yield to each other; light and dark are interdependent.
Not depending on sense faculty and object, at the right time they interact.
Drink the medicine of good views. Beat the poison-smeared drum.
When they interact, killing and giving life are up to you.
Through the gate the self emerges and the branches bear fruit.
Only silence is the supreme speech, only illumination the universal response.
Responding without falling into achievement, speaking without involving listeners.
The ten thousand forms majestically glisten and expound the dharma.
All objects certify it, every one in dialogue.
Dialoguing and certifying, they respond appropriately to each other;
But if illumination neglects serenity then aggresiveness appears.
Certifying and dialoguing, they respond to to each other appropriately;
But if serenity neglects illumination, murkiness leads to wasted dharma.
When silent illumination is fulfilled, the lotus blossoms, the dreamer awakens,
A hundred streams flow into the ocean, a thousand ranges face the highest peak.
Like geese preferring milk, like bees gathering nectar,
When silent illumination reaches the ultimate, I offer my teaching.
The teaching of silent illumination penetrates from the highest down to the foundation. The body being shunyata, the arms in mudra,
From beginning to end the changing appearances and then thousand differences share one pattern.
Mr. Ho offered jade [to the Emperor]; [Minister] Xiangru pointed to its flaws.
Facing changes has its principles, the great function is without striving.
The ruler stays in the kingdom, the general goes beyond the frontiers.
Our school’s affair hits the mark straight and true.
Transmit it to all directions without desiring to gain credit.

by Hongzhi Zhengjue (1091-1157)
(Translated by Taigen Dan Leighton with Yi Wu)
From: Cultivating the Empty Field

2 thoughts on “The Guidepost of Silent Illumination”