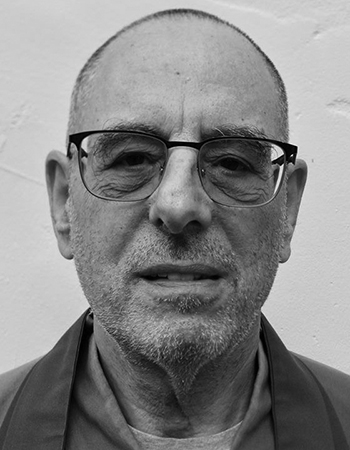 “Life is the wind. Life is the water. As long as life appears as phenomena there will be the stirrings of delusion. Delusion is in fact the movement, the stir­ring, of awakening.”

In this 2019 essay featured in his new book, When You Greet Me, I Bow, Zen teacher and poet, Norman Fischer addresses the perplexing topic of mind, and the Buddhist insight into the interplay of the relative and the absolute. Within our human condition, we can have some sense of this relationship, which Fischer pictures as the kinship of waves to the ocean: the surface of the sea, like the state of our everyday minds, is subject to upheaval and turbulence, but the immense and profound body of water that underlies it remains undisturbed. Click here for The Dewdrop’s interview with Norman Fischer.

The teachings about mind are perhaps the most pre­cious, profound, and foundational in Buddhism. Without some understanding of the expansive concept of mind described in these teachings, it’s hard to appreciate the full context of Buddhist meditation practice and the enlightenment promised as its ultimate goal.

The Awakening of Faith in the Mahayana, an important text in East Asian Buddhism, begins by saying that mind—not only mind in the abstract but the actual minds of sentient beings—“includes within itself all states of being of the phenomenal world and the transcen­dent world.”

In other words, mind isn’t just mental. It isn’t, as we understand it in the West, exclusively intellectual and psychological. Mind includes all the material world. It also includes the “transcendent world,” which sounds odd. Isn’t it commonplace to think of Bud­dhism as having, refreshingly, no idea of the transcendent, which sounds like God? We are told that Buddhism is practical and down-to-earth, a human teaching for human beings. It’s about calming and understanding the mind in order to put an end to suffering.

This is certainly true, and is a prominent theme of early Bud­dhism. But in contemplating what mind is, later Mahayana Buddhist pundits teased out huge and astounding implications embedded in the early teachings.

They began by distinguishing two aspects of mind—an absolute aspect and a relative, phenomenal aspect. These, they said, are both identical and not identical. So mind (not only in the abstract, but also my mind, your mind, the mind of all sentient beings) is at the same time both transcendent and not.

Mind can be both absolute and phenomenal because it is empty of any hard-and-fast characteristics that could distinguish one thing from another. It is fluid. It neither exists nor doesn’t exist. So, strictly speaking, it isn’t impermanent. It is eternal.

This means that the transcendence isn’t a place or state of being elsewhere or otherwise: it is here and now. Mind and matter, space and time, animate and inanimate, imaginative and real—all are mind. Mind can be both absolute and phenomenal because it is empty of any hard-and-fast characteristics that could distinguish one thing from another. It is fluid. It neither exists nor doesn’t exist. So, strictly speaking, it isn’t impermanent. It is eternal.

In effect, mind equals reality equals impermanence equals eter­nity. All of which is contained in the workings of my own mind and that of all sentient beings. So this little human life of mine, with all its petty dramas, as well as this seemingly limited and painful world, is in reality the playing-out of something ineffably larger and grander. As Vasubandhu, the Indian Yogachara (Mind Only) sage, writes in his famous Thirty Verses, reality is simply the trans­formations of mind.

This is staggering, baffling, and heady. What does it have to do with the inescapable fact that I definitely feel as if I am suffering? My mind may be empty, eternal, transcendent, and vast, but I still experience my life unhappily. What to do?

We could pose the question like this: If my mind is mind, and mind is reality, what is the relationship of my unenlightened mind, the cause of my suffering, to the enlightened mind that puts suf­fering to an end?

The teachings on mind assert that enlightenment and unenlightenment are in actuality not different. They are fundamentally suchness.

What we call suffering, and experience as suffering, isn’t actu­ally suffering. It is confusion, illusion, misperception, like seeing a snake that turns out to be merely a crooked stick. Suchness is the only thing we ever really experience. But since we mistake it for something painful and dangerous, we stand apart from it. We see ourselves as its victim, and so are pushed around by it, although in truth there is nothing that pushes, nothing that can be pushed, and no reason in the first place to feel pushed. Reality is not, as we imagine it to be, difficult and painful. It is always only just as it is: suchness.

But lest we project suchness to be something we can reach for or depend on, something other than what we are and see all the time in front of us, we are reminded that suchness isn’t anything. It is a mere word, and the limit, so to speak, of verbalization. It is a word proposed for the purpose of putting an end to words and concepts whose mesmerizing effect on us is the real source of our initial mistaken perception. Since all things are equally and funda­mentally suchness, there is literally nothing to be said. Even calling it suchness is too much!

Suchness isn’t anything. It is a mere word, and the limit, so to speak, of verbalization. It is a word proposed for the purpose of putting an end to words and concepts whose mesmerizing effect on us is the real source of our initial mistaken perception.

So my suffering, as real as it seems to me, is delusional. But it’s a powerful delusion! Its very structure is built into mind, and there­fore my personal consciousness. Since its shape and location (these words are metaphorical: mind has no shape or location) is the same as that of enlightenment, to which it is identical, and since both are empty of any grounding reality, my delusion can’t be gotten rid of. How can you get rid of something that doesn’t exist? Trying to get rid of it will only make matters worse. Besides, to get rid of my delusion is to get rid of my enlightenment, which is my only hope!

In a famous metaphor, Mahayana teachings liken the relation­ship of delusion and enlightenment to that of a wave and the ocean. The wave is delusion, full of motion and drama. It rises up, crests, breaks, dissipates, and gathers strength to drive again. With my eyes on the wave, I see it as real.

But the wave isn’t anything. There is no such entity as “wave.” There is only water, in motion or not. Wind acts on water to make what we call a wave. If the wind stops, the movement ceases and the water remains quiet. Whether there are waves or no waves, water remains always water, salty and wet. Without wind, the water is quiet and deep. But even when wind activity is strong on the sur­face, deep below water remains quiet.

Mind is like this. It is deep, pure, and silent. But when the winds of delusion blow, its surface stirs and what we call suffering results. But the waves of my suffering are nothing more or less than mind. And even as I rage, the depths below remain quiet. Life is the wind. Life is the water. As long as life appears as phenomena there will be the stirrings of delusion. Delusion is in fact the movement, the stir­ring, of awakening. My ocean mind is inherently pure and serene, always. When I know this, I can navigate the waves with grace. 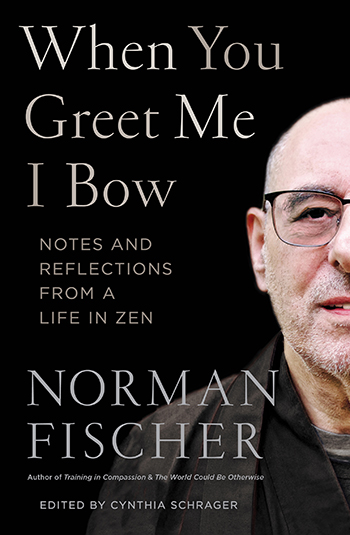 From When You Greet Me I Bow: Notes and Reflections from a Life in Zen by Norman Fischer, edited by Cynthia Schrager © 2021 by Norman Fischer. Reprinted in arrangement with Shambhala Publications, Inc. Boulder, CO. www.shambhala.com