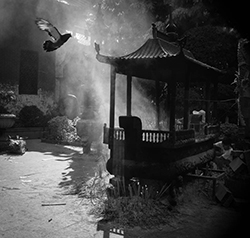 The Awakening of Faith (the Mahāyāna śraddhotpādaśāstra) is a text that summarizes the major tenets of Mahayana Buddhism and gives hands-on advice for transcending our finite lives to participate in the infinite life while living in the midst of phenomena. The origin of the text is shrouded in mystery: it has for a long time been attributed to Aśvaghoṣa, a celebrated first-century court poet northern India, but no Sanskrit version of the text has ever been found. It is thought to have been translated into Chinese sometime around the 6th or 7th centuries, and there is still some debate as to the identity of the translator. The section featured below is from one of the later chapters called ‘On Faith and Practice’ which talks about the practical methods for opening the mind beyond the trappings of everyday phenomena.

The Practice of Clear Observation

He who practices “clear observation” should observe that all conditioned phenomena in the world are unstationary and are subject to instantaneous transformation and destruction; that all activities of the mind arise and are extinguished from moment to moment; and that, therefore, all of these induce suffering. He should observe that all that had been conceived in the past was as hazy as a dream, that all that is being conceived in the present is like a flash of lightning, and that all that will be conceived in the future will be like clouds that rise up suddenly. He should also observe that the physical existences of all living beings in the world are impure and that among these various filthy things there is not a single one that can be sought after with joy.

He should reflect in the following way: all living beings, from the beginningless beginning, because they are permeated by ignorance, have allowed their mind to remain in samsara; they have already suffered all the great miseries of the body and mind, they are at present under incalculable pressure and constraint, and their sufferings in the future will likewise be limitless. These sufferings are difficult to forsake, diffcult to shake off, and yet these beings are unaware [that they are in such a state]; for this, they are greatly to be pitied.

After reflecting in this way, he should pluck up his courage and make a great vow to this effect: may my mind be free from discriminations so that I may practice all of the various meritorious acts everywhere in the ten directions; may I, to the end of the future, by applying limitless expedient means, help all suffering sentient beings so that they may obtain the bliss of nirvana, the ultimate goal,

Having made such a vow, he must, in accordance with his capacity and without faltering, practice every kind of good at all times and at all places and not be slothful in his mind. Except when he sits in concentration in the practice of “cessation,” he should at all times reflect upon what should be done and what should not be done,

From: The Awakening of Faith, Translated by Yoshito S. Hakeda

1 thought on “The Awakening of Faith”