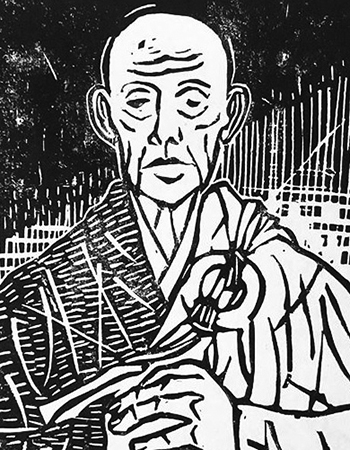 “If we explain the word ‘Buddha’ we must rinse our mouths for three days afterwards.”

Baso’s Very Mind is the 30th case or koan in the Mumonkan, The Gateless Barrier, a collection of koans compiled in the 13th century by Rinzai master Wumen Huikai (known as Mumon Ekai in Japan). The 48 koans in the collection are all sourced from well-known scenes and moments through the history of Zen that Master Wumen presented to his students during a monastic training period in the summer of 1228. The koans were subsequently transcribed alongside Wumen’s commentary and a poem of his own that he composed inspired by the subject. This particular case deals with Baso’s teaching that the very mind is the Buddha.

Daibai asked Baso, What is the Buddha?”

Baso answered, “The mind is the Buddha.”

If you fully understand Baso’s meaning, you are wearing Buddha’s clothes, eating Buddha’s food, speaking Buddha’s words, doing Buddha’s deeds, that is to say, you are Buddha himself. But Baso misled not a few people into erroring the principles of Zen. He does not realize that if we explain the word “Buddha” we must rinse our mouths for three days afterwards. If he is a man of understanding, he would cover his ears and run away hearing Baso say, “The mind is the Buddha!”

Under blue sky, in bright sunlight,

One need not search around,

Asking around what Buddha is,

is liking the stolen goods in one’s pocket and declaring oneself innocent.

Wumen Huikai (1183-1260)
From: The Gateless Gate, Translated by Eiichi Shimomissé