Reflecting on the days between a heart attack and a bypass, the scene outside the hospital on a cold and bitter March day struck Lenora Steele as the starkest of all those days. She writes that it was a day to ‘reconcile myself to the fear and draw on the faith of my Quaker grandmother.’

From the Patient Lounge, Before the Bypass

The traffic on Summer Street
is picking up. A
delivery truck idles in the
lot marked service. A city bus
opens its steel jaws and swallows
the little mob gathered
in winter’s
sooty remains. Ten stories
of curtainwall reflect
the red and white stacks
of our coal fired
generator. The lungs of the
city. The heart of industry.
Necessary and hard.
This time tomorrow the delivery
trucks will idle again,
the busses will roll, the little
mob will gather and as
the world pushes forward,
in a theatre not built
for applause, my lungs
won’t draw, my heart won’t
beat but a profusionist
with her bypass machine
will be there
watching and monitoring,
and filling in for god. 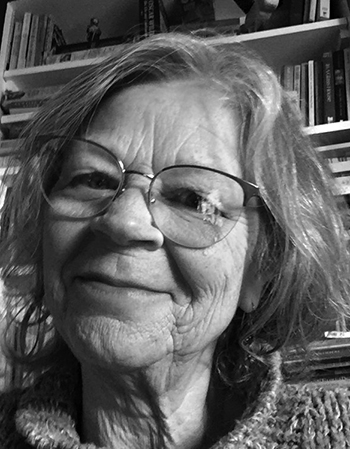 Lenora Steele
Lenora Steele’s short prose and poetry appear in the following periodicals: Event, Cranog Magazine, The Fiddlehead, Room, The Antigonish Review, Eastern Iowa Review, Wow, The New Quarterly, The Antigonish Review, Sunspot, Grain, and The Fourth River. Her work has been supported by The Canada Council for the Arts and The Nova Scotia Arts Council. She and her husband live where twice a day the tidal bore funnels a hundred billion tonnes of brine into the Bay of Fundy to the Minas Basin, up the Cobequid Bay and into the Salmon River, to her home, where the dykes hold back the sea in Truro, Nova Scotia, Canada.

2 thoughts on “Lenora Steele – From the Patient Lounge, Before the Bypass”