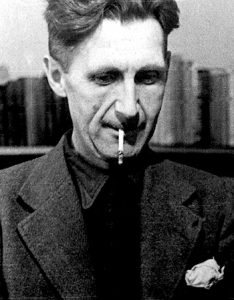 “One can write nothing readable unless one constantly struggles to efface one’s own personality. Good prose is like a window pane.”

In his 1946 essay, Why I Write, George Orwell set out what he saw as the main motivators for writing: they were, sheer egotism, esthetic enthusiasm, historical impulse and political purpose. He recounts how, under different circumstances, the fourth reason might not have been so compelling to him, but the way that his life unfolded (serving with the Imperial Police in Burma; witnessing the rise of fascism under Adolf Hitler and reporting on the Spanish Civil War), he found himself becoming more politically engaged in his writing. We should be clear, he says, about the position of our political biases, and we should acknowledge when they can no longer be omitted from the work we create, while still working towards self-effacement as an author. Read other posts about writing from Natalie Goldberg, Norman Fischer and Ray Bradbury, as well as The Dewdrop’s own Why I Write series.

The Spanish war and other events in 1936–7 turned the scale and thereafter I knew where I stood. Every line of serious work that I have written since 1936 has been written, directly or indirectly, against totalitarianism and for democratic socialism, as I understand it. It seems to me nonsense, in a period like our own, to think that one can avoid writing of such subjects. Everyone writes of them in one guise or another. It is simply a question of which side one takes and what approach one follows. And the more one is conscious of one’s political bias, the more chance one has of acting politically without sacrificing one’s esthetic and intellectual integrity.

What I have most wanted to do throughout the past ten years is to make political writing into an art. My Starting point is always a feeling of partisanship, a sense of injustice. When I sit down to write a book, I do not say to myself, “I am going to produce a work of art.” I write it because there is some lie that I want to expose, some fact to which I want to draw attention, and my initial concern is to get a hearing. But I could not do the work of writing a book, or even a long magazine article, if it were not also an esthetic experience.

“The more one is conscious of one’s political bias, the more chance one has of acting politically without sacrificing one’s esthetic and intellectual integrity.”

Anyone who cares to examine my work will see that even when it is downright propaganda it contains much that a full-time politician would consider irrelevant. I am not able, and I do not want, completely to abandon the world-view that I acquired in childhood. So long as I remain alive and well I shall continue to feel strongly about prose style, to love the surface of the earth, and to take a pleasure in solid objects and scraps of useless information. It is no use trying to suppress that side of myself. The job is to reconcile my ingrained likes and dislikes with the essentially public, non-individual activities that this age forces on all of us.

It is not easy. It raises problems of construction and of language, and it raises in a new way the problem of truthfulness. Let me give just one example of the cruder kind of difficulty that arises. My book about the Spanish civil war, Homage to Catalonia, is, of course, a frankly political book, but in the main it is written with a certain detachment and regard for form. I did try very hard in it to tell the whole truth without violating my literary instincts.

“I find that by the time you have perfected any style of writing, you have always outgrown it.”

But among other things it contains a long chapter, full of newspaper quotations and the like, defending the Trotskyists who were accused of plotting with Franco. Clearly such a chapter, which after a year or two would lose its interest for any ordinary reader, must ruin the book. A critic whom I respect read me a lecture about it. “Why did you put in all that stuff?” he said. “You’ve turned what might have been a good book into journalism.” What he said was true, but I could not have done otherwise. I happened to know, what very few people in England had been allowed to know, that innocent men were being falsely accused. If I had not been angry about that I should never have written the book.

In one form or another this problem comes up again. The problem of language is subtler and would take too long to discuss. I will only say that of late years I have tried to write less picturesquely and more exactly. In any case I find that by the time you have perfected any style of writing, you have always outgrown it. Animal Farm was the first book in which I tried, with full consciousness of what I was doing, to fuse political purpose and artistic purpose into one whole. I have not written a novel for seven years, but I hope to write another fairly soon. It is bound to be a failure, every book is a failure, but I do know with some clarity what kind of book I want to write.

“Writing a book is a horrible, exhausting struggle, like a long bout of some painful illness.”

Looking back through the last page or two, I see that I have made it appear as though my motives in writing were wholly public-spirited. I don’t want to leave that as the final impression. All writers are vain, selfish and lazy, and at the very bottom of their motives there lies a mystery. Writing a book is a horrible, exhausting struggle, like a long bout of some painful illness. One would never undertake such a thing if one were not driven on by some demon whom one can neither resist nor understand. For all one knows that demon is simply the same instinct that makes a baby squall for attention. And yet it is also true that one can write nothing readable unless one constantly struggles to efface one’s own personality. Good prose is like a window pane. I cannot say with certainty which of my motives are the strongest, but I know which of them deserve to be followed. And looking back through my work, I see that it is invariably where I lacked a political purpose that I wrote lifeless books and was betrayed into purple passages, sentences without meaning, decorative adjectives and humbug generally.