Raymond P. Hammond made his first notes for this poem on the F train in the early 90s. He worked at the Statue of Liberty at the time and would take the F train home to Brooklyn at the end of the day. He writes: “In my haze from working I would put my head against the window of the train, and, while I often found the emergence from the dark of the tunnel shocking, as my eyes would adjust and I would look forward and skyward, I always found this image to be comforting, reassuring. Over the years I have often thought of this image, and wondered why it has stayed with me so long. Somewhere along the way I realized that the image fits what I was going through during those years: an emergence from religion to a more spiritual way of being.”

the giant silver earthworm lumbers
out of its hole emerging just south
of the carroll street station and climbs
up the modern steel erector set
that is the old culver viaduct
up and up and up toward the smith
and ninth street station at its zenith,
a rollercoaster’s painful climax
as it rends the veil of god’s sunlight
its windows act like a zoetrope
casting shadows between rays of light
onto reflective silver crosses
atop dilapidated steeples
that once served to draw eyes to heaven 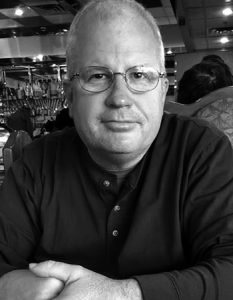 Raymond P. Hammond is the editor-in-chief of both The New York Quarterly and NYQ Books. He holds an MA in American Poetry from NYU’s Gallatin School and is the author of Poetic Amusement, a book of literary criticism. He lives in Beacon, NY with his wife, the poet Amanda J. Bradley, and their dog Hank.