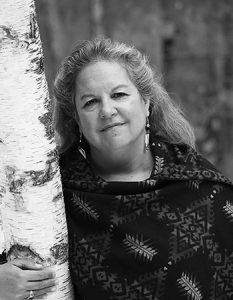 “You’d think that biologists, of all people, would have words for life. But in scientific language our terminology is used to define the boundaries of our knowing. What lies beyond our grasp remains unnamed.”

Writer, botanist and professor of plant ecology Robin Wall Kimmerer’s book Braiding Sweetgrass is a call to awakening to ecological consciousness and an awareness of our interconnectedness with nature. Drawing on her experiences as a Potawatomi woman, Kimmerer puts forward the Native American experience of deference to plants and animals, who are considered our teachers. In this extract from the beginning of her book, she talks about the term puhpowee which has no equivalent in English and which means ‘the force which causes mushrooms to push up from the earth overnight.’ She reminds us that the languages of Native peoples will soon be lost and with them their thoughts and way of seeing the world.

I come here to listen, to nestle in the curve of the roots in a soft hollow of pine needles, to lean my bones against the column of white pine, to turn off the voice in my head until I can hear the voices outside it: the shhh of wind in needles, water trickling over rock, nuthatch tapping, chipmunks digging, beechnut falling, mosquito in my ear, and something more-something that is not me, for which we have no language, the wordless being of others in which we are never alone. After the drumbeat of my mother’s heart, this was my first language.

I could spend a whole day listening. And a whole night. And in the morning, without my hearing it, there might be a mushroom that was not there the night before, creamy white, pushed up from the pine needle duff, out of darkness to light, still glistening with the fluid of its passage. Puhpowee.

Listening in wild places, we are audience to conversations in a language not our own. I think now that it was a longing to comprehend this language I hear in the woods that led me to science, to learn over the years to speak fluent botany. A tongue that should not, by the way, be mistaken for the language of plants. I did learn another language in science, though, one of careful observation, an intimate vocabulary that names each little part. To name and describe you must first see, and science polishes the gift of seeing.

“Listening in wild places, we are audience to conversations in a language not our own.”

I honor the strength of the language that has become a second tongue to me. But beneath the richness of its vocabulary and its descriptive power, something is missing, the same something that swells around you and in you when you listen to the world. Science can be a language of distance which reduces a being to its working parts, it is a language of objects. The language scientists speak, however precise, is based on a profound error in grammar, an omission, a grave loss in translation from the native languages of these shores.

My first taste of the missing language was the word Puhpowee on my tongue. I stumbled upon it in a book by the Anishinaabe ethnobotanist Keewaydinoquay, in a treatise on the traditional uses of fungi by our people. Puhpowee, she explained, translates as “the force which causes mushrooms to push up from the earth overnight.” As a biologist, I was stunned that such a word existed. In all its technical vocabulary, Western science has no such term, no words to hold this mystery. You’d think that biologists, of all people, would have words for life. But in scientific language our terminology is used to define the boundaries of our knowing. What lies beyond our grasp remains unnamed.

“Puhpowee translates as “the force which causes mushrooms to push up from the earth overnight.” As a biologist, I was stunned that such a word existed.”

In the three syllables of this new word I could see an entire process of close observation in the damp morning woods, the formulation of a theory for which English has no equivalent. The makers of this word understood a world of being, full of unseen energies that animate everything. I’ve cherished it for many years, as a talisman, and longed for the people who gave a name to the life force of mushrooms. The language that holds Puhpowee is one that I wanted to speak. So when I learned that the word for rising, for emergence, belonged to the language of my ancestors, it became a signpost for me.

Had history been different, I would likely speak Bodewadmimwin, or Potawatomi, an Anishinaabe language. But, like many of the three hundred and fifty indigenous languages of the Americas, Potawatomi is threatened, and I speak the language you read. The powers of assimilation did their work as my chance of hearing that language, and yours too, was washed from the mouths of Indian children in government boarding schools where speaking your native tongue was forbidden.

“The makers of this word understood a world of being, full of unseen energies that animate everything.”

Children like my grandfather, who was taken from his family when he was just a little boy of nine years old. This history scattered not only our words but also our people. Today I live far from our reservation, so even if I could speak the language, I would have no one to talk to. But a few summers ago, at our yearly tribal gathering, a language class was held and I slipped into the tent to listen.

There was a great deal of excitement about the class because, for the first time, every single fluent speaker in our tribe would be there as a teacher. When the speakers were called forward to the circle of folding chairs, they moved slowly-with canes, walkers, and wheelchairs, only a few entirely under their own power. I counted them as they filled the chairs. Nine. Nine fluent speakers. In the whole world. Our language, millennia in the making, sits in those nine chairs. The words that praised creation, told the old stories, lulled my ancestors to sleep, rests today in the tongues of nine very mortal men and women. Each in turn addresses the small group of would-be students.

“The words that praised creation, told the old stories, lulled my ancestors to sleep, rests today in the tongues of nine very mortal men and women.”

A man with long gray braids tells how his mother hid him away when the Indian agents came to take the children. He escaped boarding school by hiding under an overhung bank where the sound of the stream covered his crying. The others were all taken and had their mouths washed out with soap, or worse, for “talking that dirty Indian language.” Because he alone stayed home and was raised up calling the plants and animals by the name Creator gave them, he is here today, a carrier of the language. The engines of assimilation worked well. The speaker’s eyes blaze as he tells us, “We’re the end of the road. We are all that is left. If you young people do not learn, the language will die. The missionaries and the U.S. government will have their victory at last.”

A great-grandmother from the circle pushes her walker up close to the microphone. “It’s not just the words that will be lost,” she says. “The language is the heart of our culture; it holds our thoughts, our way of seeing the world. It’s too beautiful for English to explain.” Puhpowee.

“When the laughter subsided, he spoke at last in English: “What will happen to a joke when no one can hear it anymore?””

Jim Thunder, at seventy-five the youngest of the speakers, is a round brown man of serious demeanor who spoke only in Potawatomi. He began solemnly, but as he warmed to his subject his voice lifted like a breeze in the birch trees and his hands began to tell the story. He became more and more animated, rising to his feet, holding us rapt and silent although almost no one understood a single word. He paused as if reaching the climax of his story and looked out at the audience with a twinkle of expectation. One of the grandmothers behind him covered her mouth in a giggle and his stern face suddenly broke into a smile as big and sweet as a cracked watermelon. He bent over laughing and the grandmas dabbed away tears of laughter, holding their sides, while the rest of us looked on in wonderment. When the laughter subsided, he spoke at last in English: “What will happen to a joke when no one can hear it anymore? How lonely those words will be, when their power is gone. Where will they go? Off to join the stories that can never be told again.”

1 thought on “To Name and Describe, You Must First See”