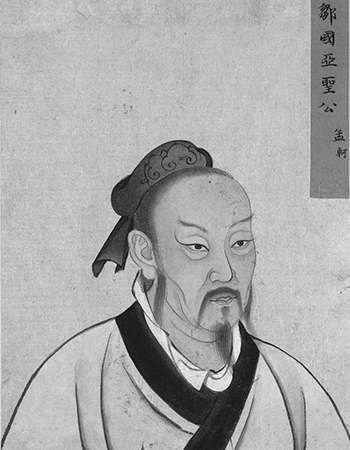 “Shame is a great thing for people. Crafty schemers have no use for shame. And if you aren’t ashamed of being inhuman, what will ever make you human?”

Menicus was a Chinese philosopher who lived in the 4th century BC who continued and deepened Confucius’ legacy. One of the fourth generation of philosophers after Confucius, Mencius spent much of his life traveling around Chine during the Warring States period, counseling various rulers and people in power. The book in his name is a record of these meetings, and has survived as a collection of snippets of wisdom for personal and community life. These writings reveal his core conviction that human nature is fundamentally good and pure, and that what needs stripping away are the impurities and ‘fetters’ that emerge through social living.

Mencius said: “What you seek you will find, and what you ignore you will lose. Where this saying is right, and to seek means to find, we’re seeking something within ourselves.
“To seek is a question of the Way, and to find is a question of destiny. Where this is right, and to seek doesn’t necessarily mean to find, we’re seeking something outside ourselves.”

Mencius said: “The ten thousand things are all there in me. And there’s no joy greater than looking within and finding myself faithful to them. Treat others as you would be treated. Devote yourself to that, for there’s no more direct approach to Humanity.”

Mencius said: “To enact it without making it clear, to enact it over and over without inquiring into it, to enact it for a lifetime without ever understanding its Way – that’s how it is for nearly everyone.”

Mencius said: “It’s impossible to be shameless. The shame of being shameless – that is shameless indeed.”

Mencius said: “Shame is a great thing for people. Crafty schemers have no use for shame. And if you aren’t ashamed of being inhuman, what will ever make you human?”

Mencius said: “In their love of virtue and benevolence, sage emperors of ancient times forgot about their exalted position. How could sage scholars of ancient times be any different? Delighting in the way, they too forgot about exalted positions. So unless emperors and dukes came in reverence and according to Ritual, they were rarely admitted to see such scholars. And if it was nearly impossible to see them, how could those rulers ever convince them to take office?”

Mencius said to Sung Kou-chien: “You love to travel, offering your counsel to leaders, so I’ll tell you something about such things: Know contentment when your counsel is valued, and contentment when it’s ignored.”
“What must a person be to know such contentment?” asked Sung Kou-chien.
“If you honor Integrity and delight in Duty you can know such contentment,” replied Mencius. “The worthy never forget Duty when destitute, and never abandon the Way when they succeed. Not forgetting Duty when destitute, the worthy realize themselves. And when they succeed without abandoning the way, the people’s faith in them never falters.
“When the ancients fulfilled their ambitions, bounty rained down on the people. When they failed, they were still worthy exemplars for all the world to see. Cultivate virtue and benevolence in yourself when destitute and alone. And when you succeed, share that virtue and benevolence with all beneath Heaven.”

Mencius said: “A commoner only feels called to great work when an Emperor Wen appears. But a great man sets to work even when there’s no sign of an Emperor Wen.”

Mencius said: “To live humble and dissatisfied with yourself, even if all the wealth of Han and Wei were added to your own – that is the mark of a person beyond compare.”

Mencius said: “Under the finest of august lords, the people seem peaceful and happy. Under a true emperor, they seem utterly content. They neither resent him when put to death, nor praise him when richly rewarded. They grow more virtuous and benevolent every day, without ever realizing who makes this happen.
“So it is that when the noble-minded pass through a place, they leave transformations behind. And when they dwell in a place, they work miracles. They grace the same stream as Heaven above and earth below: who can doubt their healing power?”