Confronted with the unshakeable bond with her dying mother, a daughter runs a last errand to go shopping for underwear. 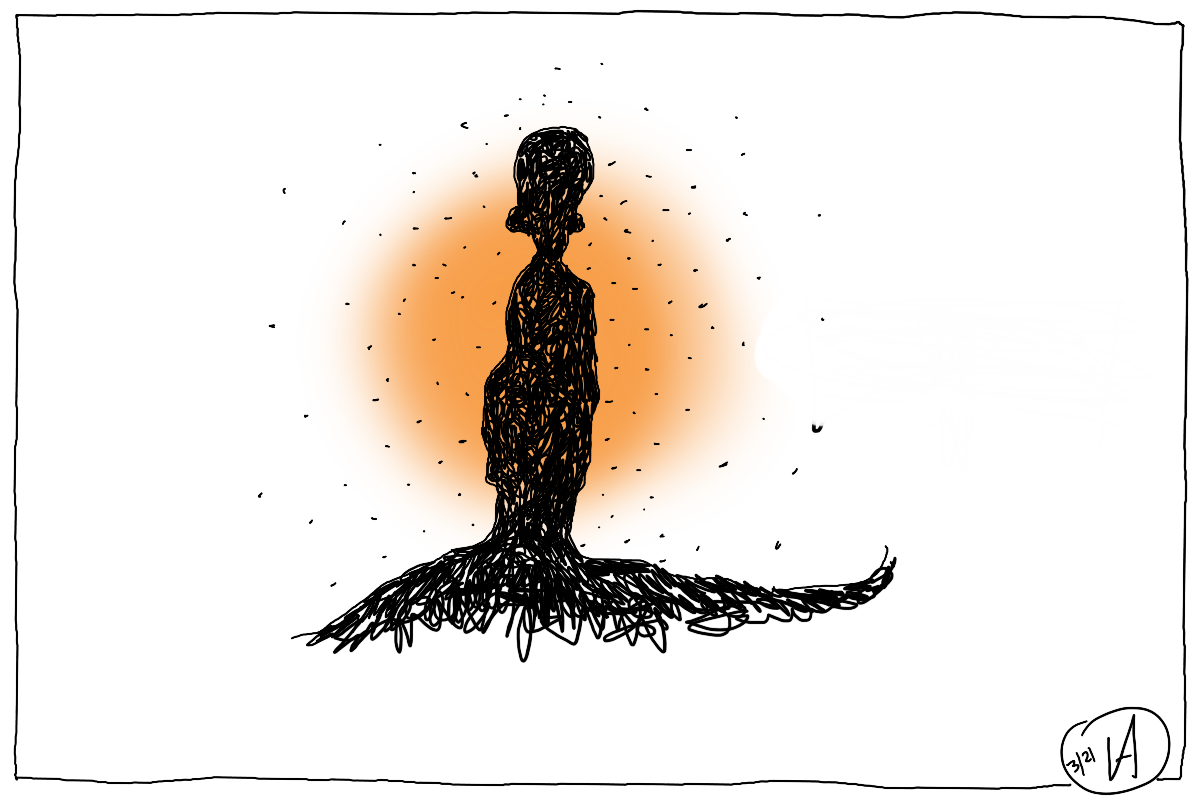 I LINGERED IN THE DOORWAY of my mother’s hospital room and scanned the scene.

My father was hunched over her bed in a familiar, hovering position. The lights were off, the long, sage-colored curtains were open. Squinting, all I could see was white. Everything hurt.

Then I saw her.

She had lost weight and her hair was thin. In fact, everything about her appeared thinner than normal. My mother looked exactly like a person who is dying is supposed to look: pale, scant, receding. Before I walked into the room, I told myself not to react, not to treat her like a dying person.

Approaching her bed, I leaned in for a kiss. Her skin smelled like sweat and sick and faintly like hospital soap. She was wearing a nightgown from home, one had I had borrowed as a child. It was a long t-shirt, black, short-sleeved, V-necked, and on the front of it, there was a metallic silver scene of two cats sitting in some grass. The sight of her wearing it was a strange comfort and relief—taking the sight of her in, I let out a sigh as if dignity were mine to give. The cotton looked soft, worn, assuring. I was overcome with an urge to climb into the bed with her. I imagined pulling the dress over my head and burying myself in its softness. Instead, I walked over to the window and sat down on its hard edge.

My mother looked at me with love and reproach. There were things I wanted to say, things I could feel myself wanting to say, but I couldn’t find the words. Emotion hung in my throat. She looked so tired, sad, and defeated. She sat up a little and asked, “How was your flight, honey?” Before I could answer, my father snapped, “It’s about time you got here.” And I both hated him and waned to dive into his arms.

I wanted to tell her something good, instead of what was really on my mind. I didn’t know how to say that I was scared or confused, or how much I loved her. I was afraid if I said those things, it would make whatever was happening more real. So I told her about other, uncomplicated things—my boyfriend, work, and what it was like skiing champagne powder, and especially how terrible I was at it. I told her all about falling down and how I couldn’t get back up, and as I told her the story, I flopped my arms around and kicked my legs out, trying to make her laugh, and it worked. Her laugh was weak, but generous, and listening to her, a warmth spread through my chest. For a single moment, it felt like just the two of us in that room, sort of like it always had been, just two of us against the world. When then, my father walked out into the hallway, I touched my throat, rejection suddenly seizing my voice.

I excused myself to use the bathroom. The same crossing my mother would take on the night she died. On that night, only a week later, on her way to the bathroom, my mother would collapse onto the floor and lie dying for an undetermined length of time. The crossing between the bed and the bathroom was only about ten steps, the length of two long inward and outward breaths, or a full wet kiss.

When I returned, I just looked at her. The emotion hanging in my throat finally released into a single sound.

The next day, at the hospital, the scene was the same.

My father pacing back and forth, glaring at me, growling words of incompetence to the nurses, and himself.  He wouldn’t leave my mother alone. Each time she dozed off, he would walk over to the bed, touch her arm or the top of her head, and shake her or say her name until she woke up. It was horrible to watch. Each time, her eyes would flutter open, and she’d ask, “What?” before rolling back over onto her side

A nurse came in with my mother’s lunch. In a casual, upbeat tone she said, “She needs the nutrients,” and waved a can of Ensure in the air. Then I watched as the nurse woke my mother up by tapping her lips with a straw.

My mother had this certain look that warned you when you crossed a line. It was a great look. Her lips would disappear, and her green eyes would darken, appearing hollow in her beautiful, delicate face. It was confusing and also funny because it was hard to take the look seriously, given that the rest of her was so soft. But it was a look that worked when it needed to, and she flashed it at the nurse as she tapped her lips. I had to hand it to my mother: her fortitude, her will. She would not be beat.

She was sitting up in the bed now, sipping her vanilla drink, and my father and I were arguing. My mother’s mysterious illness had coincided with my moving to Colorado. For my father, this was enough to blame me entirely for her deterioration. “What’s wrong with you, Jocelyn?” he told me. “Your mother is dying, she’s been sick ever since you left.”

I stared at him. I looked at her. It didn’t make logical sense, and yet I had to wonder—Was he right? Was this somehow my fault? A frightening thought came to mind. It was a bad thought. I hated it. I willed it to float away toward the sea of lost thoughts. If my mother died, I wouldn’t have to lie anymore. I wouldn’t have to pretend, for her sake, that we were a good family, a healthy family. That everything was alright. The weight of this mounted like a wave before quickly subsiding. It felt too close to a wish. I hated myself for that. For thinking about freedom, when right in front of me, my mother was dying.

She called my name, a reprieve.

I watched as she pulled her purse off the nightstand and onto the bed. She still had a little bit of strength left. I had the feeling that she wanted to get me out of the hospital, away from the inevitable, away from my father. She was always protecting me, like I tried to protect her; neither of us wanting to admit when we reached our limits.

She asked me to run an errand for her, she needed underwear. “You’ll know what kind.” As she said this, she held up a pair of high-waisted, cotton panties that my brother had bought for her. She didn’t have to say anything else for me to know that they were all the wrong style, and I laughed, and she let out a small laugh in return. A stray memory of myself as a child searching through her underwear drawer for the woman things she kept hidden flashed through me. And as I agreed to her request, there, for a moment everything felt alright, almost normal. The bond between us, and most of all, that she hadn’t lost her beautiful, unadorned sense of humor.

I took the twenty, and walked down the hallway, past the nurse’s station, and stood in front of the elevator. For a long, unsettling moment, I felt nothing. I did not feel afraid or sad or confused or even angry. I did not feel anxious or remorseful. Instead, I felt empty. Passive. Impotent. I squeezed my right hand into a fist as hard as I could and pressed my nails into my palm, desperate to feel something. It hurt, but it wasn’t enough. The elevator door opened, and I stepped in, letting it shut me into its mouth. The gravity of things was near. When the door opened again, I wanted to run.

I am trying to think of a time when the three us were together: my mother, father, and me.

Here it is: I was eight years old and it was December, same as the day I visited my mother in the hospital. The three of us had driven to the Rhode Island coast; my father loved the ocean. I remember the air was brisk and almost unbearably cold, but being there was wonderful because the three of us were together.

Out of East Beach, the Atlantic thundered. The wind howled, and as we walked, our weight cracked the sandy patches of ice and snow scattered across the beach. We held each other close, laughing. To be there was ridiculous and awesome—it was so cold!

Soon, my father broke away from us to walk closer to the water. We stopped to watch him, bobbing our knees up and down to keep warm. The wind whipped our hair and I remember the taste of salt in my mouth.

I watch as my father took a deep intentional breath and then let out a sigh so loud that we could hear it from where were standing. It looked like his entire body had deflated, softened, like he was home.

The mall was decorated for Christmas. Blue, green, red, and yellow lights, some sparkling, others dull in their glow. There were evergreen and holly wreaths, and garland, and gold and silver trimmings. I hated all of it. All of it was an affront to the fact that my mother was dying.

I kept thinking about my mother’s request for underwear. I had to give it to her, to care about this thing that would otherwise seem so trivial.

My mother’s mystery sickness had caused her to become incontinent. And if she wasn’t soiling all of her underwear, she was throwing up. It was as if everything that was housed inside of her was in revolt. Earlier that afternoon, I’d watched her try to maintain her dignity while she vomited into a pink plastic half-moon receptacle. She turned her face away from me as she emptied herself into it. I took the half-moon to the bathroom and washed it out. I dumped the bile into the toilet. It was putrid green and smelled rotten.

I understood my mother’s request. It wasn’t about the underwear. It was about the part of her and her femininity that she insisted remained uninterrupted. It was the most honest and human thing about that time, how intimately self-aware she was.

In Filene’s I headed straight for the lingerie department, still clutching the twenty. The tips of my fingers were chilled blue. A sales associate asked me if I needed help finding anything, but I said no.

The sales associate watched me as I fingered through all the pastel colors, lace, satin, animal and floral prints. I was deranged with the selection. It felt like the most important decision I would ever make. I smiled a half-smile at her. Her attention made me feel rushed, under pressure. A flash of heat came over me. I settled on a smart, sensible three-pack of satin bikini briefs, one in leopard print, that are all high-cut on the leg. 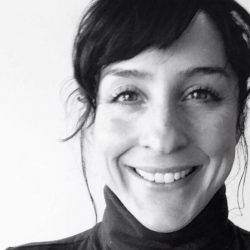 Jocelyn Ulevicus is an artist and writer with work forthcoming or published in magazines such as The Free State Review, The Petigru  Review, Blue Mesa Review, and Humana Obscura. Working from a female speculative perspective, themes of nature and the unseen; and exit and entry are dominantly present in her work. She resides in Amsterdam and is currently working on her first book of poems.

1 thought on “Three-Pack as Another Name for Beauty”