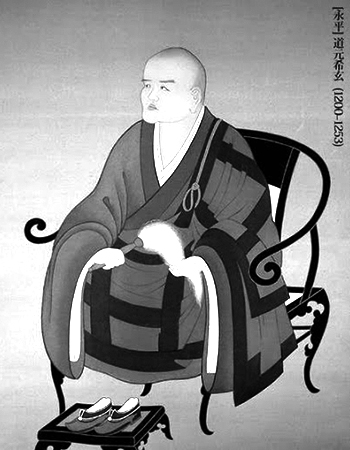 “In this world, inherently each person receives a certain amount of food and clothing as a gift. It does not come by being sought after nor does it stop coming by not seeking after it. Just leave it to fate and do not worry about it.”

The Shobogenzo-Zuimonki is the record of a collection of talks given by the 13th century Zen master and founder of the Japanese Soto school, Eihei Dogen, to a group of his students between the years of 1235 and 1237. In contrast with many of Dogen’s other texts contained in the larger Shobogenzo collection, the Zuimonki is a practical and accessible guide for practitioners of The Way, filled with illustrations and examples for the day to day living of a monastic life. In this excerpt, from Chapter 16 in Book Two, Dogen answers the questions of some of his students regarding monastic renunciation – how can one have faith that one’s basic needs will be met by the community, when they renounce working and providing for themselves? Dogen encourages confidence in the workings of the dharma and the understanding that there is a certain amount of provision that arrives to everyone through most natural means. We must let go of all concerns for our own bodies and health, he says, while also kindly reminding his students that, to the best of his knowledge, not a single renunciate Buddhist master ever died from malnutrition or cold. Read on for another section of the Zuimonki.

Students of the Way, do not worry about food and clothing. Just maintain the Buddha’s precepts and do not engage in worldly affairs. The Buddha said to use abandoned rags for clothing and beg for food. In what age will these two things ever be exhausted? Do not forget the swiftness of impermanence nor be disturbed vainly by worldly affairs. As long as your dewlike human life lasts, think exclusively of the Buddha-Way and do not be concerned with other things.

Someone asked, “Although fame and profit are difficult to give up, since pursuing them is a great obstruction to practicing the Way, they should be abandoned. Hence, I gave them up. Although clothing and food are minor things, they are big matters for practitioners. Wearing clothes made of abandoned rags and begging for food are the practices of superior people. Moreover, that has been the custom in India. The monasteries in China have permanent property belonging to the community, so they do not need to worry about such things. However, the temples in this country have no such property and the practice of begging has not been transmitted at all. What should inferior people like me who cannot endure such practice do? If someone like me tries to gather alms from lay believers, he will be committing a sin by receiving a donation without having virtue. Earning one’s living as a farmer, merchant, warrior, or craftsman is an improper way of life for a monk. And, if I leave everything to fate, I will remain very poor as a result of inferior karma. When I suffer from hunger or am benumbed by the cold, I will be troubled and my practice will be hindered.

Do not store up even what you have been given, nor run around searching for things. In a non-Buddhist text it is said that if we learn the Way in the morning we should not mind dying in the evening.

Someone advised me saying, “Your way of practice is extreme. You don’t understand this age and do not reflect upon your capability. Our nature is inferior and this is the degenerate-age. If you continue to practice in such a way, it will become a cause of backsliding from the Way. Seek the support of some patron, take care of your body by living in a quiet place without worrying about food or clothing, and practice the Buddha Way peacefully. This is not greed for property or belongings. You should
practice after having provided for your temporal means of livelihood.”

Although I listened to his advice, I do not yet believe it. How should we consider these things?”

Dogen replied, “Just study carefully the conduct of Zen monks, along with the lifestyle of the buddhas and patriarchs. Although the customs of the three countries are different, those who truly study the Way have never practiced in the manner you have described. Just do not be attached to worldly affairs but study the Way in a straightforward manner.”

The Buddha said, “Do not keep anything except robes and a bowl. Give away any extra food you have received through begging to hungry living beings.”

Do not forget the swiftness of impermanence nor be disturbed vainly by worldly affairs. As long as your dewlike human life lasts, think exclusively of the Buddha-Way and do not be concerned with other things.

Do not store up even what you have been given, nor run around searching for things. In a non-Buddhist text it is said that if we learn the Way in the morning we should not mind dying in the evening. Even if we might die of cold or starvation, we should follow the Buddha’s teaching if only for one day or one hour.

In ten thousand kalpas and thousands of lives, how many times are we born and how many times do we die? This cycle of lives is samsara, caused only by blind clinging to worldly affairs. To die of starvation following the Buddha’s teachings for this one life brings about eternal peace and joy (Nirvana). Moreover, I have never read in the collection of all the Buddhist sutras of a single buddha or patriarch who transmitted the dharma in the three countries, dying of starvation or cold. In this world, inherently each person receives a certain amount of food and clothing as a gift. It does not come
by being sought after nor does it stop coming by not seeking after it. Just leave it to fate and do not worry about it. If you refrain from arousing bodhi-mind in this life, excusing yourself on the grounds that this is the degenerate-age, in what life will it be possible to attain the Way?

Even if you are not as superior as Shubhuti or Mahakashapa, you should practice to your fullest capability. In a non-Buddhist text it is said that a man who loves women will do so even though they might not be as beautiful as Mosho or Seishi (Xishi), and that a person who admires horses will do likewise even if they are not as great as Hito or Rokuji. One who likes the taste (of food) will like (whatever it might be), regardless of whether or not it is as delicious as dragon’s liver or phoenix
marrow. We simply have to use as much wisdom as we possess. Even laymen have this attitude. Buddhist practitioners must be like this.

Moreover, the Buddha offered twenty years of his life to us living in this degenerate age. Consequently, the offerings and support by human and heavenly beings to the monasteries in this world have not ceased. Though the Tathagata had mighty powers and virtues and was able to use them at will, he spent a summer practice period eating wheat used for horse fodder. How can his disciples today help but look up to this (example)?

If a single man of wisdom appears, the country will flourish, and if a single fool appears, the way of the ancients will disappear. Consider this well.

Someone asked, “Rather than meaninglessly receive the offerings of human or heavenly beings while breaking the precepts, or wastefully spend the legacy of the Tathagata without arousing bodhi-mind, wouldn’t it be better to live as a layman, engaging in ordinary jobs, keeping oneself alive to continue the practice of the Way?”

Dogen replied: Who said to break the precepts or be without bodhi-mind? You have to force yourself to arouse bodhi-mind and practice the buddha-dharma. Moreover, it is said that the legacy of the Tathagata is equally given without concern as to whether one maintains the precepts or breaks them; regardless of whether one is a beginner or an advanced practitioner. Nowhere is it written that you have to return to the mundane life or stop practicing, because you have broken the precepts or lack bodhi-mind. Who has such bodhi-mind from the beginning? Arousing what is difficult to arouse, practicing what is difficult to practice… in this way, you will naturally progress in the buddha-dharma. Each one of us has buddha-nature. Do not meaninglessly deprecate yourself.

1 thought on “As Long as Your Dewlike Human Life Lasts”