I DON’T WANT TO WRITE about the Seventh-day Adventists, the people who raised me with love and judgment, Jesus and the Apocalypse. When I left, I thought I could keep the love and forget the wrath.

I did forget for a while. I went to work, made dinner, watched Netflix, just like a regular person. When I couldn’t evade the question of where I came from I’d make a joke, saying, “They don’t dance and they don’t drink.” Everyone always laughed because I’d say it with a drink in my hand.

And I thought I forgot until an Adventist pastor’s post on Facebook brought everything that had simmered under the surface to a boil, erupting in big blocks of text detailing how they’d hurt me.

I notice the little things too, like how I freeze when writing a sympathy card, not knowing whether to write “I’m thinking of you” or “I’m praying for you.”

I go to church twice a year, to the kinder, gentler Episcopalians, but I panic when anyone greets me because I’m afraid they might think I’ll join them.

And even though I teach World Religions, the first time my kids asked about good and evil, I fell back on the teachings I was raised with. The next time, I told them what the Buddhists teach, what the Christians teach and what the Zoroastrians teach, but I think the academic detachment might be as bad as the dogma.

So I write and I drink and I think I’ve lanced the abscess and drained the infection. But then I have to research it and write about it more. I wonder if I’ll ever be able to write about anything else. I think I will, but I pour another glass of wine because I still have more to say. 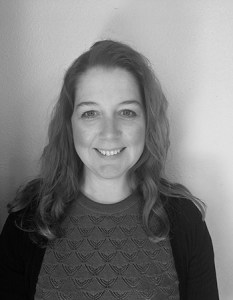 Michelle Nicolaysen lives and works with her husband on a sheep and cattle ranch in Central Wyoming. They have three kids and a dog. She received her MA in Religious Studies from Arizona State University and now ponders the role of religion in our world with her Introduction to Religion students. Her work has appeared in Hash Journal.