A potential relationship with a cute barista hinges on whether or not I can find a candle at Target that can accurately confirm my identity. 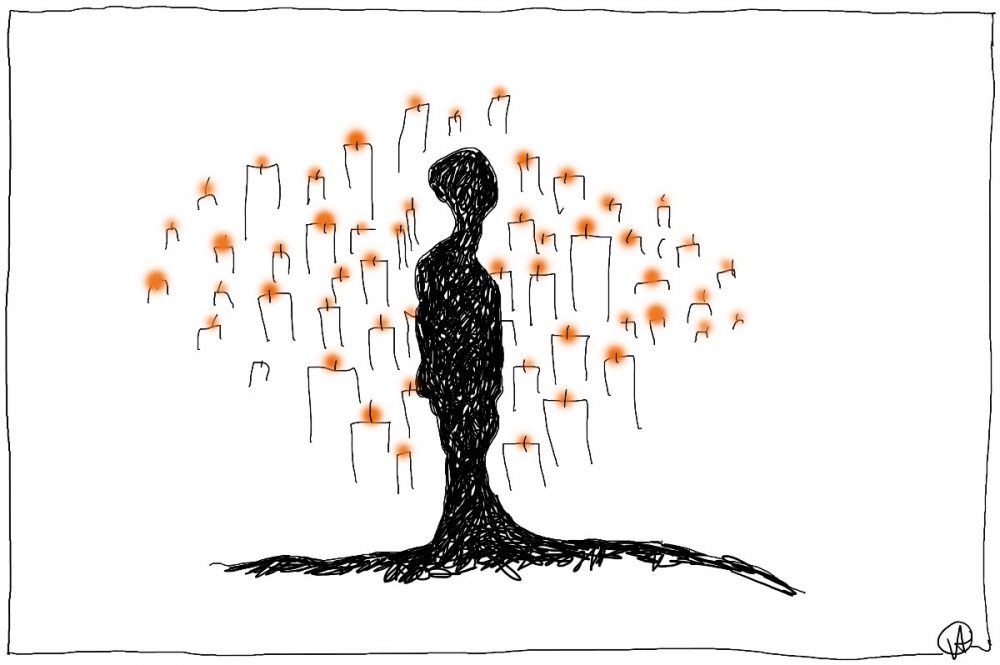 I’VE MET SOMEONE AND THEY’RE NOT PERFECT. But nobody is. I don’t need perfect. I need manageable and I need pragmatic. That’s exactly what this guy is. I assume. I don’t really know him. But I think I can tell. Normally, when I meet someone in this sense (and by ‘this sense,’ I mean I might love him), I start to freak out — go a little bonkers for a while. This time my head is on my shoulders and I’m thinking clearly which is good, because I have a huge decision to make. I have to decide whether or not to buy a scented candle from Target.

I recently moved into a new apartment which is a nice way of saying I moved into my uncle’s guest house. Scented candles are the next logical step to take this bachelor pad (within earshot of my extended family) up a notch. My problem is that I can’t figure out what that next notch is. I think it’s a scented candle.

I could go earthy and vanilla. It’s good and calming, like moisturizer. It reminds me of skin. I can light the candle, wear some linen, and maybe be the kind of person who doesn’t get a rash when they go to the beach.

I could go sweet and floral. It’s great for taking deep, pensive breaths. It would go well with the feminine energy I have in my new apartment (that’s really my uncle’s guest house). Maybe I would seem like the kind of person who thinks about what they’re going to say before they say it, instead of blurting out every meandering thought I have.

I could get one of those candles that’s marketed towards men. The ones that look kind of like leather and smell musky. I am a man after all, right?

Maybe I should get a candle of the Virgin De Guadalupe.

Decisions like this terrify me. Once you make a decision, you stick to it and you expect outcomes. I can’t simply light a candle to test it out for a hot second and then return it because it isn’t right and try again with another scent, can I? (Can I do that?)

I need to choose a candle. But I don’t know. God. I don’t know. I thought this would be easier. It’s just a candle and just a dude. But he is barista. He’s really cute but not out-of-my-league cute. Practical and cool cute, which is good. It’s perfect. Well, not perfect, but you get it.

I want to make a good impression. I want to smell good, but the right kind of good. I don’t want to reek of indecisiveness and insecurity. I thought this would be easier.

I want to say for the record that I had bigger plans for myself than ruminating over scented candles from Target and obsessing over a barista who makes — honestly — okay coffee. I had plans to move to Atlanta, Louisville, or Berkeley, all in an effort to start myself up a career doing something theatrical. I had this whole vision, where small-town-boy turns into a big-city-lady (or really, medium-sized-city-lady), chasing her dreams and bouncing boys off her hips with every stride. I imagined myself like a L’Oreal commercial. I was gonna exercise. The whole shabang. Anyway, all of that fell through so now I’m gonna ask this barista out, I think, if I can decide on a candle.

Maybe this is a bad idea. He still doesn’t know my name and I go into the coffee shop often enough that I would consider myself a regular. I’ve tried to flirt. I always tip him way more than I should, like he’s a stripper. I compliment him frequently, like he’s a stripper. I uproariously laugh at his jokes, like he’s a stripper. On days when I’m feeling particularly audacious, I look at him with my eyes wide open and tits pushed together a little (because a magazine at Target suggested it would convey attraction).

Perhaps he can’t remember me because I’m too vanilla? So then I shouldn’t get a candle that smells like vanilla, because then I’ll really be too vanilla.

I guess, I haven’t been feeling like myself lately. I’ve been feeling funky. (Not funky like fresh, but funky like cheese.) I’ve been really tired, really bored, maybe allergic to alcohol, and my libido is at an all time low. But there’s this guy, who isn’t perfect. But who needs perfect? I don’t. I guess. I just need something. I need something to go my way and I need to stick with it.

One time, I went into the coffee shop on a day when I decided to wear a hat. I never wear hats. Never. I never do. But I was trying to become a hat person because I felt like I needed to expand. Who knows? Maybe Hat Me is the new me. Then I thought if I wear a hat more often this barista will be like, ‘Wow. That hat guy is definitely cute and flirting with me.’

However, I’m worried that he and other people can tell that I never wear hats and that I’m nervous about it. That they’ll see me wearing the singular hat that I own and say to me, ‘Hey, guy. I know you don’t wear hats normally and I know that you’re a fucking phony.’  I certainly don’t want to give off the impression that I’m a phony.

It’s so stupid how important small things can become.

The other day, my mirror made me look pregnant. I looked nine-months-pregnant pregnant. For a second (or two or three), I believed it. Which I know is crazy, because based on when I last had sex I couldn’t be nine months pregnant. But it did get me thinking. What if I was pregnant? What if? What would I do? Would I keep it? What would I do with a baby? How would I be as a new parent? I can’t imagine very good. I’m very nervous and frazzled and kind of clumsy. (Also, my succulents keep dying.)

I could forget about scents altogether and get the Virgin de Guadalupe. Smoke my insecurities and fill my apartment (that’s really my uncle’s guest house) with the Holy Spirit and let fertility flow through me like a pot about to bloom.

This barista could be my baby daddy. He seems responsible. It would be perfect. I mean, not perfect, but who needs perfect? I don’t. He wouldn’t even have to stop barista-ing. I could stay home to take care of the baby while he works. It’s not like I have a career that I’m abandoning. I have a bachelor’s degree in Creative Writing and a job at a grocery store where my boss keeps forgetting my name. Who have I become?

I was smoking weed recently, which I do now. It’s a new thing. I went to the bathroom. As I was washing my hands, I looked in the mirror and didn’t recognize myself. In the moment, it felt like one of those stoned realizations you have sometimes. The kind where you realize: no duh I don’t recognize myself. I never see myself.

That however turned into a holy-shit-I-really-don’t-recognize-myself feeling, like who have I become? Who am I anymore? Then I got high with one of my friends and it turned into: holy shit I don’t recognize her either. It really freaked me out.

At work, I googled if I was schizophrenic. I’m only concerned about it because I have a cousin who’s schizophrenic. (Well, she’s my second cousin and technically her grandmother was my grandmother’s half-sister. So we’re related distantly by blood. But she does have Facebook which means her schizophrenia pops up on my feed depending on how she’s feeling. Depending on how I’m feeling, it floats in and out of relevancy.) WebMD seems to think that I’m probably not schizophrenic, but probably anxious. Scented candles are good for anxiety because of the scent.

I need to decide on a fucking candle.

I go to Target because everything is clear. Target has been a staple in my life for as long as I can remember. I was practically raised in Target. Target is my second mother. Target is a beautiful institution that has dictated so much of my life. I wear stripes because of Target. If Target says floral is in, I’m in florals. I bought my Brita filter, mugs, shoes, pants, dish rack, hand towels, floor mats, rugs, hypoallergenic shampoo, hand soap, wifi expander, toilet paper, life and identity all at Target. I am a human Target catalogue. Now all of a sudden, Target has decided to start throwing obstacles in my way, like a thousand convoluted options for candles. None of which seem right for me and this barista.

Something like a god damn candle. A candle with a good scent. Because everywhere I look people have themselves figured out. They buy themselves candles and air fresheners and those pieces of cardboard that hang in your car to make it smell like a forest. I want to smell like a forest, a forest of my own creation. But I don’t feel like a forest. I barely feel like a tree. I’m a succulent. I thought this would be easier. I am nowhere near the person I thought I would be, but I don’t even know what that means. I am me at all times, aren’t I? My head in not on my shoulders. I am not thinking clearly.

There’s this whole design in my head. I come home from working at the grocery store to a crisp, clean apartment (that may or may not be my uncle’s guest house) to start cooking my dinner. I usually work the mid-day shift. Dinner is full of fresh vegetables, farmer’s market quality, the kind that give you hefty farts. I open a bottle of pinot grigio, the dry one my mother has convinced me into liking. I pour it into two glasses I bought at Target so that the barista can join in. He comes over as I finish up dinner, saying, ‘Wow. It smells really good in here.’ I tell him he’s a liar; it’s nothing. He shoves my shoulder back playfully, suggestively. Maybe he’s smitten. Maybe I am too. He tells me about his day, how Liz and his friend broke up. I feign interest (because in all honesty, Liz creeps me out a little). We take in the aroma of the night and everything seems settled for at least a moment (or two or three).

It might seem stupid. It probably is. I’m just not there yet. I’m missing something. My apartment smells like weed and I wear cologne and maybe that’s fine for right now. It’s not perfect, but I don’t need perfect. Some stillness sounds lovely though. A breath would be great. 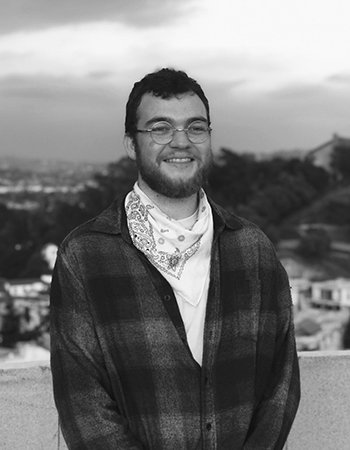 Noah Lashly is a writer from Ojai, California. His work has been featured in Cagibi, Allegory Ridge, Array Photo Journal, The Aonian, Beyond Words, at Speaking of Stories, and on The Townies Podcast. His radio play, produced through Eastside Queer Stories, is available on Spotify. He is also the producer of the Comedy/Party Thing at Kim Maxwell Studio.