In dreams, there is an opportunity to see again those we’ve lost and hear their voices. Brandon McQuade’s poem, Two Whiskies, is a narrative of the author’s dream of a late friend. With fantastic imagery of the melancholy setting, readers are taken along to the dingy bar with the poet and his friend. You can almost taste the smokiness of the scotch. Brandon told The Dewdrop, “Two Whiskies, was written in response to a recurring dream I had following the death of a friend, Silas Rogers.”

with ladders up to the ceiling
like an old library.

I am wearing the pea coat
he passed down to me

and we sit at arm’s length
at the bar, and order two whiskies.

I spin the glass in the palm of my hand
like a bartender forever drying,

swirling the single malt,
while he dips his finger in rare scotch

stirs it around once, then pops
his index into his mouth.

We make a toast, words are exchanged
but the only sound I hear

is the clink that the two glasses make.
His eyes are shrouded by black circles

as if to wash away the pangs of death,
a perpetual migraine. Suddenly,

he has up and left, a gentle ghost—
his glass of scotch empty and dry

as if he’d never been, his footprints
left behind on the wooden floor, in dust. 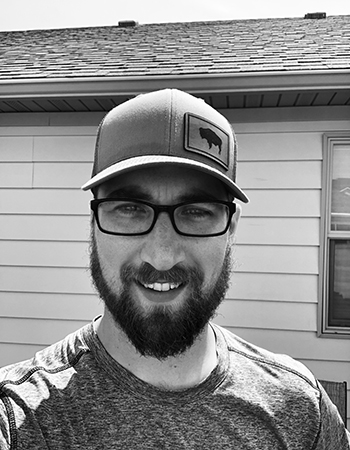 Brandon McQuade is a Canadian poet and editor of Duck Head Journal. His poetry has recently appeared or is forthcoming inThe Kindling Journal, Grand Little Things and Eunoia Review. His poems “The Life of Sunflowers” and “Bay of Fundy” were published in Vita Brevis’ Poetry Anthology Brought to Sight & Swept Away. He was also selected as the Featured Poet in the May Issue of Voices de la Luna. McQuade’s debut chapbook, Bleeding Heart, was published by Kelsay Books, and is available on Amazon. He lives in Gillette, Wyoming with his wife, Jacqlyn and their son, Nolan. Find him on Instagram at @brandonmcquade and @duckheadjournal.