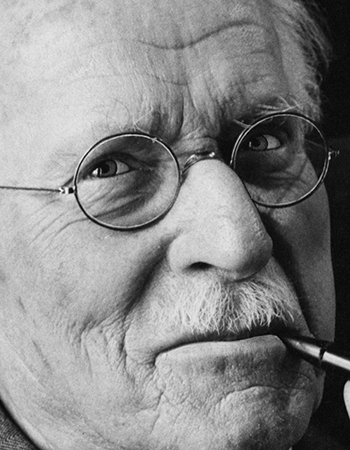 “The various forms of religion no longer appear to come from within, from the psyche; they seem more like items from the inventory of the outside world.” – Carl Jung

In this excerpt from an essay titled The Spiritual Problem of Modern Man, analytical psychologist Carl Jung attempted to mine down to the fundamental issues of the spiritual crisis he saw in people around him, almost a century ago during the interwar period. The groundswell of interest in psychic phenomena and spiritualism at the time was for him an indication of a recognition for mankind that what was needed was far more attention to one’s inner processes after people’s lives had outwardly changed so much after the industrial revolution and technological innovations at the beginning of the 20th century. Jung recognized that when the forms of religion appeared to people more like an inventory of objects rather than something that connected directly with and reflected their own inner lives, the sense of something important missing from their lives would lead them to look for a path back into themselves.

Modern man has lost all the metaphysical certainties of his medieval brother, and set up in their place the ideals of material security, general welfare and humanitarianism. But anyone who has still managed to preserve these ideals unshaken must have been injected with a more than ordinary dose of optimism. Even security has gone by the board, for modern man has begun to see that every step forward in material “progress” steadily increases the threat of a still more stupendous catastrophe. The imagination shrinks in terror from such a picture. What are we to think when the great cities today are perfecting defence measures against gas attacks, and even practise them in dress rehearsals? It can only mean that these attacks have already been planned and provided for, again on the principle “in time of peace prepare for war.” Let man but accumulate sufficient engines of destruction and the devil within him will soon be unable to resist putting them to their fated use. It is well known that fire-arms go off of themselves if only enough of them are together.

An intimation of the terrible law that governs blind contingency, which Heraclitus called the rule of enantiodromia (a running towards the opposite), now steals upon modern man through the by-ways of his mind, chilling him with fear and paralyzing his faith in the lasting effectiveness of social and political measures in the face of these monstrous forces. If he turns away from the terrifying prospect of a blind world in which building and destroying successively tip the scales, and then gazes into the recesses of his own mind, he will discover a chaos and a darkness there which everyone would gladly ignore. Science has destroyed even this last refuge; what was once a sheltering haven has become a cesspool.

And yet it is almost a relief to come upon so much evil in the depths of our own psyche. Here at least, we think, is the root of all the evil in mankind. Even though we are shocked and disillusioned at first, we still feel, just because these things are part of our psyche, that we have them more or less in hand and can correct them or at any rate effectively suppress them. We like to assume that, if succeeded in this, we should at least have rooted out some fraction of the evil in the world. Given a widespread knowledge of the unconscious, everyone could see when a statesman was being led astray by his own bad motives. The very newspapers would pull him up: “Please have yourself analyzed; you are suffering from a repressed father-complex.”

“However true that much of the evil in the world comes from the fact that man in general is hopelessly unconscious, as it is also true that with increasing insight we can combat this evil at its source in ourselves.”

I have purposely chosen this grotesque example to show to what absurdities we are led by the illusion that because something is psychic it is under our control. It is, however true that much of the evil in the world comes from the fact that man in general is hopelessly unconscious, as it is also true that with increasing insight we can combat this evil at its source in ourselves, in the same way that science enables us to deal effectively with injuries inflicted from without.

The rapid and worldwide growth of a psychological interest over the last two decades shows unmistakably that modern man is turning his attention from outward material things to his own inner processes. Expressionism in art prophetically anticipated this subjective development, for all art intuitively apprehends coming changes in the collective unconsciousness.

The psychological interest of the present time is an indication that modern man expects something from the psyche which the outer world has not given him: doubtless something which our religion ought to contain, but no longer does contain, at least for modern man. For him the various forms of religion no longer appear to come from within, from the psyche; they seem more like items from the inventory of the outside world. No spirit not of this world vouchsafes him inner revelation; instead, he tries on a variety of religions and beliefs as if they were Sunday attire, only to lay them aside again like worn-out clothes.