“Today the question of the interface between science and humanity is no longer just an academic matter but should assume a sense of urgency for all those who are concerned with the fate of humanity.” 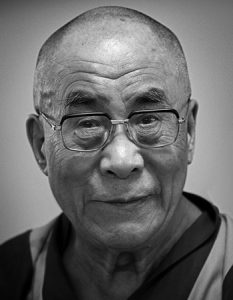 In his quest to bring understanding between disparate groups and seemingly at odds with one another, and in his distinctively enthusiastic spirit of enquiry, the Dalai Lama has spent a lot of his life working with scientists and particularly neuroscientists. In this excerpt from his spiritual autobiography, the Tibetan spiritual leader sets out why science has always been so interesting to him, and how in his mind, the scientific method and goal are in fact very close to the Buddhist one. His approach can be contrasted with Marilyn Robinson’s views on the limitations the materialist attitude of science has put on spiritual enquiry.

In recent decades, we have witnessed prodigious advances in the scientific understanding of the human brain and body, and along with new developments in genetics, the investigation of the functioning of the living organism has now reached the very subtle level of individual genes. Heretofore undreamt-of possibilities for manipulating the very codes of the human being have resulted from this. An entirely new form of realty is now emerging for humanity.

Today the question of the interface between science and humanity is no longer just an academic matter but should assume a sense of urgency for all those who are concerned with the fate of humanity. So it seems to me that a dialogue between the neurosciences and society could help deepen our basic understanding of what it means to be human by defining the responsibilities toward nature that we share with other sentient beings. I am happy to note that, as part of this wider interface, some neuroscientists are showing more and more interest in engaging in deeper conversations with the contemplative disciplines of Buddhism.

I began by approaching the sciences with the curiosity of an insatiable boy who grew up in Tibet. Then I gradually became aware of the colossal importance of science and technology in understanding the contemporary world. Not only did I try to grasp scientific concepts, but I also wanted to explore the wider implications of the recent advances in science for the field of human knowledge and technological ability. The specific realms of science that I have explored over the years are sub. atomic physics, cosmology, biology, and psychology.

“On the philosophical level, Buddhism and modern science both question any notion of the absolute, whether it presents itself as a transcendent being, an eternal, unchanging principle, or as a fundamental substratum of reality.”

The limited understanding I acquired in these disciplines I owe to the hours that Carl von Weizsäcker and the late David Bohrn generously shared With me. am profoundly grateful to them, and  regard them as my professors Of quantum mechanics. In biology and the neurosciences, my teachers were Robert Livingstone and Francisco Varela, both now deceased. I also owe a lot to the many eminent scholars With whom I have had the privilege of talking under the auspices of the institute that initiated the “Mind and Life” conferences at my residence in Dharamsala, India, in 1987.

I understand that many of you are wondering, “Why is a Buddhist monk so interested in science? What connection can there be between modern science and Buddhism, an ancient Indian philosophical and spiritual tradition? What sort of benefit can a discipline such as the neurosciences gain by engaging in a dialogue with the contemplative Buddhist tradition?”

Although our tradition and contemporary science have evolved from different historical, intellectual, and cultural roots, I believe that at bottom they share a similar philosophical outlook and methodology. On the philosophical level, Buddhism and modern science both question any notion of the absolute, whether it presents itself as a transcendent being, an eternal, unchanging principle, such as the soul, or as a fundamental substratum of reality. Buddhism and science prefer to take into account the evolution and emergence of the cosmos and of life, in terms of complex interrelations stemming from the natural law of causality.

“The primary orientation of our investigative tradition has been to understand the human mind and the different ways it functions.”

As for their methodology, both traditions insist on the role of empiricism. Thus, in Buddhist investigation, out of the three sources of knowledge—experience, reason, and testimony—it is experiential proof that takes precedence, with reason coming second and testimony last. That means that, in Buddhist questioning of reality, at least in principle, empirical proof holds sway over scriptural authority, no matter how venerated a scripture may be. Even in the case of knowledge deduced by reasoning or inference, its validity must ultimately be confirmed by factual experience.

Because of this methodological viewpoint, I have often pointed out to my Buddhist colleagues that the empirically verified discoveries made by modern astronomy should compel us to modify and, in some cases, reject many aspects of traditional cosmology expounded in ancient religious treatises.

Since the primary motive of Buddhist analysis of reality is a fundamental quest to overcome suffering and perfect the human condition, the primary orientation of our investigative tradition has been to understand the human mind and the different ways it functions. The presupposition is that by acquiring a more profound understanding of the psyche, we will find the way to transform our thoughts, emotions, and their underlying propensities so as to define a healthier, more satisfying way of living.

“An authentic exchange has been established between the accumulated knowledge and experience of Buddhism and modern science on the great questions dealing with the human mind.”

In such a context, Buddhist tradition has provided an exhaustive classification of mental states, as well as contemplative methods aimed at refining certain qualities of the mind. An authentic exchange has been established between the accumulated knowledge and experience of Buddhism and modern science on the great questions dealing with the human mind, from cognition and the emotions to the understanding of the brain’s inherent capacity for transformation. This dialogue has turned out to be profoundly interesting and beneficial. For my part, I have drawn much from my conversations with neuroscientists and psychologists when we discussed the nature and role of positive and negative emotions, of attention, imagery, and cerebral plasticity. The indisputable proofs furnished by the neurosciences and medicine on the crucial role of affection transmitted by simple physical touch in regards to the physical development of a newborn infant’s brain during the first weeks of life confirm the close link between compassion and the human quest for happiness.

From: My Spiritual Journey

2 thoughts on “Why is a Buddhist Monk So Interested in Science?”