“Keep in mind the meaning of
your existence: wherever you land,
your footprints will become milestones.” 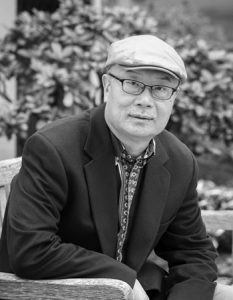 Ha Jin is a poet and novelist who moved to the United States from China in 1985. Having originally learned English from listening to the radio, Ha Jing is known for the simplicity of the language he employs in his poetry and prose. In the tradition of the ‘Misty Poets’, he has been critical of the Chinese government’s restrictions on art, and much of his work, like the poem below, embodies the alienation and detachment of someone far from their homeland. This particular kind of homelessness is also a place of freedom: “They get their bearings/by stars, their roots growing at the end/of the imagined sky.”

Still I praise those who are detached
from any land, who, since birth,
have been determined to travel far in search
of home. They get their bearings
by stars, their roots growing at the end
of the imagined sky.

For them, life is a tortuous journey
and every stop a new departure. They
know they will disappear on the road,
but as long as they are living,
death keeps them company
to the destination they have envisioned,
though they have no idea
whose maps their footprints might update.

Ha Jin
From: A Distant Center