“It did not look like the moon. It was enormous and black. If I had not read that it was the moon, I could have seen the sight a hundred times and never once thought of the moon.” 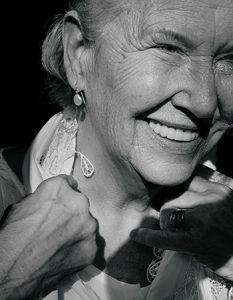 The New York Times once described Annie Dillard not as a specific kind of writer but as a consciousness, ‘an abstract, all-encompassing energy field that inhabits a given piece of writing the way sunlight clings to a rock.’ The essays in her collection The Abundance are a powerful account of existence within nature, all the aspects of nature that astound and transform the author. This extract is from a story called Total Eclipse in which she describes her experiences of watching solar eclipses and the radical moments of transition they brought on.

I saw, early in the morning, the sun diminish against a backdrop of sky. I saw a circular piece of that sky appear, suddenly detached, blackened, and backlighted; from nowhere it came and overlapped the sun. It did not look like the moon. It was enormous and black. If I had not read that it was the moon, I could have seen the sight a hundred times and never once thought of the moon. (If, however, I had not read that it was the moon—if, like most of the world’s people throughout time, I had simply glanced up and seen this thing—then doubtless I would not have speculated much but, like Emperor Louis of Bavaria in 840, simply died of fright on the spot.) It did not look like a dragon, although it looked more like a dragon than the moon. It looked like a lens cover, or the lid of a pot. It materialized out of thin air—black, and flat, and sliding, outlined in flame.

“The meaning of the sight overwhelmed its fascination. It obliterated meaning itself.”

Seeing this black body was like seeing a mushroom cloud. The meaning of the sight overwhelmed its fascination. It obliterated meaning itself. If you were to glance out one day and see a row of mushroom clouds rising on the horizon, you would know at once that what you were seeing, remarkable as it was, was intrinsically not worth remarking. No use running to tell anyone. Significant as this dread sight was, it would not matter a whit. For what is significance? It is significance for people. No people; no significance. This is all I have to tell you.

In the deeps are the violence and terror of which psychology has warned us. But if you ride these monsters deeper down, if you drop with them farther over the world’s rim, you find what our sciences cannot locate or name, the substrate, the ocean or matrix or ether that buoys the rest, that gives goodness its power for good, and evil its power for evil, the unified field: our complex and inexplicable caring for each other, and for our life together here. This is given. It is not learned.

“In the deeps are the violence and terror of which psychology has warned us.”

The world that lay under darkness and stillness following the closing of the lid was not the world we know. The event was over. Its devastation lay round about us. The clamoring mind and heart stilled, almost indifferent, certainly disembodied, frail, and exhausted. The hills were hushed, obliterated. Up in the sky, like a crater from some distant cataclysm, was a hollow ring.

You have seen photographs of the sun taken during a total eclipse. The corona fills the print, All of those photographs were taken through telescopes. The lenses of telescopes and cameras can no more cover the breadth and scale of the visual array than language can cover the breadth and simultaneity of internal experience. Lenses enlarge the sight, omit its context, and make of it a pretty and sensible picture, like something on a Christmas card. I assure you, if you send any shepherds a Christmas card on which is printed a three-by-five photograph of the angel of the Lord, the glory of the Lord, and the multitude of the heavenly host, they will not be sore afraid. More fearsome things can come in envelopes. More moving photographs than those of the sun’s corona can appear in magazines. But I pray you will never see anything more awful in the sky.

2 thoughts on “When the Sun Disappears”