Vivekananda and the meaning of bhakti, devotional love

“What manifests itself as attraction in the sentient and the insentient, in the particular and in the universal, is the love of God. It is the one motive power that is in the universe.” 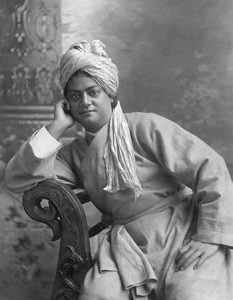 In Hinduism, bhakti is the devotion to a divine being, a practice of love and faith that springs from and moves towards the personal essence of divinity in each individual. In this extract from an essay about bhakti and devotional love written in the late 19th century, Swami Vivekananda – the 19th century spiritual reformist and teacher of Vedanta who was instrumental in popularizing Hinduism and yoga in the west – makes the difference between empty religious ritual and the burning desire for union with God, which is as real as any hunger or thirst. This desire for union exists, he argues, precisely because of the existence of the universal love which is the fundamental binding force and the motive power at the heart of all phenomena.

The vast majority of men are atheists. I am glad that, in modern times, another class of atheists has come into existence in the Western world — I mean the materialists. They are sincere atheists. They are better than the religious atheists, who are insincere, who fight and talk about religion, and yet do not want it, never try to realise it, never try to understand it. Remember the words of Christ: “Ask, and it shall be given you; seek, and ye shall find; knock, and it shall be opened unto you.” These words are literally true, not figures or fiction. They were the outflow of the heart’s blood of one of the greatest sons of God who have ever come to this world of ours; words which came as the fruit of realisation, from a man who had felt and realised God himself; who had spoken with God, lived with God, a hundred times more intensely than you or I see this building.

Who wants God? That is the question. Do you think that all this mass of people in the world want God, and cannot get Him? That cannot be. What want is there without its object outside? Man wants to breathe, and there is air for him to breathe. Man wants to eat, and there is food to eat. What creates these desires? The existence of external things. It was the light that made the eyes; it was the sound that made the ears. So every desire in human beings has been created by something which already existed outside. This desire for perfection, for reaching the goal and getting beyond nature, how can it be there, until something has created it and drilled it into the soul of man, and makes it live there? He, therefore, in whom this desire is awakened, will reach the goal.

“Until that thirst is awakened in you, you are no better than any atheist; only the atheist is sincere, and you are not.”

A disciple went to his master and said to him, “Sir, I want religion.” The master looked at the young man, and did not speak, but only smiled. The young man came every day, and insisted that he wanted religion. But the old man knew better than the young man. One day, when it was very hot, he asked the young man to go to the river with him and take a plunge. The young man plunged in, and the old man followed him and held the young man down under the water by force. After the young man had struggled for a while, he let him go and asked him what he wanted most while he was under the water. “A breath of air”, the disciple answered. “Do you want God in that way? If you do, you will get Him in a moment,” said the master. Until you have that thirst, that desire, you cannot get religion, however you may struggle with your intellect, or your books, or your forms. Until that thirst is awakened in you, you are no better than any atheist; only the atheist is sincere, and you are not.

Love knows no fear. So long as man thinks of God as a Being sitting above the clouds, with rewards in one hand and punishments in the other, there can be no love. Can you frighten one into love? Does the lamb love the lion? The mouse, the cat? The slave, the master? Slaves sometimes simulate love, but is it love? Where do you ever see love in fear? It is always a sham. With love never comes the idea of fear. Think of a young mother in the street: if a dog barks at her, she flees into the nearest house. The next day she is in the street with her child, and suppose a lion rushes upon the child, where will be her position? Just at the mouth of the lion, protecting her child. Love conquered all her fear.

“Who cares whether God is a rewarder or a punisher? That is not the thought of a lover.”

So also in the love of God. Who cares whether God is a rewarder or a punisher? That is not the thought of a lover. Think of a judge when he comes home, what does his wife see in him? Not a judge, or a rewarder or punisher, but her husband, her love. What do his children see in him? Their loving father, not the punisher or rewarder. So the children of God never see in Him a punisher or a rewarder. It is only people who have never tasted of love that fear and quake. Cast off all fear — though these horrible ideas of God as a punisher or rewarder may have their use in savage minds. Some men, even the most intellectual, are spiritual savages, and these ideas may help them. But to men who are spiritual, men who are approaching religion, in whom spiritual insight is awakened, such ideas are simply childish, simply foolish. Such men reject all ideas of fear.

The lover has passed beyond rewards and punishments, beyond fears and doubts, beyond scientific or any other demonstration. Sufficient unto him is the ideal of love, and is it not self-evident that this universe is but a manifestation of this love? What is it that makes atoms unite with atoms, molecules with molecules, and causes planets to fly to wards each other? What is it that attracts man to man, man to woman, woman to man, and animals to animals, drawing the whole universe, as it were, towards one centre? It is what is called love. Its manifestation is from the lowest atom to the highest being: omnipotent, all-pervading, is this love. What manifests itself as attraction in the sentient and the insentient, in the particular and in the universal, is the love of God. It is the one motive power that is in the universe.

“Unattached, yet shining in everything, is love, the motive power of the universe, without which the universe would fall to pieces in a moment, and this love is God.”

Under the impetus of that love, Christ gives his life for humanity, Buddha even for an animal, the mother for the child, the husband for the wife. It is under the impetus of the same love that men are ready to give up their lives for their country, and strange to say, under the impetus of the same love, the thief steals, the murderer murders. Even in these cases, the spirit is the same, but the manifestation is different. This is the one motive power in the universe. The thief has love for gold; the love is there, but it is misdirected. So, in all crimes, as well as in all virtuous actions, behind stands that eternal love. Suppose a man writes a cheque for a thousand dollars for the poor of New York, and at the same time, in the same room, another man forges the name of a friend. The light by which both of them write is the same, but each one will be responsible for the use he makes of it. It is not the light that is to be praised or blamed. Unattached, yet shining in everything, is love, the motive power of the universe, without which the universe would fall to pieces in a moment, and this love is God.

From: The Complete Works of Swami Vivekananda

1 thought on “The One Motive Power in the Universe”