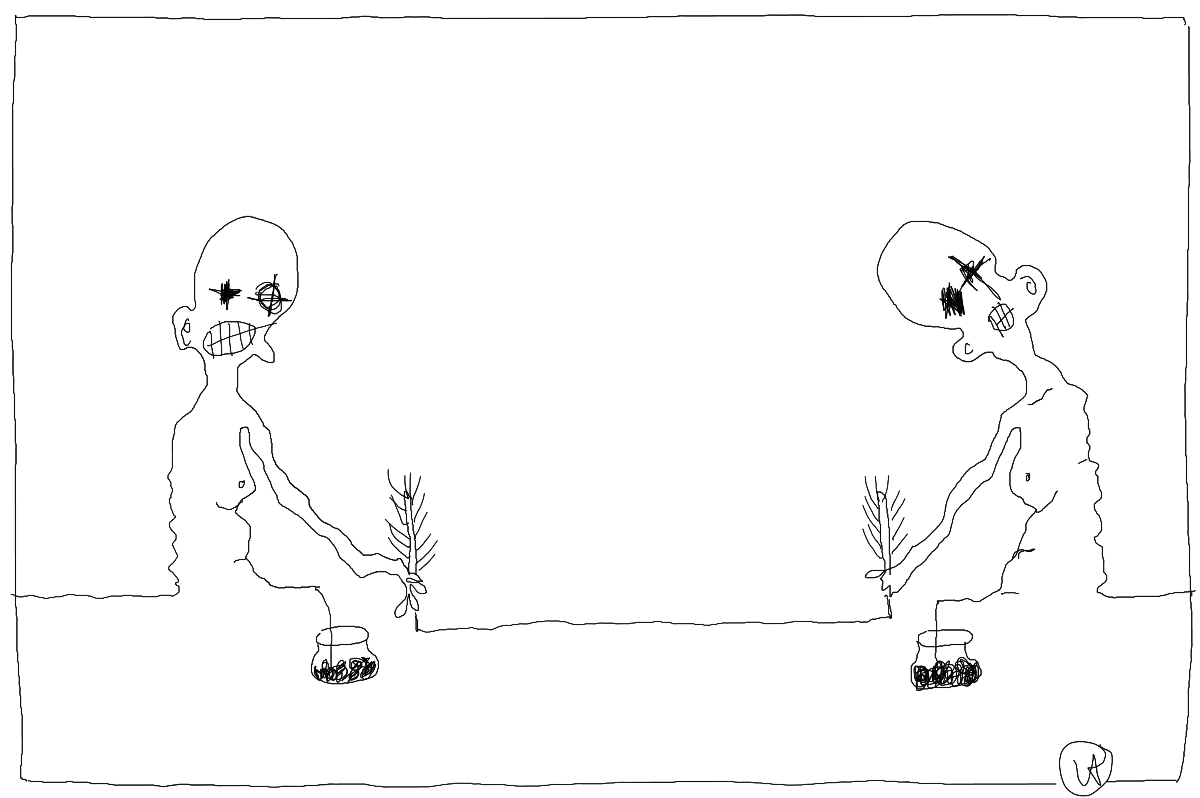 HEY YOU. YEAH, YOU WITH the smudged bifocals and yesterday’s paper, did you forget me already? I’ve been waiting for you all this time. Don’t you recall what it’s like here in The Middle? Back before the lemonade porch and the pair of rocking chairs that look out onto the lawn? I bet you don’t. Has it been such a long, long time since you were back here stumbling through sentence structures and breaking your nails on punctuation marks? I bet you sit around clinking glasses, marveling at the line of fresh typists marching by with their colorful gloves and discreet side eyes.

Reader, do you even know how to measure the Time Between Texts anymore? You used to measure Time in Mobius loops. You could bend it, twist it, and stretch it longer than the hairs on your inner thighs. This is the longest Time in the history of history. It is long enough to re-read every message ever sent, long enough to swipe through all of Park Slope, long enough to text that guy from work who kind-of likes you, and long enough to replay every crash reel from every other almost-something. This is usually when you put your phone on airplane mode for a Minimum Amount of Time. Do you remember this ritual? It was a clandestine rain dance in the back of your mind. It’s the Shrodïnger stopgap between knowing and not knowing. If he texts you, he’ll think you’re on the subway or out doing Something. You could be out doing Something. You have friends and extracurriculars and Ties to the Community. You turn off airplane mode. The guy from work ‘LOL‘-ed at your text. See, you have jokes.

This is when you start making deals with yourself or the universe: Call Mom. Grocery shop. Go to a spin class. Water the plants. Delete old emails. Compliment your coworker’s haircut. RSVP to that art opening in a timely fashion (plus one, just in case). Read an article – okay, the headline to an article – that proclaims people who make their beds are ‘Happier’ and ‘Better.’ Make your bed.

“Onto the Next,” is the Single, Self-Respecting Woman‘s battle cry. You said it to friends when you’re riding high after a first date or a fifteenth or a stretch of open road. Honestly, you would say it to a friend now because there’s really no point in dwelling on all those almost-rights. You tell them, “Dating in this city is an endurance sport.” You say, “Keep an open mind,” because every Next One can be The One or one of The Ones who happens to cross your path when the timing is right and the music is mellow and you’re both having good hair days. It’s just a matter of Time before you’ll melt again.

Your aunt asked you last week, “So, who is the new One?” and the snideness of the question didn’t even chafe because you’ll really take any excuse to talk about him. This One created a pizza gauge to calculate the price of each bite. He’s afraid to shave his balding head. He asked you to stay another day. Is he sitting next to you right now with a comb-over or have you already forgotten his name?

Do you remember the distance between you and him on the couch? It was a small couch, but you weren’t touching. Did you reach for him or did he lean in? You’ve written it both ways. Maybe you should have waited for a more perfect moment. Maybe you waited too long. When he held you, was it just because you were the only one there?

Quick, check your phone. Nothing. Quick, check his Facebook. That was a long shot anyway. Quick, check his Instagram. Posts. Tags. Followers. Followings. Pause for a second to look at that photo of him with his coffee and smile back at his smile. Take a spin through the kaleidoscope of his friends’ profiles for a glimpse into him, and it’s the same carousel of images from last time you did this hackneyed circuit. Until you get to that friend from brunch; a new addition to the checkerboard of moments. It’s innocuous, a picture of a bike or a tree or whatever. Posted four hours ago. He liked it.

“Ugh” is the Single, Self-Respecting Woman’s battle song. It’s the only name for the rot in your gut that you thought you’d dammed up with downward-facing dogs and ocean spray. It hasn’t been that long. People get busy. Ugh.

Is it still called déjà vu if you know exactly why you have this same feeling again? It is. You looked it up on Wikipedia and because the internet is so fast, it only takes twenty seconds. You could be proficient in French before he ever texts you back, and wouldn’t that be a charming anecdote to relay over drinks? “Ah, I was down an internet rabbit hole and je ne sais quoi, let’s go to Paris.” If he ever writes you back.

You people at the ends of this thing, do you even remember that these apps update your location? So, you know that he lives 1.6 miles away, but it’s 2am on a weeknight and he’s 4.1 miles into Brooklyn, so you don’t know if his phone died or if he’s sleeping somewhere else tonight. Or not sleeping. Or maybe he pulled out his phone to show his friend a picture of you and then, just closed the app. You spend almost an hour trying to figure out if there’s a way to tell, but not even Reddit has an answer. So now it’s 3am, and you’ll never really know, so there’s no point in stressing about it. Do you remember learning that you can get strep throat from stress?

I wonder if you remember all the astoundingly thoughtful compliments from all those Ones who never missed you. They were so genuine: your jokes, your hard-earned scar, your doodles in that margin, your way with strangers, your shapes in nakedness, your dedication to your work, your indoor candle s’mores. All these moments patchwork together into a version of a version of you.

When you’re here in The mushy, pungent Middle, you do a side-by-side audit of all these potential factors. Is it the gap between your teeth? His ex was a model with a perfect smile. Or your unused oven? Or your tone deafness? Or the impenetrable clutter in the corner by your door? He gave you that toothbrush so quickly, was that a hint?

Dear Reader, I’m brushing my teeth now, and I’m going to do this twice a day until I catch up to you with the whitest gap teeth and the freshest breath in his impressively extensive social media network. Have you kept my promise?

Do you still double cleanse before the moisturizer and the eye cream and that eighty-eight dollar retinol serum every night, or doesn’t it matter anymore? Did you do the micro-blading and the laser hair removal? Did you find a signature scent? Did you learn all the ways to win friends and influence people at his office Christmas party? Have you ever successfully carried a tune? Did you figure out how to express who you are, what you stand for, and what you want in a cheeky, 300-characters-or-less profile description?

If you’re reading this, give me a spoiler.

I’m back here in The ragged, jagged Present, stuck always, it seems, between these dates and these texts and these one chapter narratives, and I want to know, do you remember? These hours back here, they might as well be decades. Each minute is eleven deep breaths long. Do you remember the seconds, even? They are long enough to harbor second guesses and second opinions and then second, second opinions from other, more optimistic friends.

In all this Time, did you forget that I know you? You have a knack for rewriting history, just like me. We take creative liberties in the name of Story. We didn’t mention a couple paragraphs back that The Pigeon-Toed One had a nasty temper. Or that mushroom forager didn’t do condoms. We didn’t confess how many Libertarians we kept seeing after finding that out (stop doing that, really). We didn’t mention the fizzles and fade-outs and break ups and fake ups and unceremonious dumpings. We’ve had plenty of fifth date flameouts. We probably should’ve had plenty more, if we were really serious about filling that second rocking chair.

We’re probably just addicted to that high. White knuckles clamp down on that text when it comes in, and let me tell you, in case this this part has faded too, that next day is a golden blur. Those hours, minutes, seconds are warm amber crystallized around that message. You are magnanimous in those honey-dipped days. You soar above petty online comments or existential questions. All those minutes you spent piecing yourself into a shape of a shape of you were clocked for this exact instant. You are human Kintsugi.

That perfect wave crests until the next enigmatic betweener moment when the message that buzzes turns out to be from someone else: your neighbors, probably. They are always losing their cat. Ugh shaped like a melon scooper insistently nudging into your chest. It’s such a soft, small rejection. You could wait longer for an aloof rejoinder to splinter in, or longer still, for a truth to seep out. You could write sonnets.

Instead, we’ll hold it together right there on the edge, a mosaicked ceramic, trembling along fault lines. It’s still there. We’ll relive every flash you’ve ever had with this One. We’ll reconsider every life choice that could make you more marketable in a way you don’t care to be.

You text back: you haven’t seen the cat. Make your bed, call your mom, feed the plants, check out that gallery opening (plus no one). Remind yourself you made these life choices because you like your life. Deep breath. Sad Music. Mad Music. Independent Female-led, Baroque, Post-Grunge-Pop-Rock Music. Van Morrison. Deep breath. Onto the Next.

Reader, you better remember this slog when we’re through with it. When that second rocking chair is occupied and you’re pouring out sparkling strands of lemon, I hope you know who grouted the cracks in that porch. I rebuilt that house a dozen times and counting. Each time, I pieced that broken pitcher back together, meticulously, shard on shard, sliver upon sliver. I’m doing it right now with my bare hands and I hope you remember these blisters. I set those two chairs out front. I made the sky blue. I’m crouched back here carving dimples into clouds and hoping that you don’t need to hope this hard anymore. If you’ve made it all the way to here, Reader, leave me your pages. Put down your pen. 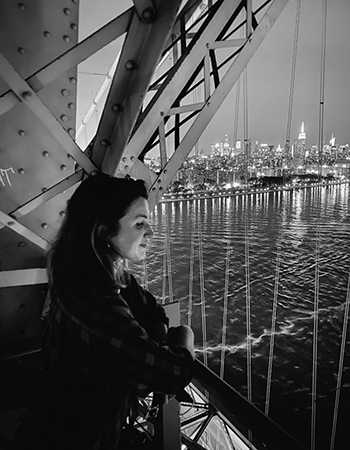 Octavia Rosko lives in a crooked apartment wedged between skyscrapers on the Lower East Side of New York City. She is a freelance documentary producer and director, a yoga teacher and a primary caretaker for an impossibly fickle peace lily. She gets paid to write for television, making figments into concrete commodities, so her recreational writing focuses on capturing intangible, nameless emotions.