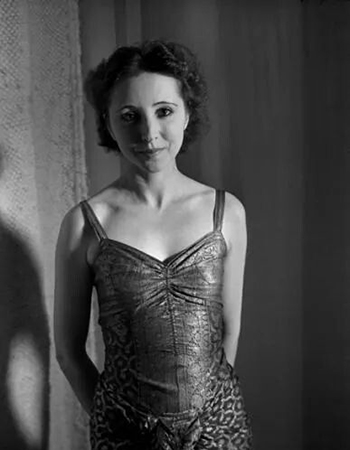 “Music holds the movements of life, the chained incidents which compose it, the eternal melting of one note before another to create song. “

Aldous Huxley wrote that we apprehend God ‘in the spaces that separate the salient features of a picture; in the living geometry of a flower, a sea shell, an animal; in the pauses and intervals between the notes of music.’ In the spirit of contemplating music and the passage of notes, Anaïs Nin also points to ‘the space that holds a loss and an emptiness’ between notes, the site of a sacred interval, and so the redemptive potential of art. In this excerpt from one of her later diaries that was written during the course of her illness with cancer, she is reflecting on her own mortality and expressing what it is to glimpse, in the midst of transience and death, a joyful vision of a land from which we came and which we have forgotten.

In music I feel most deeply the passing of things. A note strikes. It evokes an image. But with another note, this image is altered, it moves, it fades, it passes slowly, it melts into another image. Images of beauty and sorrow pass thus before me and are carried away in the forward movement of music. The note that was struck, and vanished, carried away with its sound the things that are precious. It left, with its echoes, an echo of things that are gone. Between it and the other note that is coming, there is a space that holds a loss and an emptiness. Music holds the movements of life, the chained incidents which compose it, the eternal melting of one note before another to create song. The notes must melt before one another; they must be lost after they have given their soul, for the sake of the whole. It may be a beautiful note, but it cannot strike alone forever. It must pass, as all things must pass, to make up the immense composition that is life.

Dick Stoltzman, clarinetist, and Bill Douglas, pianist-composer, came to play for me. They played Bill’s compositions and improvised. The tenderest, most lyrical music. Incredible people—unspoiled. Their music undulates tenderly, the waves of feeling ebbing and flowing like gentle tides. No harshness, no dissonance, no savagery of rock and roll. The sweetness of tropical climate, and outburst of joy, playful, wistful, without diffusion.

The pool is steaming like those pools in the mountains of Japan, everything through glass, through prisms, the amethyst water acquires a different dimension, it enlarges itself, its colors; it is so beautiful.

The musicians are playing the Schubert cello quintet—the long sweetness, tender accents, the wistful, lingering plaint and bursts of joy. Joy wins out. Every note is set dancing, starting gently, ending vigorously. Then the plaint again, the repetition of the longing, the tenderness, the heartbeat and a burst of ecstasy. The lyrical tones mingle with soft shadowy secrets—feelings are suspended—then burst open, step step step toward intensity. Always a reverie, gentle and in unison, and then a tempestuous meeting of all the instruments.

“The notes must melt before one another; they must be lost after they have given their soul, for the sake of the whole. It may be a beautiful note, but it cannot strike alone forever. It must pass, as all things must pass, to make up the immense composition that is life.“

Peace, serenity, storm and undercurrent of intensity. The intensity wins in harmony and in moments of repose, reverie. The lullaby sets you dreaming, you float on the tenderness, but a storm awakens you. Gently now, the violins, the viola, the cellos lull you, repeating your most secret wish, lulling, caressing, swinging on a hammock of silk. Then the inner fires of the world burst and burn and spill over. All the reveries are forced to hide—one does not hear them anymore. Then the instruments seem to mourn the early reverie and seek it again. Drops of water from the trees, gold sparkle on the sea, words of passion, caressing notes, all light and sorrow.

The quartet played Debussy. It unleashed a flood of tears. I did not want to die. This music was a parting from the world. Music was always the music of exile. There existed another world I had been exiled from, the possibility that music was an expression of a better world. That is why I am moved by the Peruvian flute, the conch shell of the Tahitians, by the music of Satie and Debussy, who were the most aware of that other world. Satie’s music is nothing but nostalgia.

My attitude toward music was always nostalgic. Emotional. I was never cold or detached or intellectual about music. I never tried to explain the feeling of exile. I accepted the weeping.

I talked with Joaquin. I said that the cry of music may have meant sorrow over exile from another world, a better world. Yes, he knew about the new world lost to us, about exile and a lost land. Yes, he knew the longing. My father felt this. Joaquin mentioned at what times he wept.

Today I asked a remarkable man, my healer, Dr. Brugh Joy. He feels the same way. Yes, music indicates another place, a better place. This was the place from which we were exiled for some great punishment which the Catholics call “sin” and other religions “evil.” But what I do not understand is that some evil, sadistic, cruel people do not seem to remember having lost such a place. Perhaps to them music is an undiscovered realm. But for us it enters the body, it fills the body. Brugh explained that the tears come from remembrance of that place. And we cry because we sense at last the return home. One should think of this place joyfully. Then if it follows death, it is a beautiful place. A lovely thing to look forward to—a promised land. So I shall die in music, into music, with music.

1 thought on “The Expression of a Better World – Anaïs Nin on Transience and the Painful, Familiar Beauty of Music”