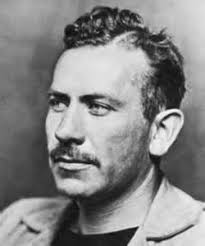 East of Eden was John Steinbeck’s epic novel written later on in his life that was based on the history of his family in the Salinas Valley in California. With frequent references to the Book of Genesis, the story addresses questions about the fundamentals of human nature, most notably the perpetual struggle within ourselves between virtue and vice, ‘the warp and woof of our first consciousness.’ In this extract, taken from the introduction of the fourth section of the book, Steinbeck goes on to assert that ‘underneath their topmost layers of frailty men want to be good and want to be loved’ and that the base nature of vice is really an attempt at a shortcut to love.

A child may ask, “What is the world’s story about?” And a grown man or woman may wonder, “What way will the world go? How does it end and, while we’re at it, what’s the story about?”

I believe that there is one story in the world, and only one, that has frightened and inspired us, so that we live in a Pearl White serial of continuing thought and wonder. Humans are caught—in their lives, in their thoughts, in their hungers and ambitions, in their avarice and cruelty, and in their kindness and generosity too—in a net of good and evil. I think this is the only story we have and that it occurs on all levels of feeling and intelligence. Virtue and vice were warp and woof of our first consciousness, and they will be the fabric of our last, and this despite any changes we may impose on field and river and mountain, on economy and manners. There is no other story. A man, after he has brushed off the dust and chips of his life, will have left only the hard, clean questions: Was it good or was it evil? Have I done well—or ill?

Herodotus, in the Persian War, tells a story of how Croesus, the richest and most-favored king of his time, asked Solon the Athenian a leading question. He would not have asked it if he had not been worried about the answer. “Who,” he asked, “is the luckiest person in the world?” He must have been eaten with doubt and hungry for reassurance. Solon told him of three lucky people in old times. And Croesus more than likely did not listen, so anxious was he about himself. And when Solon did not mention him, Croesus was forced to say, “Do you not consider me lucky?”

Solon did not hesitate in his answer. “How can I tell?” he said. “You aren’t dead yet.”

And this answer must have haunted Croesus dismally as his luck disappeared, and his wealth and his kingdom. And as he was being burned on a tall fire, he may have thought of it and perhaps wished he had not asked or not been answered.

And in our time, when a man dies—if he has had wealth and influence and power and all the vestments that arouse envy, and after the living take stock of the dead man’s property and his eminence and works and monuments—the question is still there: Was his life good or was it evil?—which is another way of putting Croesus’s question. Envies are gone, and the measuring stick is: “Was he loved or was he hated? Is his death felt as a loss or does a kind of joy come of it?”

I remember clearly the deaths of three men. One was the richest man of the century, who, having clawed his way to wealth through the souls and bodies of men, spent many years trying to buy back the love he had forfeited and by that process performed great service to the world and, perhaps, had much more than balanced the evils of his rise. I was on a ship when he died. The news was posted on the bulletin board, and nearly everyone received the news with pleasure. Several said, “Thank God that son of a bitch is dead.”

Then there was a man, smart as Satan, who, lacking some perception of human dignity and knowing all too well every aspect Of human weakness and wickedness, used his special knowledge to warp men, to buy men, to bribe and threaten and seduce until he found himself in a position of great power. He clothed his motives in the names of virtue, and I have wondered whether he ever knew that no gift will ever buy back a man’s love when you have removed his self love. A bribed man can only hate his briber. When this man died the nation rang with praise and, just beneath, with gladness that he was dead.

There was a third man, who perhaps made many errors in performance but whose effective life was devoted to making men brave and dignified and good in a time when they were poor and frightened and when ugly forces were loose in the world to utilize their fears. This man was hated by the few. When he died the people burst into tears in the streets and their minds wailed, “What can we do now? How can we go on without him?”

In uncertainty I am certain that underneath their topmost layers of frailty men want to be good and want to be loved. Indeed, most of their vices are attempted short cuts to love. When a man comes to die, no matter what his talents and influence and genius, if he dies unloved his life must be a failure to him and his dying a cold horror.

It seems to me that if you or I must choose between two courses of thought or action, we should remember our dying and try so to live that our death brings no pleasure to the world.

We have only one story. All novels, all poetry, are built on the never-ending contest in ourselves of good and evil. And it occurs to me that evil must constantly respawn, while good, while virtue, is immortal. Vice has always a new fresh young face, while virtue is venerable as nothing else in the world is.

From: East of Eden