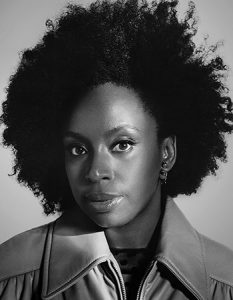 “Power is the ability not just to tell the story of another person, but to make it the definitive story of that person.”

‘It is impossible to talk about the single story without talking about power,’ asserts author and essayist Chimamanda Ngozi Adichie in this extract from her TED talk from 2009 called The Danger of the Single Story. She argues that which stories get to be told and how they are told essentially depends on who is telling them, and that the privilege of storytelling usually lies with the person with power. In a pluralistic and diverse society, it’s important that storytellers from every perspective be heard, in order to reflect the truth of that society and its multi-faceted nature. It’s not easy, admits Adichie, to ensure that we always keep searching beyond the single story, but expanding the scope of our narrative horizons is a virtuous imperative to commit ourselves to. This passage is interesting to compare with John Steinbeck’s view of the single story of humanity, when he asserts in East of Eden that there is in fact just one story, and that is of the struggle between good and evil.

This single story of Africa ultimately comes, I think, from Western literature. Now, here is a quote from the writing of a London merchant called John Locke, who sailed to West Africa in 1561 and kept a fascinating account of his voyage. After referring to the black Africans as “beasts who have no houses,” he writes, “They are also people without heads, having their mouth and eyes in their breasts.”

Now, I’ve laughed every time I’ve read this. And one must admire the imagination of John Locke. But what is important about his writing is that it represents the beginning of a tradition of telling African stories in the West: a tradition of Sub-Saharan Africa as a place of negatives, of difference, of darkness, of people who, in the words of the wonderful poet Rudyard Kipling, are “half devil, half child.”

This single story of Africa ultimately comes, I think, from Western literature.

And so I began to realize that my American roommate must have throughout her life seen and heard different versions of this single story, as had a professor, who once told me that my novel was not “authentically African.” Now, I was quite willing to contend that there were a number of things wrong with the novel, that it had failed in a number of places, but I had not quite imagined that it had failed at achieving something called African authenticity. In fact I did not know what African authenticity was. The professor told me that my characters were too much like him, an educated and middle-class man. My characters drove cars. They were not starving. Therefore they were not authentically African.

But I must quickly add that I too am just as guilty in the question of the single story. A few years ago, I visited Mexico from the US. The political climate in the US at the time was tense, and there were debates going on about immigration. And, as often happens in America, immigration became synonymous with Mexicans. There were endless stories of Mexicans as people who were fleecing the health-care system, sneaking across the border, being arrested at the border, that sort of thing.

Like our economic and political worlds, stories too are defined by the principle of nkali: How they are told, who tells them, when they’re told, how many stories are told, are really dependent on power.

I remember walking around on my first day in Guadalajara, watching the people going to work, rolling up tortillas in the marketplace, smoking, laughing. I remember first feeling slight surprise. And then I was overwhelmed with shame. I realized that I had been so immersed in the media coverage of Mexicans that they had become one thing in my mind, the abject immigrant. I had bought into the single story of Mexicans and I could not have been more ashamed of myself. So that is how to create a single story, show a people as one thing, as only one thing, over and over again, and that is what they become.

It is impossible to talk about the single story without talking about power. There is a word, an Igbo word that I think about whenever I think about the power structures of the world, and it is “nkali.” It’s a noun that loosely translates to “to be greater than another.” Like our economic and political worlds, stories too are defined by the principle of nkali: How they are told, who tells them, when they’re told, how many stories are told, are really dependent on power.

The Palestinian poet Mourid Barghouti writes that if you want to dispossess a people, the simplest way to do it is to tell their story and to start with, “secondly.”

Power is the ability not just to tell the story of another person, but to make it the definitive story of that person. The Palestinian poet Mourid Barghouti writes that if you want to dispossess a people, the simplest way to do it is to tell their story and to start with, “secondly.” Start the story with the arrows of the Native Americans, and not with the arrival of the British, and you have an entirely different story. Start the story with the failure of the African state, and not with the colonial creation of the African state, and you have an entirely different story.

I recently spoke at a university where a student told me that it was such a shame that Nigerian men were physical abusers like the father character in my novel. I told him that I had just read a novel called American Psycho—and that it was such a shame that young Americans were serial murderers. Now, obviously I said this in a fit of mild irritation. But it would never have occurred to me to think that just because I had read a novel in which a character was a serial killer that he was somehow representative of all Americans. This is not because I am a better person than that student, but because of America’s cultural and economic power, I had many stories of America. I had read Tyler and Updike and Steinbeck and Gaitskill. I did not have a single story of America.

From: The Danger of the Single Story