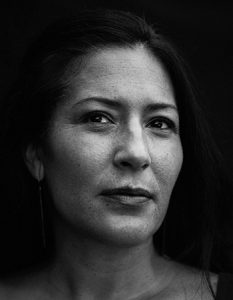 Wife, why does it
sound like a job? “I need a wife” the famous
feminist wrote, “a wife that will keep my
clothes clean, ironed, mended, replaced
if need be.”

In an interview with Guernica Magazine, Ada Limón formulated the following ground of her work: “I think that the main question that I’m always asking is: how do we live in the world?” Her poem, Wife, examines the secret pitfalls of marriage from a woman’s perspective; poignantly, from the point of view of a newlywed, of someone entering unchartered territory that has been laid out and defined for her by the generations that preceded her. Influenced by poets Joy Harjo and Lucille Clifton, among others, Ada Limón’s poetry is an ongoing engagement with truth and vulnerability.

I’m not yet comfortable with the word,
its short clean woosh that sounds like
life. At dinner last night my single girls
said in admonition, “It’s not wife-approved”
about a friend’s upcoming trip. Their
eyes rolled up and over and out their
pretty young heads. Wife, why does it
sound like a job? “I need a wife” the famous
feminist wrote, “a wife that will keep my
clothes clean, ironed, mended, replaced
if need be.” A word that could be made
easily into maid. A wife that does, fixes
soothes, honors, obeys, Housewife,
fishwife, bad wife, good wife, what’s
the word for someone who stares long
into the morning, unable to even fix tea
some days, the kettle steaming over
loud like a train whistle, she who cries
in the mornings, she who tears a hole
in the earth and cannot stop grieving,
the one who wants to love you, but often
isn’t good at even that, the one who
doesn’t want to be diminished
by how much she wants to be yours.