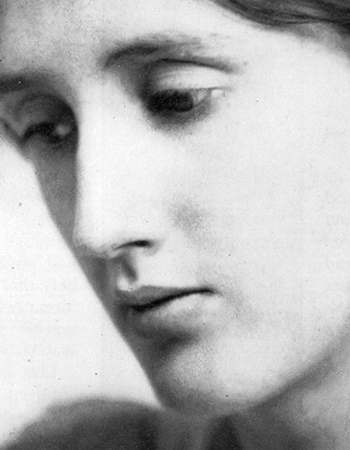 “What is the meaning of life? That was all—a simple question; one that tended to close in on one with years. The great revelation had never come. The great revelation perhaps never did come. Instead there were little daily miracles, illuminations, matches struck unexpectedly in the dark.”

This gorgeous passage from Virginia Woolf’s novel To The Lighthouse is narrated by the character Lily Briscoe, who is a painter. Briscoe’s persona synthesizes the masculine and feminine principles according to Virginia Woolf – male rationality with the female poetic and emotional nature. In this excerpt, which is written in Woolf’s signature stream of consciousness style, Briscoe reflects on the mysterious process of creativity, ‘this formidable ancient enemy of hers’ that draws her out of the stream of the world into the presence of another truth that ’emerged stark at the back of appearances.’ She reflects on her own compulsion to paint and observe rather than to engage with the people around her and builds to a final realization that an artwork seeks to somehow make stability from what is always passing and in flux, to make ‘life stand still here.’ For more Virginia Woolf on The Dewdrop, read an extract from A Room of One’s Own and her short story, The Death of the Moth.

The brush descended. It flickered brown over the white canvas; it left a running mark. A second time she did it—a third time. And so pausing and so flickering, she attained a dancing rhythmical movement, as if the pauses were one part of the rhythm and the strokes another, and all were related; and so, lightly and swiftly pausing, striking, she scored her canvas with brown running nervous lines which had no sooner settled there than they enclosed (she felt it looming out at her) a space. Down in the hollow of one wave she saw the next wave towering higher and higher above her. For what could be more formidable than that space? Here she was again, she thought, stepping back to look at it, drawn out of gossip, out of living, out of community with people into the presence of this formidable ancient enemy of hers—this other thing, this truth, this reality, which suddenly laid hands on her, emerged stark at the back of appearances and commanded her attention. She was half unwilling, half reluctant. Why always be drawn out and haled away?

“Always before she exchanged the fluidity of life for the concentration of painting she had a few moments of nakedness when she seemed like an unborn soul, a soul reft of body, hesitating on some windy pinnacle and exposed without protection to all the blasts of doubt.”

Why not left in peace, to talk to Mr. Carmichael on the lawn? It was an exacting form of intercourse anyhow. Other worshipful objects were content with worship; men, women, God, all let one kneel prostrate; but this form, were it only the shape of a white lamp-shade looming on a wicker table, roused one to perpetual combat, challenged one to a fight in which one was bound to be worsted. Always (it was in her nature, or in her sex, she did not know which) before she exchanged the fluidity of life for the concentration of painting she had a few moments of nakedness when she seemed like an unborn soul, a soul reft of body, hesitating on some windy pinnacle and exposed without protection to all the blasts of doubt. Why then did she do it? She looked at the canvas, lightly scored with running lines. It would be hung in the servants’ bedrooms. It would be rolled up and stuffed under a sofa. What was the good of doing it then, and she heard some voice saying she couldn’t paint, saying she couldn’t create, as if she were caught up in one of those habitual currents in which after a certain time experience forms in the mind, so that one repeats words without being aware any longer who originally spoke them.

Can’t paint, can’t write, she murmured monotonously, anxiously considering what her plan of attack should be. For the mass loomed before her; it protruded; she felt it pressing on her eyeballs. Then, as if some juice necessary for the lubrication of her faculties were spontaneously squirted, she began precariously dipping among the blues and umbers, moving her brush hither and thither, but it was now heavier and went slower, as if it had fallen in with some rhythm which was dictated to her (she kept looking at the hedge, at the canvas) by what she saw, so that while her hand quivered with life, this rhythm was strong enough to bear her along, with it on its current. Certainly she was losing consciousness of outer things. And as she lost consciousness of outer things, and her name and her personality and her appearance, and whether Mr. Carmichael was there or not, her mind kept throwing up from its depths, scenes, and names, and sayings, and memories and ideas, like a fountain spurting over that glaring, hideously difficult white space, while she modelled it with greens and blues.

Charles Tansley used to say that, she remembered, women can’t paint, can’t write. Coming up behind her, he had stood close beside her, a thing she hated, as she painted here on this very spot. “Shag tobacco,” he said, “fivepence an ounce,” parading his poverty, his principles. (But the war had drawn the sting of her femininity. Poor devils, one thought, poor devils, of both sexes.) He was always carrying a book about under his arm—a purple book. He “worked.” He sat, she remembered, working in a blaze of sun. At dinner he would sit right in the middle of the view. But after all, she reflected, there was the scene on the beach. One must remember that. It was a windy morning. They had all gone down to the beach. Mrs. Ramsay sat down and wrote letters by a rock.

“In the midst of chaos there was shape; this eternal passing and flowing (she looked at the clouds going and the leaves shaking) was struck into stability. Life stand still here, Mrs. Ramsay said.“

She wrote and wrote. “Oh,” she said, looking up at something floating in the sea, “is it a lobster pot? Is it an upturned boat?” She was so short-sighted that she could not see, and then Charles Tansley became as nice as he could possibly be. He began playing ducks and drakes. They chose little flat black stones and sent them skipping over the waves. Every now and then Mrs. Ramsay looked up over her spectacles and laughed at them. What they said she could not remember, but only she and Charles throwing stones and getting on very well all of a sudden and Mrs. Ramsay watching them. She was highly conscious of that. Mrs. Ramsay, she thought, stepping back and screwing up her eyes. (It must have altered the design a good deal when she was sitting on the step with James. There must have been a shadow.) When she thought of herself and Charles throwing ducks and drakes and of the whole scene on the beach, it seemed to depend somehow upon Mrs. Ramsay sitting under the rock, with a pad on her knee, writing letters. (She wrote innumerable letters, and sometimes the wind took them and she and Charles just saved a page from the sea.) But what a power was in the human soul! she thought. That woman sitting there writing under the rock resolved everything into simplicity; made these angers, irritations fall off like old rags; she brought together this and that and then this, and so made out of that miserable silliness and spite (she and Charles squabbling, sparring, had been silly and spiteful) something—this scene on the beach for example, this moment of friendship and liking—which survived, after all these years complete, so that she dipped into it to re-fashion her memory of him, and there it stayed in the mind affecting one almost like a work of art.

“Like a work of art,” she repeated, looking from her canvas to the drawingroom steps and back again. She must rest for a moment. And, resting, looking from one to the other vaguely, the old question which traversed the sky of the soul perpetually, the vast, the general question which was apt to particularise itself at such moments as these, when she released faculties that had been on the strain, stood over her, paused over her, darkened over her. What is the meaning of life? That was all—a simple question; one that tended to close in on one with years. The great revelation had never come. The great revelation perhaps never did come. Instead there were little daily miracles, illuminations, matches struck unexpectedly in the dark; here was one. This, that, and the other; herself and Charles Tansley and the breaking wave; Mrs. Ramsay bringing them together; Mrs. Ramsay saying, “Life stand still here”; Mrs. Ramsay making of the moment something permanent (as in another sphere Lily herself tried to make of the moment something permanent)—this was of the nature of a revelation. In the midst of chaos there was shape; this eternal passing and flowing (she looked at the clouds going and the leaves shaking) was struck into stability. Life stand still here, Mrs. Ramsay said. “Mrs. Ramsay! Mrs. Ramsay!” she repeated. She owed it all to her.