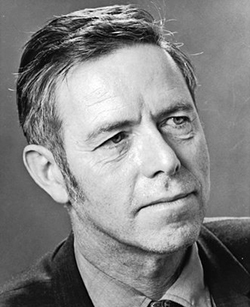 Among Alan Watts’ most compelling qualities was his fascination with different systems  of faith and his ability to draw comparisons and lines of equivocation between them in a way that they would further illuminate each other. He stressed the importance of looking at the experience of religion rather than the schema of a doctrine, writing in his book Become What You Are: “Christians believe in a personal God and Buddhists do not, but as regards the true essentials of religion this difference is as superficial as the fact that every French noun has a gender, whereas this is not so in English.” In the passage that follows, he takes what he considers to be one of the simplest established descriptions of God, that of the Vedanta Brahman, in order to try and demonstrate the all-encompassing, universal nature of the experience of an ultimate being.

What, then, is a truly deep feeling of salvation? Insofar as this question can be answered at all, perhaps it is best to consider one of the greatest doctrines in all religion in terms of a state of mind. For this purpose the best choice is probably the Hindu or Vedanta conception of Brahman, because this is at once the simplest and the most subtle of doctrines—subtle just because it is so simple. The same doctrine is found in other systems, but Vedanta gives it the best philosophical expression. It is that all possible things, events, thoughts, and qualities are aspects of a single Reality, which is sometimes called the Self of the universe. In themselves these many aspects have no reality; they are real only in that each one of them is a manifestation of Brahman or the Self. To put it in another way, the true self of any given thing is Brahman and not something that belongs exclusively to the thing in question. Each individual is therefore an aspect of Brahman, and no two aspects are the same. But man’s self is much more than what he considers to be his ego, his personality called John Smith or William Jones. The ego is a device or trick (maya) employed so that Brahman may manifest itself, and man’s innermost self is therefore identical with the Self of all things. Thus if anyone wants to know what Brahman is he has just to look around, to think, to act, to be aware, to live, for all that is known by the senses, thought in the mind, or felt in the heart is Brahman.

In other systems of thought Brahman has many other names—”Tao” in Chinese, and mystics the world over find similar meaning in the words “God,” “Allah,” “Infinite Life,” “élan vital,” “the Absolute,” or whatever other term may be used. In fact, the intuition of the One Reality is the essence of all mystical religion, but few people understand clearly what it is to feel this intuition in oneself. We are perhaps more apt to think of this idea just as a metaphysical speculation, a more or less reasonable theory about the fundamental structure of life. Someday, we think, it might be possible for us to delve down into the deepest recesses of our souls, lay our fingers on this mysterious universal essence and avail ourselves of its tremendous powers. This, however, does not seem quite the right way to look at it. For one thing, it is not to be found only “in the deepest recesses of our souls,” and for another, the word “essence” makes it sound as if it were a highly refined, somewhat gaseous or electric and wholly formless potency that somehow dwells “inside” things. But in relation to Brahman there is neither inside nor outside; sometimes it is called the principle of “nonduality” because nothing else exists beside it and nothing is excluded from it. It is to be found on the surface as much as in the depths and in the finite as much as in the infinite, for it has wisely been said that “there is nothing infinite apart from finite things.” Thus it can neither be lost nor found and you cannot avail yourself of its powers any more than you can dispense with them, for all these conceptions of having and not having, of gain and loss, finite and infinite, belong to the principle of duality. Every dualism is exclusive; it is this and not that, that and not this. But Brahman as the One Reality is all-inclusive, for the Upanishads say:

From: Become What You Are

1 thought on “Brahman, God, Allah and the Tao – Alan Watts”