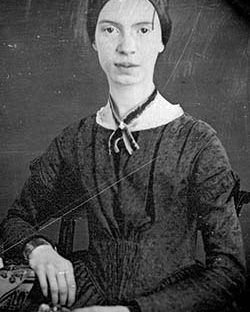 The term between eternity and immortality – our lives – is the subject of Emily Dickinson’s poem number 721. It’s a gentle vision of life melting and disappearing into a drift and the being itself a ‘miracle’ as she refers to it in the last verse. She also uses the image of the moon reflected in the water surrounded by darkness, a cool image of eternal wisdom.

Behind Me – dips Eternity –
Before Me – Immortality –
Myself – the Term between –
Death but the Drift of Eastern Gray,
Dissolving into Dawn away,
Before the West begin –

From: The Complete Poems of Emily Dickinson

1 thought on “Behind Me – dips Eternity – Emily Dickinson”