“The first time we practiced meditation, Michael (Jordan) thought I was joking. Midway through the session, he cocked one eye open and and took a glance around the room to see if any of his teammates were actually doing it. To his surprise, many of them were.” 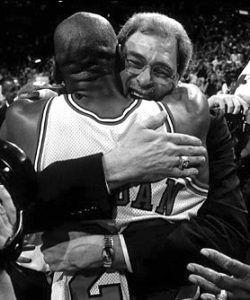 ‘Selflessness is the soul of teamwork’ was former basketball coach Phil Jackson’s mantra when coaching his players in the Chicago Bulls and the Los Angeles Lakers. In an interview with What is Enlightenment? magazine back in 2004, he said, ‘When you stop the basketball, when it resides in your presence and you hold it for longer than two counts, you’ve destroyed our rhythm.’ Jackson coached his players along the lines of wisdom he had gleaned from his own study of Zen Buddhism and the Lakota Sioux, emphasizing group consciousness and non-ego. This excerpt from his memoir Sacred Hoops talks about his experiences with one of his star players, Michael Jordan, and the very special qualities of mind that made him such an outstanding player.

The first time we practiced meditation, Michael thought I was joking. Midway through the session, he cocked one eye open and and took a glance around the room to see if any of his teammates were actually doing it. To his surprise, many of them were.

Michael has always maintained that he didn’t need any of “that Zen stuff’ because he already had a positive outlook life. Who am I to argue? In the process of becoming a great athlete, Michael had attained a quality of mind few Zen students ever achieve. His ability to stay relaxed and intensely focused the midst of chaos is unsurpassed. He loves being in the center of a storm. While everyone else is spinning madly out of control he moves effortlessly across the floor, enveloped by a great stillness.

Jordan doesn’t practice regularly, but he often calls up images of past successes in his mind during high-pressure situations. More often than not, he’ll replay the last-second shot he took to win the 1982 NCAA championship as a freshman at North Carolina. Rather than cloud his mind with negative thoughts, he says to himself, “Okay, I’ve been here before,” then tries to relax enough to let something positive emerge.

“In the process of becoming a great athlete, Michael had attained a quality of mind few Zen students ever achieve.”

Jordan doesn’t believe in trying to visualize the shot in specific detail. “I know what I want the outcome to be,” he says, “but I don’t try to see myself doing it beforehand. In 1982, I knew I wanted to make that shot. I didn’t know where I was going to shoot it or what kind of shot I was going to take. I just believed I could do it, and I did.”

Jordan’s thought process in the last seconds of Game 6 in the 1993 NBA finals is typical. We were behind by 6 points, and the crowd in Phoenix was going berserk. If we lost, it meant we would have to play the seventh game in the Suns’ arena—not a happy prospect. When I called a timeout to set up a play, the other players were tense and unfocused, but Michael was remarkably composed. “I could hear all the noise,” he recalls, “but I was thinking, ‘No matter what happens, this is only Game Six. We’ve still got Game Seven.’ I didn’t get caught up in the surrounding rigmarole. I focused on, ‘Okay, we’ve still got a chance to win this game. All we’ve got to do is get some kind of roll going, and I’m the one to do that.’ My focus was right there at that particular moment. But even then I was thinking that Game Seven was a possibility. So I had a cushion.” Jordan emerged from the huddle and ignited the surge with a driving layup and a critical rebound that helped us to win the game – and the championship.

From – Sacred Hoops: Spiritual Lessons of a Hardwood Warrior

1 thought on “Phil Jackson and the Zen of Basketball”