“Where water does not collect, the moon does not dwell.” 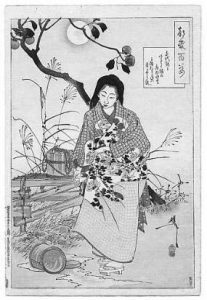 Adachi Chiyono (also known as Mugai Nyodai) was the daughter of a samurai warrior in the 13th century who became the first woman – and mother – to found and head a Zen monastery in Japan. Her enlightenment poem invokes the catastrophe of a broken bucket; with the vessel ruptured, there is no place to hold water, and with no water, there are no more reflections.

With this and that

I tried to keep the bucket together,

and then the bottom fell out.

Where water does not collect,

the moon does not dwell.