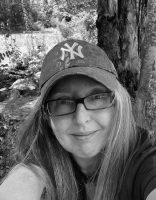 The introduction to this poem Why, Miró is written by the poet herself, who eloquently describes the experience that inspired her to write about the artist Joan Miró.

“When poet Elaine Equi assigned the task of writing a poem that asked and answered a question, I was caught up short and struggled until I happened on a Joan Miró exhibit at the Museum of Modern Art in New York City. I had always loved Miró’s whimsical, poetic art, including the titles he gave his paintings, but this time I had one of those I and Thou experiences, in which the work seems to enter and change me for life. As I walked from painting to painting from the early more realistic, homey still-life and farm scenes to the darker paintings from the 1930s and 1940s as well as the magical Constellations, I was mesmerized by Miró’s ability to metamorphose the external world into something wholly his own, something human and not. As I read more about him, including what he wrote in I Paint Like a Gardener, I discovered that during the blackouts of World War II, when no one was allowed to go out to look at the trees, moon, and stars, Miró painted his Constellations on paper inside blued or blacked out shaded windows. That the painter could bring the cosmos he so longed for inside of him was a revelation to me. In any case, I am indebted to the wonderful poet and teacher Elaine Equi for her prompt and also her encouragement.”

Am I scavenging your work
for my own happiness

Clamber up the escape ladder
to your quirky constellations

I might light up the blackout
moments of my days

You took homo sapiens apart
and cut them down to size 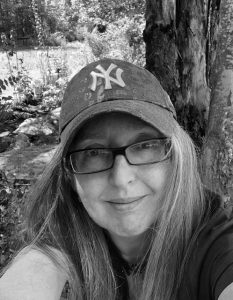 Joan Lauri Poole lives in New York City with a black poodle named Oliver and the poet John Couturier. She studies and practices qigong and the yang form of tai chi.  Her poems recently appeared in Third Wednesday and Parks and Points 2020. Generous portions of her first book, Bed of Crimson Joy, were published in the anthology This Full Green Hour and in online and print magazines, including ducts.org, Shenandoah, Mississippi Review, New York Quarterly, and Brooklyn Review,She is at work on a new poetry collection.