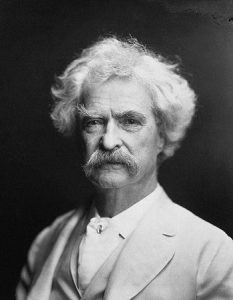 “I was a trembling, because I’d got to decide, forever, betwixt two things, and I knowed it.”

Mark Twain’s Huckleberry Finn is one of the most controversial books in the American literary canon, having sparked much debate about its engagement with race and use of language. When it was first published in 1885, the majority of the criticism the book met with had to do with the perceived vulgarity of its language, which was the result of Twain’s efforts to portray lower-class peoples in his work. More recently, the book has been praised for its portrayal of the horror of 19th century racism, and then strongly condemned for failing to rise above existing racial stereotypes. Huckleberry Finn could be an impetus for 21st century introspection derived from 19th century horror, with many questions and issues crystallized in this passage from the chapter ‘You can’t pray a lie’. In it, Twain illustrates with intensity Huck’s interior monologue and conflict between what he perceives as moral correctness and his own love and friendship with Jim. The scene suggests that evil is not something manifested by wicked people, rather it perpetuates with the conventions that we absorb from childhood. In the end, a boy decides; Huck acts on the reading of his inner compass. In sincerity he concludes, ‘you can’t pray a lie’, and that he will follow the truth of his heart, even if it condemns him to hell.

* Given current popular interpretations of the n-word, it has been replaced with ‘black man’.

I went to the raft, and set down in the wigwam to think. But I couldn’t come to nothing. I thought till I wore my head sore, but I couldn’t see no way out of the trouble. After all this long journey, and after all we’d done for them scoundrels, here it was all come to nothing, everything all busted up and ruined, because they could have the heart to serve Jim such a trick as that, and make him a slave again all his life, and amongst strangers, too, for forty dirty dollars.

Once I said to myself it would be a thousand times better for Jim to be a slave at home where his family was, as long as he’d got to be a slave, and so I’d better write a letter to Tom Sawyer and tell him to tell Miss Watson where he was. But I soon give up that notion for two things: she’d be mad and disgusted at his rascality and ungratefulness for leaving her, and so she’d sell him straight down the river again; and if she didn’t, everybody naturally despises an ungrateful black man, and they’d make Jim feel it all the time, and so he’d feel ornery and disgraced. And then think of me! It would get all around that Huck Finn helped a black man to get his freedom; and if I was ever to see anybody from that town again I’d be ready to get down and lick his boots for shame.

That’s just the way: a person does a lowdown thing, and then he don’t want to take no consequences of it. Thinks as long as he can hide, it ain’t no disgrace. That was my fix exactly. The more I studied about this the more my conscience went to grinding me, and the more wicked and low-down and ornery I got to feeling. And at last, when it hit me all of a sudden that here was the plain hand of Providence slapping me in the face and letting me know my wickedness was being watched all the time from up there in heaven, whilst I was stealing a poor old woman’s BLACK MAN that hadn’t ever done me no harm, and now was showing me there’s One that’s always on the lookout, and ain’t a-going to allow no such miserable doings to go only just so fur and no further, I most dropped in my tracks I was so scared. Well, I tried the best I could to kinder soften it up somehow for myself by saying I was brung up wicked, and so I warn’t so much to blame; but something inside of me kept saying, “There was the Sunday-school, you could a gone to it; and if you’d a done it they’d a learnt you there that people that acts as I’d been acting about that black man goes to everlasting fire.”

It made me shiver. And I about made up my mind to pray, and see if I couldn’t try to quit being the kind of a boy I was and be better. So I kneeled down. But the words wouldn’t come. Why wouldn’t they? It warn’t no use to try and hide it from Him. Nor from me, neither. I knowed very well why they wouldn’t come. It was because my heart warn’t right; it was because I warn’t square; it was because I was playing double. I was letting on to give up sin, but away inside of me I was holding on to the biggest one of all. I was trying to make my mouth say I would do the right thing and the clean thing, and go and write to that black man’s owner and tell where he was; but deep down in me I knowed it was a lie, and He knowed it. You can’t pray a lie—I found that out.

So I was full of trouble, full as I could be; and didn’t know what to do. At last I had an idea; and I says, I’ll go and write the letter—and then see if I can pray. Why, it was astonishing, the way I felt as light as a feather right straight off, and my troubles all gone. So I got a piece of paper and a pencil, all glad and excited, and set down and wrote:

Miss Watson, your runaway black man Jim is down here two mile below Pikesville, and Mr. Phelps has got him and he will give him up for the reward if you send.
HUCK FINN.

I felt good and all washed clean of sin for the first time I had ever felt so in my life, and I knowed I could pray now. But I didn’t do it straight off, but laid the paper down and set there thinking—thinking how good it was all this happened so, and how near I come to being lost and going to hell. And went on thinking. And got to thinking over our trip down the river; and I see Jim before me all the time: in the day and in the night-time, sometimes moonlight, sometimes storms, and we a-floating along, talking and singing and laughing. But somehow I couldn’t seem to strike no places to harden me against him, but only the other kind. I’d see him standing my watch on top of his’n, ‘stead of calling me, so I could go on sleeping; and see him how glad he was when I come back out of the fog; and when I come to him again in the swamp, up there where the feud was; and such-like times; and would always call me honey, and pet me and do everything he could think of for me, and how good he always was; and at last I struck the time I saved him by telling the men we had small-pox aboard, and he was so grateful, and said I was the best friend old Jim ever had in the world, and the only one he’s got now; and then I happened to look around and see that paper.

It was a close place. I took it up, and held it in my hand. I was a trembling, because I’d got to decide, forever, betwixt two things, and I knowed it. I studied a minute, sort of holding my breath, and then says to myself: “All right, then, I’ll go to hell”—and tore it up. It was awful thoughts and awful words, but they was said. And I let them stay said; and never thought no more about reforming. I shoved the whole thing out of my head, and said I would take up wickedness again, which was in my line, being brung up to it, and the other warn’t. And for a starter I would go to work and steal Jim out of slavery again; and if I could think up anything worse, I would do that, too; because as long as I was in, and in for good, I might as well go the whole hog.