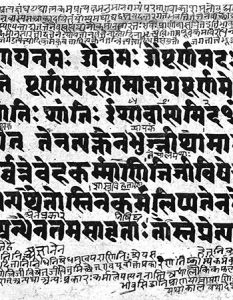 The Upanishads are a series of philosophical texts expounding the fundamental tenets of the Hindu spiritual tradition that date back approximately 2,500 years. The word ‘Upanishad’ means to sit down closely, as one would to one’s spiritual teacher, and it also contains the nuance of the revelation of an underlying truth. The Isha Upanishad is one of the shortest of the canon and is concerned with the non-duality of the Self and the role of action in tune with dharma in one’s life. Mahatma Gandhi famously once said of the Isha Upanishad: “”If all the Upanishads and all the other scriptures happened all of a sudden to be reduced to ashes, and if only the first verse in the Ishopanishad were left in the memory of the Hindus, Hinduism would live for ever.”

The Lord is enshrined in the hearts of all.
The Lord is the supreme Reality.
Rejoice in him through renunciation.
Covet nothing. All belongs to the Lord.

Thus working may you live a hundred years.
Thus alone will you work in real freedom.

Those who deny the Self are born again
Blind to the Self, enveloped in darkness,
Utterly devoid of love for the Lord.

The Self is one. Ever still, the Self is
Swifter than thought, swifter than the senses.
Though motionless, he outruns all pursuit.
Without the Self, never could life exist.

The Self seems to move, but is ever still.
He seems far away, but is ever near.
He is within all, and he transcends all.

The Self is everywhere. Bright is the Self,
Indivisible, untouched by sin, wise,
Immanent and transcendent.
He it is Who holds the cosmos together.

In dark night live those for whom
The world without alone is real; in night
Darker still, for whom the world within
Alone is real. The first leads to a life
Of action, the second to a life of meditation.
But those who combine action with meditation
Cross the sea of death through action
And enter into immortality
Through the practice of meditation.
So have we heard from the wise.

The face of truth is hidden by your orb
Of gold, O sun. May you remove your orb
So that I, who adore the true, may see
The glory of truth. O nourishing sun,
Solitary traveler, controller,
Source of life for all creatures, spread your light
And subdue your dazzling splendor
So that I may see your blessed Self.
Even that very Self am I!

May my life merge in the Immortal
When my body is reduced to ashes.
O mind, meditate on the eternal Brahman.
Remember the deeds of the past.
Remember, O mind, remember.

O god of fire, lead us by the good path
To eternal joy. You know all our deeds.
Deliver us from evil, we who bow
And pray again and again.

Translation from: The Upanishads by Eknath Easwaran