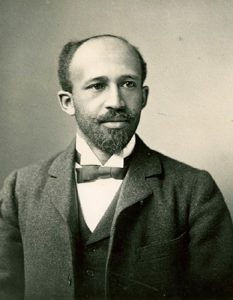 “It is a peculiar sensation, this double-consciousness, this sense of always looking at one’s self through the eyes of others, of measuring one’s soul by the tape of a world that looks on in amused contempt and pity.”

More than a century ago, the writer, historian, sociologist and civil rights activist W. E. B. Du Bois wrote about the unasked question that followed him wherever he went and was cast into all manner of polite variations on the central, unutterable query: how does it feel to be a problem? Du Bois was born into a mostly integrated  and mostly white community in Massachusetts in 1868 and spent his life in scholarship and advancing the cause of civil rights. This extract from an essay called Strivings of the Negro People written in 1897, begins to describe inequality and the experience of difference and division, a two-ness of being both black and American, two identities not easily reconciled. The essay was eventually included in a collection called The Souls of Black Folk, which is considered to be a classic of American literature.

Between me and the other world there is ever an unasked question: unasked by some through feelings of delicacy; by others through the difficulty of rightly framing it. All, nevertheless, flutter round it. They approach me in a half-hesitant sort of way, eye me curiously or compassionately, and then, instead of saying directly, How does it feel to be a problem? they say, I know an excellent colored man in my town; or, I fought at Mechanicsville; or, Do not these Southern outrages make your blood boil? At these I smile, or am interested, or reduce the boiling to a simmer, as the occasion may require. To the real question, How does it feel to be a problem? I answer seldom a word.

And yet, being a problem is a strange experience, peculiar even for one who has never been anything else, save perhaps in babyhood and in Europe. It is in the early days of rollicking boyhood that the revelation first bursts upon one, all in a day, as it were. I remember well when the shadow swept across me. I was a little thing, away up in the hills of New England, where the dark Housatonic winds between Hoosac and Taghanic to the sea. In a wee wooden schoolhouse, something put it into the boys’ and girls’ heads to buy gorgeous visiting-cards—ten cents a package—and exchange. The exchange was merry, till one girl, a tall newcomer, refused my card,—refused it peremptorily, with a glance. Then it dawned upon me with a certain suddenness that I was different from the others; or like, mayhap, in heart and life and longing, but shut out from their world by a vast veil. I had thereafter no desire to tear down that veil, to creep through; I held all beyond it in common contempt, and lived above it in a region of blue sky and great wandering shadows. That sky was bluest when I could beat my mates at examination-time, or beat them at a foot-race, or even beat their stringy heads.

“It dawned upon me with a certain suddenness that I was different from the others; or like, mayhap, in heart and life and longing, but shut out from their world by a vast veil.”

Alas, with the years all this fine contempt began to fade; for the world I longed for, and all its dazzling opportunities, were theirs, not mine. But they should not keep these prizes, I said; some, all, I would wrest from them. Just how I would do it I could never decide: by reading law, by healing the sick, by telling the wonderful tales that swam in my head,—some way. With other black boys the strife was not so fiercely sunny: their youth shrunk into tasteless sycophancy, or into silent hatred of the pale world about them and mocking distrust of everything white; or wasted itself in a bitter cry, Why did God make me an outcast and a stranger in mine own house? The “shades of the prison-house” closed round about us all: walls strait and stubborn to the whitest, but relentlessly narrow, tall, and unscalable to sons of night who must plod darkly on in resignation, or beat unavailing palms against the stone, or steadily, half hopelessly watch the streak of blue above.

After the Egyptian and Indian, the Greek and Roman, the Teuton and Mongolian, the Negro is a sort of seventh son, born with a veil, and gifted with second-sight in this American world, a world which yields him no self-consciousness, but only lets him see himself through the revelation of the other world.

One ever feels his two-ness,-an American, a Negro; two souls, two thoughts, two unreconciled strivings; two warring ideals in one dark body, whose dogged strength alone keeps it from being torn asunder.

It is a peculiar sensation, this double-consciousness, this sense of always looking at one’s self through the eyes of others, of measuring one’s soul by the tape of a world that looks on in amused contempt and pity. One ever feels his two-ness,-an American, a Negro; two souls, two thoughts, two unreconciled strivings; two warring ideals in one dark body, whose dogged strength alone keeps it from being torn asunder.

The history of the American Negro is the history of this strife,—this longing to attain self-conscious manhood, to merge his double self into a better and truer self. In this merging he wishes neither of the older selves to be lost. He does not wish to Africanize America, for America has too much to teach the world and Africa; he does not wish to bleach his Negro blood in a flood of white Americanism, for he believes—foolishly, perhaps, but fervently that Negro blood has yet a message for the world. He simply wishes to make it possible for a man to be both a Negro and an American without being cursed and spit upon by his fellows, without losing the opportunity of self-development.