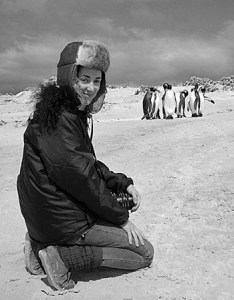 “Here, in the wildest place I had ever known, with only the slightest presence of people, the landscape spoke to me of the turbulent forces of change, the indefatigable action of time that made it impossible to fix on a point for return.”

‘How we became estranged from nature’ is the subheading of Melanie Challenger’s book On Extinction, an exploration into some facets of our planet that are on the verge of being lost forever and an account of her own ‘simple indignation that such odd and unrepeatable beauty would cease to exist.’ The book, which takes as its starting point Challenger’s own ignorance of nature, asks how we can re-associate ourselves with nature and rediscover a similar sense of intimacy with the natural world that was held by our pre-industrial ancestors. In this excerpt, Challenger is writing from Bird Island in the South Atlantic Ocean about the earth’s ‘astounding potential’ as she observes it in that ‘wild land’. What strikes her in this once-tropical, now frozen-over part of the earth, is the immense and constant power of change that is a defining attribute of life.

Bird Island was a trackless and tempestuous landscape, a wild land where natural forces reigned. As I stood on the mull of the hill, the fragile fortifications of the icebergs holding their line against the stormy seas below, my mind turned even further back, to riotous landscapes of prehistoric forests, jungled and unbroken, to times when nature alone transfigured the Earth, not the technologies of humanity. Over 400 million years ago, the early clutch of exotic plants began their lustrous capture of the landscape. The first, monstrous forests emerged from giant horsetails, ferns taller than several men standing on one another’s shoulders, and the simple, olive-green club mosses. After this grew the beautiful cycads and conifers, their nuts and kernels trumpeting their fertility, and giant ferns that sheltered little revolutionary blisters of pollen. These presaged the flowering beauty of our world, such as the exquisite, magnolia-like Archaeanthus linnenbergeri, ninety-eight million years old, with its six generous curls of petals and the dissected hearts of its leaves. And the buzz and dart of insects and birds, their lives strung on the scents and dusts and fruits of these early flowers. No such wildernesses as these exist anywhere in the world today, not even on Bird Island. Our influence is too pervasive. But the Earth’s astounding potential is there, recorded with almost photographic precision in its rocks, soils and ice. From these, we know of times and landscapes absolutely outlandish to our imaginings.

“No such wildernesses as these exist anywhere in the world today, not even on Bird Island. Our influence is too pervasive. But the Earth’s astounding potential is there, recorded with almost photographic precision in its rocks, soils and ice.”

I wanted the albatrosses to survive here on these craggy subantarctic islands. But thinking about the English albatross was unsettling. In my mind, since my childhood, these regions represented the least tamed and mortal places on the Earth, yet the inhospitable conditions – the forbidding cold, the uncultivatable ice and the unstoppable winds – hadn’t existed in earlier times. This austere landscape had its own history of alteration, long-ago ages when exotic plants and creatures thrived, then perished. Like the nineteenth-century geologists who mused over ancient, tropical forests etched into the rocks of their homelands, modern scientists studying in the Antarctic regions have unburied evidence of lush trees and foliage. From its rocks, we know that Antarctica was once part of the supercontinent of Gondwana, until the eternal process of sea-floor spread broke up the giant land mass, lodging Antarctica across the South Pole over sixty million years ago, before the onset of a long-drawn-out phase of cooling. Scientists drilling as deep as a thousand metres into the floor of the Southern Ocean have scrutinized the mud and rocks, glimpsing this summery landscape over fifty million years ago, utterly iceless and habitable, covered in forests and shrubs. The fearful, titanic ice sheets of Antarctica that I had imagined since childhood only grew as the world’s levels of greenhouse gases declined around twenty million years later. The very leafiness and floweriness of the world seemed to have beckoned this ice.

Recently, geologists rooted out six forests from the ceilings of a series of coal mines near Kentucky. Dating from long before the birth of Antarctica, they were some of the first forests to grow on Earth. During the ages when these forests were evolving, the climate altered from one of large ice caps to a green world in which ice was only a memory. The carbon dioxide in the atmosphere surged and plunged throughout the eras, hindering and revitalizing the ice sheets at the poles. There is evidence to suggest that the processes of photosynthesis that took place before land plants evolved didn’t draw enough carbon dioxide from the atmosphere. Carbon dioxide arose naturally from sea surfaces, volcanoes and the respiration of life, but over the millions of years that flowering plants flourished on the Earth, levels gradually lowered and the world’s climate cooled. The shimmering surfaces of the ice sheets formed, slowly establishing the blizzarding climate of Antarctica. I asked myself which was its true nature: the epic ice that affected climates around the world, the flowering continent of earlier eras, or an Earth where Antarctica did not even exist?

“I had been searching for critical moments of closeness to the natural world, junctures to which, perhaps, people might return to mitigate some of the damage to nature in the modern age.”

Some albatrosses have been native to the frosted reaches of the Southern Ocean for tens of thousands of years. The same inventions that gave us insight into the demise of these birds and their wild province also allowed a vision of time and nature from which no easy conclusions could be drawn. These technologies gave a truly humbling breadth of perspective, an awareness of times when the world was utterly different, exposing the arbitrariness of maintaining the status quo.

I had been searching for critical moments of closeness to the natural world, junctures to which, perhaps, people might return to mitigate some of the damage to nature in the modern age. But my thinking was based on naive ideas about what was real and natural and wild. Were there really times when our relationship to the Earth was natural to a lesser or greater extent? Were there times, for that matter, when the world itself had been more or less ‘natural’? I was seeking some essential difference between natural and man-made worlds and the point at which we became severed from nature, but the wildness of Bird Island and the natural processes that had formed the place only confounded my search. The primordial tropics of this terrain subverted any absolute idea of what was natural. Here, in the wildest place I had ever known, with only the slightest presence of people, the landscape spoke to me less of some undisturbed, remote stage of nature to which we might get back, than of the turbulent forces of change, the indefatigable action of time that made it impossible to fix on a point for return.

Melanie Challenger
From – On Extinction: How We Became Estranged From Nature

1 thought on “Extinction and the Turbulent Forces of Change”