These poems by Robert Okaji make up a trio of sketches – as a stone, a window and two halves – that express a fragmented self-portrait.

Neither heart nor vessel nor
glistening nerve, I am the hard one,
renewed, expanding despite all
efforts to remain under. Only
time and the elements move
me. This is pain. Or the
explanation of a sainted
thistle whose yesterday blurs
into today and the future’s
sorrow unfolding. I float in dreams
and speak solely to myself, the
world, its issue, encompassing me.

When you look through me
which darkness illuminates
your vision, outlining the
ghosts of never was and not
yet? Or do your eyes glare
back in silent terror, knowing
the power of liquid made
solid, of light transformed to
electricity and by inference
these words or the shades
drawn by voice command?
Transparent, elusive, evident,
I stand alone, clear, hidden.

No epiphanies in these woods,
no prayers yanked about,
currying favor from the loneliest
god of a fruitless tree, its DNA
unraveling at thought’s speed.
Never having greeted us,
the other world waves goodbye,
and this one turns its back,
both torn in equal measure
yet admitting no guilt through
their narrowed eyes. Oh, to be
whole in this splintered self. 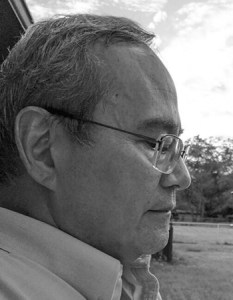 Robert Okaji is a displaced Texan living in Indiana. He holds a BA in history, served without distinction in the U.S. Navy, lived the hand-to-mouth existence of a bookstore owner, worked as a university administrator, and most recently bagged groceries for a living. His work has appeared or is forthcoming in Taos Journal of International Poetry & Art, Glass: A Journal of Poetry, Panoply, High Window, Slippery Elm, North Dakota Quarterly, Vox Populi and elsewhere. Visit his blog, O at the Edges, at http://robertokaji.com.