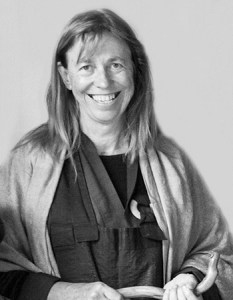 “Zen gives us back a strong taste of that childhood mode of openness, savored now with adult depth, and poignancy. Zazen taken seriously makes it possible to take our selves very, very lightly—that’s its beauty.”

Susan Murphy’s book, The Red Thread, addresses the guts of the flesh-and-blood humans who sustain spiritual practice, not in the empty silence of a monastery, but in the midst of a busy, dirty life of desire, mortality and heartbreak. She asks, how can we live and hold our innate, chaotic humanity, while aspiring to the ideals that a practice like Zen would uphold? In this extract from her book, Murphy talks about the sanguine Zen master Hakuin and the role of humor and laughter in our lives. Walking the line of a serious or sincere practice, she argues, proliferates lightness and a reverence for what she calls the ‘marvelous ordinary.‘

The temple of the ferociously gifted Zen Master Hakuin was situated near Mount Fuji with many poor, hardworking peasants as near neighbors, and Hakuin broke custom to welcome them on equal footing with his monks, if they came to attend talks or chat with him. Many were devotees of Pure Land Buddhism, with a practice of nembutsu—the act of constantly mentally repeating the name of Amida Buddha as the way to ensure rebirth in the radiant Pure Land of no suffering.

An old woman, known in the records simply as “the station lady,” heard Hakuin give teisho (dharma teaching) in which he said, “Your mind is the Pure Land, and your body is Amida Buddha. When Amida Buddha appears, mountains, rivers, forests, and fields all radiate a great light. If you want to understand, look into your own heart.” The old woman took this scandalous suggestion—Amida Buddha; it’s you!—deeply to heart, saying “This is not so hard!” and pondered it day and night as she went about her business. I love the way she bravely plunges in, right in the midst of her endless chores.

One day as she was washing a pot after breakfast, great light shattered her mind. She dropped the pot and ran to meet Hakuin, laughing hard and shouting out, “Amida Buddha filled my whole body! Mountains, rivers, forests and fields are all shining with light. How wonderful!”

“The scouring laughter of Zen sweeps away spiritual clutter and restores us fully to the hazy moon of our mixed, impure human condition.”

“What are you talking about!” Hakuin asked, delighted. “Does the light shine out of your arsehole?”

Small as she was, she gave him a huge push, saying, “Hah! I can see you’re not enlightened yet!” She took his richly coarse and approving testing nudge and more than nudged him back! Then they both fell about laughing, getting enlightened thoroughly together.

The great laughter that erupts from time to time in deeply serious cases in the Zen literature is the merciful abyss into which conceptual thought plummets and vanishes, leaving the infinite life to take over for a revelatory moment or three. In Case 46 of the Book of Serenity, Deshan Yuanming (908-987) addressed his assembly, and said, “Extinguish every conceptual thought, and all Buddhas in the three worlds will be unable to open their mouths (literally, their mouths or tongues will be stuck to the wall).”

He continued, “But there is a person who will give a great laugh. If you can recognize that fellow, you will have accomplished your study.”

“Push yourself hard toward “something special” in your practice, and you’ll find how easily you can mark time for years in an earnest netherworld, a mere facsimile of the real nature of letting go.”

Have you met that person yet, who can do nothing but give the great, generous laugh? The scouring laughter of Zen sweeps away spiritual clutter and restores us fully to the hazy moon of our mixed, impure human condition, right alongside the serious playfulness of the very idea of a practice—that which roams and experiments freely in the open world of birth-and-death.

It’s a kind of childhood mood, this laughter state of mind. You’ve quit the confines of something narrow, offered yourself to ants, water flow, curiosity, the great empty sky. You’ve placed yourself in easy reach of the marvelous ordinary—the wonders of the more ordinary and deeply consoling face of life that begins to appear exactly as we give away resistance. And there’s just pure play left as what we “do.”

Zen gives us back a strong taste of that childhood mode of openness, savored now with adult depth, and poignancy. Zazen taken seriously makes it possible to take our selves very, very lightly—that’s its beauty. Like all play, it’s entirely serious, and therefore entirely approachable with humor and fun. Though there may be giggling, interrupt a children’s game and you’ll quickly learn the high seriousness of play. But push yourself hard toward “something special” in your practice, and you’ll find how easily you can mark time for years in an earnest netherworld, a mere facsimile of the real nature of letting go.

1 thought on “The Great, Generous Laugh”