A new assistant manager at RadioShack discovers that unbridled passion and a work promotion don’t fit well together. 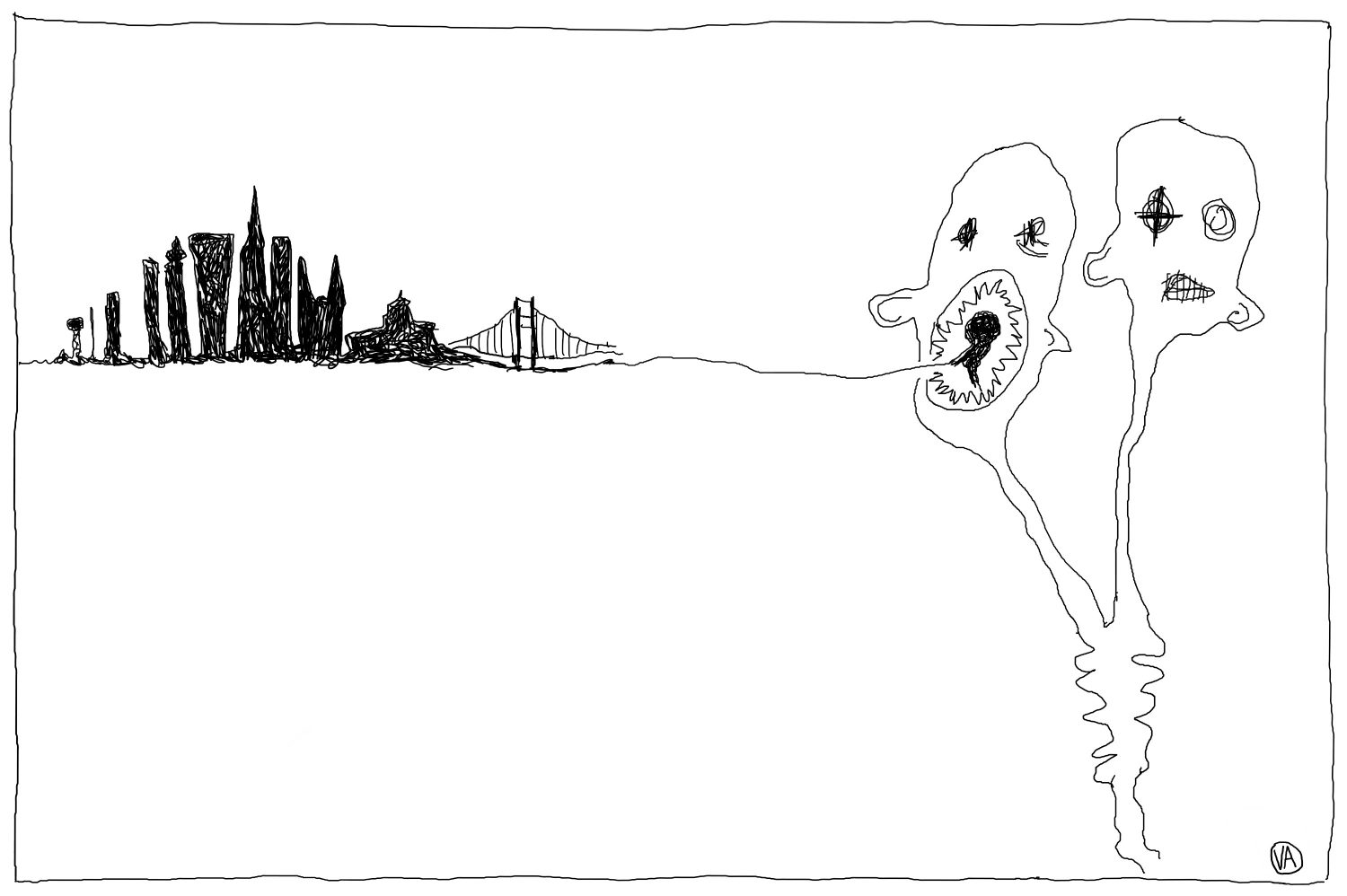 I WAS OBSESSIVELY, WILDLY in love with Bret that weekend. His license was suspended so I did my first city driving on the notoriously difficult-to-navigate streets of San Francisco. He had been kind, finding a hotel with a garage close to the entrance of the city, so I only had to go a short distance before handing my keys over to a valet.

Bret was eleven years older than me and six years divorced. For a while we were just two artists with no obligations or commitments. Our love was driven by booze, music, our passion to create, and our passion to lose ourselves in each other with savage and carnal sex. When we had sex, it left bruises on my knees and thumbprints around both our bodies like a trail of breadcrumbs. It was spontaneous and rough when we wanted it that way, and soft and trembling when we didn’t. Our breathing sped up when we put our hands on each other, and we sank our teeth into each other when we couldn’t stabilize otherwise. I would do anything for him.

That weekend was a wild blur. He taught me how to ride the trains and buses and trolleys all the way across the city and then we bar crawled all the way back to the hotel. We stopped at every corner—stretching our walk home into many hours. Every pub we landed at had a specialty cocktail or signature drink that we ordered, Bret peeling hundred-dollar bills out of his wallet, treating me to everything.

During the day he took me to Golden Gate Park and told me I could pick one of the five destinations inside of it. I chose the Japanese Tea Gardens, and we posed for photos in front of koi ponds and blossoming cherry trees. Afterward, we walked the entire length of Ocean Beach up to Cliff House. He took me to the  Haight record stores, and in one of them I found an out-of-print Woody Allen stand-up record I had wanted.  Then we went back to the hotel and rented porn from the in-room service. We kept one eye on it and rolled around naked, not achieving anything.

The night we got home, I begged him to let me stay one more night at his house, avoiding going home as long as I could. In addition to not wanting the trip to end, I was starting a new position at work the next morning. I was to be an assistant manager at RadioShack in the Bayshore mall. I had been excited about the promotion at first, asking Bret if he thought I should take it. Now, I was dreading long hours, six-day work weeks, and most devastatingly, time away from Bret. When we arrived at his house we made love on the couch and then I stared into the darkness.

I learned the ropes quickly: reports, scheduling, the managerial basics. The part I found difficult was the commitment. I didn’t understand the concept for a long time and considering that aspect of it, I was a terrible assistant manager.

I would spend my lunch breaks walking around the mall purchasing sandwiches from Subway,  lingerie sets from Victoria’s Secret, scented candles from Bath and Bodyworks, and heels from wherever had the highest ones. I really thought I had made it then, filling up the back seat of my car like the arsenal of some strip club’s dressing room.  Some days I loved it there. I would wax romantic and stand behind the heavy metal doors at the employee entrance, smoking cigarettes in the rain.

Once I got off the clock, I was out the door as fast as I could be, trying to meet up with Bret or my friends at the bar. I was scheduled to be on a conference call every Sunday at 8am, and every Saturday I was out drinking or getting high, staying out at a show until 3am. A lot of the time I would sleep through my alarm, but if I was on the call I was on speakerphone. Strange men across the state would bellow about sales reports and metrics, and what batteries we needed to push, while one of my feet made its way from beneath the brown sheets. An atmosphere of tequila rose off my naked body, Bret’s dog having already eaten my abandoned underwear.

As much as I tried to keep my work life from interrupting my personal life, I was trying to keep my personal life from destroying my professional one, too. I would activate a Boost Mobile phone with an Unlimited-calls-to-Mexico plan as I battled a bellicose hangover. I would lead the sales associates around the store, showing them how they were to ‘front’ the merchandise precisely so it laid flat on its display. I would try to half-heartedly convince them of the importance of this while operating on one or two hours of sleep.

I knew Bret was the biggest threat to my performance at this job, yet I protected him fiercely. Between my relationship with him and my job as an assistant manager, the choice was obvious. Dan, my senior manager, had taken a big chance on me. He had plucked me from the staffing of four stores, told me I was bright, had a degree, and had huge potential to go far with this company. If I wanted to, I could retire from this job the way he was set up to do. I could make real money.

Then I would remove myself and look at my position from the outside. I was an assistant manager at RadioShack, not a V.P. in Silicon Valley. I didn’t have a pension or health insurance, and I was doing nothing with my degree in Native American studies. I wasn’t working with local tribes the way I had originally envisioned doing at the beginning of college. I wasn’t working on my master’s degree, and I still couldn’t afford to live without a roommate.

Bret was careful to set clear boundaries with me, only allowing me to spend the night once or twice a week. I dreamed about moving in with him someday, even getting married. I was unrelenting in my devotion to him but we never talked about the future. We always said “I love you,” as if that was as close as either of us could come.

I kept my overnight bag in the back of my car, ready for my costume change at the end of the day. I would slip out of black work pants and a white oxford, smelly and grimy with a day’s work, and slide my aching feet into a pair of extra-long flared jeans, open-toed high heels, and whatever sexy screen-printed strapless number I had picked up on my last visit to Chinatown.

Only once my two worlds collided when Bret showed up at the store one day. I was shocked and thrilled.

“What are you doing here?” I asked. We didn’t even have plans to see each other that evening.

“My car is in the shop. I just dropped it off a couple of blocks away. I figured you could give me a ride home.” I explained with a slight twinge of panic that my shift didn’t end for two more hours. I had him here with me now, unexpectedly, and I was afraid to lose him. Maybe two hours was too long for him to wait. But he did wait, wandering the isles of the store, examining every transistor and soldering iron we had, and when I was done, I took him back to his house where we split a six-pack of beer and then went out.

Usually, Bret would call a cab from the bar a little after midnight and we would stop at a liquor store and pick up some beer to end the night, but there was one weekend when we drank liquor nonstop. On the Sunday, my hangover was particularly intense. I had to open the store at ten and I thought I was going to die. Bret offered me a thick, white, oblong pill.

“Oxycodone,” he said, “it always helps my hangovers.” I swallowed it without further question.

Five hours later, a woman was demanding my attention asking me to explain the difference between prepaid carriers that work on a GSM network and the ones that work on a CDMA. I had been nauseated all morning, but now I was visibly sweating. The woman did not notice or care. I was behind the sales counter, all four associates around me busy ringing up phones, activating plans, selling cameras, helping customers pay their bills. The questions continued but I barely heard her. I asked her to excuse me and left the sales counter to make a little hop-run to the bathroom which was in full view of all the customers.

I didn’t make it. The force of my sickness brought me to my knees and I threw up all over the outside of the bathroom door. It had a clear plastic kick guard, and my vomit caught between the guard and the door, framing my orange sticky shame in a kind of homage. I was in full view of all the customers and all my sales associates. I permitted myself to go on break, leaving my customer with all her questions, demanding who was going to sell her this phone now.

It was three months into our relationship and two months into my job, and we both knew something was missing. We had both hoped we would somehow be able to learn to depend on each other and to trust another person, but our time together was still restricted to drinking and our endless lovemaking.

Instead, we committed our time to our art. Bret with his music, me with my painting, under the guise that it was our true direction in life when we had no idea where we were headed.  I knew he was going to leave me. It finally happened when his band was invited to play a fundraiser at a dance studio at 4pm on a Thursday. It was pirate-themed and poorly attended. I sat in the corner with Rebecca, the girlfriend of the drummer, and we smoked cigarettes all night. She was my only ally. When the music ended, he did not ask me to come home with him.  He left me there in the corner to see how I failed to save the relationship, dressed in a sexy wench costume, a plastic hook for a hand. 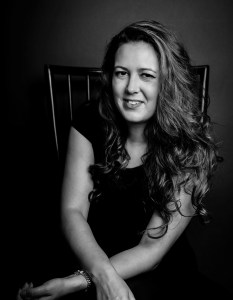 Elaina Erola studied English at Western Washington University and is an Alumni of Humboldt State University. She is currently pursuing a Juris Doctorate from Northwestern California University and has been published in the Seven Gill Shark Review, winning both honorable mention and second place for prose. She has also been published in Toyon Literary magazine and was selected for a scholarship to the 2020 Mendocino Writers Conference as well as third place in their annual writing contest for memoir. She has recently been selected for publication in Bad Bride Magazine. She is working on her first book.

2 thoughts on “A Terrible Assistant Manager”