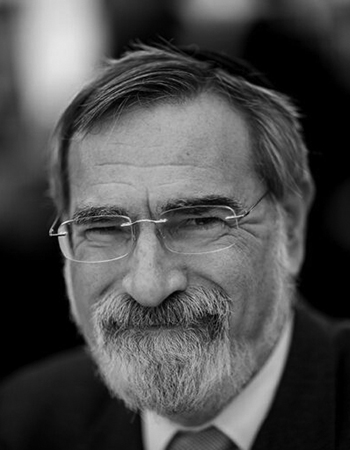 “The essential irreplaceability of persons is what gives love its vulnerability, its openness to loss and grief, its fragility and pathos. It is what separates science (the search for universals) from poetry (the love of particulars). It is also what distinguishes the God of the philosophers from the God of the Hebrew Bible.”

‘We are enlarged by the people who are different than us. We are not threatened by them,’ said Rabbi Jonathan Sacks in a 2010 interview with Krista Tippett. Sacks’ worldview, as put forward in his book The Dignity of Difference, concerned itself with the eradication of difference and diversity by universalist movements that sought to impose single sets of values upon wide swathes of communities. In this excerpt from his book, he suggests that we look to the fundamental tenet of Judaism – that God is God to all people on earth and that there are many paths to salvation – for a foundation from which to celebrate the scope of creation without always trying to whittle diversity down to commonality. It’s our capacity for recognizing uniqueness, Sacks argues, and for loving individuals in a particular way that defines our humanity and opens the path to knowing God and Universal Love. Rabbi Lord Jonathan Sacks was the former Chief Rabbi of the United Hebrew Congregations of the Commonwealth. He passed away on the 7th November.

Judaism has a structural peculiarity so perplexing and profound that though its two daughter monotheisms, Christianity and Islam, took much else from it, they did not adopt this: it is a particularist monotheism. It believes in one God but not in one exclusive path to salvation. The God of the Israelites is the God of all mankind, but the demands made of the Israelites are not asked of all mankind. There is no equivalent in Judaism to the doctrine that extra ecclesiam non est salus, ‘outside the Church there is no salvation’. On the contrary, Judaism’s ancient sages maintained that ‘the pious of the nations have a share in the world to come’. Indeed, the Bible takes it for granted that the God of Israel is not only the God of Israel. He is also the God of Abraham’s contemporary, Melchizedek, king of Salem, not a member of the covenantal family but still a ‘priest of the Most High God’. He is acknowledged by Jethro, Moses’ father-in-law and a Midianite priest, who gives Israel its first lesson in government – the appointment of heads of thousands, hundreds, fifties and tens. Two of the Bible’s heroic women, Tamar and Ruth, are not Israelites. The first is a Canaanite, the second a Moabite, yet each has a place of honour in Israel’s history and both are ancestors of its greatest king, David. How does such an idea arise and what does it imply?

To this I suggest a radical answer. God, the creator of humanity, having made a covenant with all humanity, then turns to one people and commands it to be different, teaching humanity to make space for difference. God may at times be found in human other, the one not like us. Biblical monotheism is not the idea that there is one God and therefore one gateway to His presence. To the contrary, it is the idea that the unity of God is to be found in the diversity of creation. This applies to the natural world. What is real and the proper object of our wonder is not the Platonic form of a leaf but the 250,000 different kinds there actually are; not the quintessential bird but the 9,000 species that exist today; not the metalanguage that embraces all others, but the 6,000 languages still spoken throughout the world. Thanks to our new-found knowledge of DNA we now know that all life in its astonishing complexity had a single origin.

“Biblical monotheism is not the idea that there is one God and therefore one gateway to His presence. To the contrary, it is the idea that the unity of God is to be found in the diversity of creation.”

The same applies to civilizations. The essential message of the Hebrew Bible is that universality – the covenant with Noah – is only the context of and prelude to the irreducible multiplicity of cultures, those systems of meaning by which human beings have sought to understand their relationship to one another, the world and the source of being. Plato’s assertion of the universality of truth is valid when applied to science and the description of what is. It is invalid when applied to ethics, spirituality and our sense of what ought to be. There is a difference between physis and nomos, description and prescription, nature and culture. Cultures are like languages. The world they describe is the same but the ways they do so are almost infinitely varied. English is not French. Italian is not German. Urdu is not Ugaritic. Each language is the product of a specific community and its history, its shared experiences and sensibilities. There is no universal language. There is no way we can speak, communicate or even think without placing ourselves within the constraints of a particular language whose contours were shaped by hundreds of generations of speakers, storytellers, artists and visionaries who came before us, whose legacy we inherit and of whose story we become a part. Within any language we can say something new. No language is fixed, unalterable, complete. What we cannot do is place ourselves outside the particularities of language to arrive at a truth, a way of understanding and responding to the world that applies to everyone at all times. That is not the essence of humanity but an attempt to escape from humanity.

So too in the case of religion. The radical transcendence of God in the Hebrew Bible means that the Infinite lies beyond our finite understanding. God communicates in human language, but there are dimensions of the divine that must forever elude us. As Jews we believe that God has made a covenant with a singular people, but that does not exclude the possibility of other peoples, cultures and faiths finding their own relationship with God within the shared frame of the Noahide laws. These laws constitute, as it were, the depth grammar of the human experience of the divine: of what it is to see the world as God’s work, and humanity as God’s image. God is God of all humanity, but between Babel and the end of days no single faith is the faith of all humanity. Such a narrative would lead us to respect the search for God in people of other faiths and reconcile the particularity of cultures with the universality of the human condition.

“What we cannot do is place ourselves outside the particularities of language to arrive at a truth, a way of understanding and responding to the world that applies to everyone at all times. That is not the essence of humanity but an attempt to escape from humanity.”

This means that though God makes absolute demands of the Jewish people, other than the Noahide laws these demands are not universal. There is a difference, all too often ignored, between absoluteness and universality. I have an absolute obligation to my child, but it is not a universal one. Indeed it is precisely this nonuniversality, this particularity, that constitutes parenthood – the ability to feel a bond with this child, not to all children indiscriminately. That is what makes love, love: not a generalized affection for persons of such-and-such a type, but a particular attachment to this person in his or her uniqueness. This ability to form an absolute bond of loyalty and obligation to someone in particular as opposed to persons-in-general goes to the very core of what we mean by being human. It is the theme explored by Steven Spielberg in his film Al. In it, a couple whose son is in a coma acquire a child-robot that has been programmed to love. The question is whether they can return that love, knowing that he/it is one of a type taken from a production line of dozens of identical products. The answer given by the film is that they cannot, which is almost certainly true and a reason why we should never go down the road of reproductive cloning or anything else that threatens to reduce persons to types. The essential irreplaceability of persons is what gives love its vulnerability, its openness to loss and grief, its fragility and pathos. It is what separates science (the search for universals) from poetry (the love of particulars). It is also what distinguishes the God of the philosophers from the God of the Hebrew Bible.