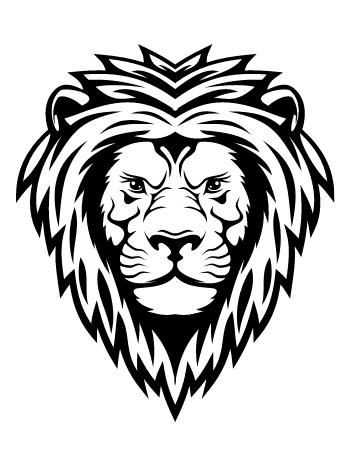 “When the lion, the king of beasts, roars, whatever animals hear the sound are for the most part filled with fear, a sense of urgency, and terror.”

This short sutra from the Saṃyutta Nikāya that tells the story of a lion is an excerpt from The Connected Discourses of the Buddha, translated by Bikkhu Bodhi. The power of the teaching of the Buddha is likened to the roar of the lion – something so strong and vigorous as to send all the other animals running for cover, breaking their bonds, urinating and defecating. This lion’s roar is initially destabilizing, even for the devas – the heavenly, divine beings who were convinced of their longevity, stability and permanence.The lion’s roar is depicted here – a little surprisingly in the context of Buddhist scripture – as a fearful and disruptive but transformative force over all the resident life forms.

At Savatthi. “Bhikkhus, in the evening the lion, the king of beasts, comes out from his lair. Having come out, he stretches himself, surveys the four quarters all around, and roars his lion’s roar three times. Then he sets out in search of game.

“When the lion, the king of beasts, roars, whatever animals hear the sound are for the most part filled with fear, a sense of urgency, and terror. Those who live in holes enter their holes; those who live in the water enter the water; those who live in the woods enter the woods; and the birds fly up into the air. Even those royal bull elephants, bound by strong thongs in the villages, towns, and capital cities, burst and break their bonds asunder; frightened, they urinate and defecate and flee here and there. So powerful, bhikkhus, is the lion, the king of beasts, among the animals, so majestic and mighty.

“So too, bhikkhus, when the Tathagata arises in the world, an arahant, perfectly enlightened, accomplished in true knowledge and conduct, fortunate, knower of the world, unsurpassed leader of persons to be tamed, teacher of devas and humans, the Enlightened One, the Blessed One, he teaches the Dhamma thus: ‘Such is form, such its origin, such its passing away; such is feeling … such is perception … such are volitional formations … such is consciousness, such its origin, such its passing away.’

This is what the Blessed One said. Having said this, the Fortunate One, the Teacher, further said this:

“When the Buddha, through direct knowledge,
Sets in motion the Wheel of Dhamma,
The peerless Teacher in this world
With its devas makes this known:

“The cessation of identity
And the origin of identity,
Also the Noble Eightfold Path
That leads to suffering’s appeasement.

“Then those devas with long life spans,
Beautiful, ablaze with glory,
Are struck with fear, filled with terror,
Like beasts who hear the lion’s roar.

“‘We’ve not transcended identity;
It seems, sir, we’re impermanent,’
So they say having heard the utterance
Of the Arahant, the released Stable One.”

78. The Lion, Saṃyutta Nikāya
From: The Connected Discourses of the Buddha